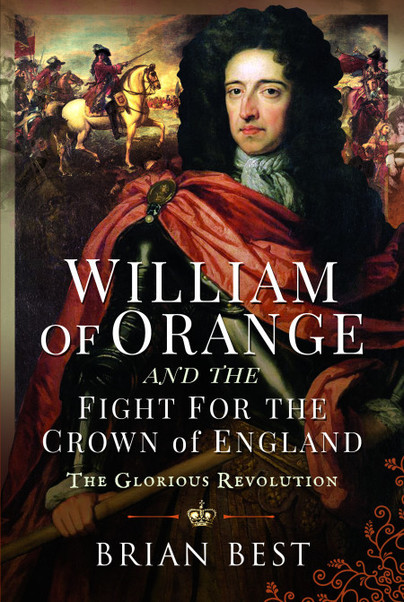 Click here for help on how to download our eBooks
Add to Basket
Add to Wishlist
You'll be £8.99 closer to your next £10.00 credit when you purchase William of Orange and the Fight for the Crown of England. What's this?
Need a currency converter? Check XE.com for live rates

In 1688, a vast fleet of 463 ships, twice the size of the Spanish Armada, put to sea from Holland. On board was William of Orange with 40,000 soldiers – their objective, England. The Protestant William had been encouraged by a group of Church of England bishops to risk everything and oust the Catholic King James. He landed at Tor Bay in Devon and soon gathered enough support, including that of John Churchill, the future Duke of Marlborough, to cause King James to flee to France. It had been seen, in the eyes of most in England and Scotland as a ‘Glorious’ Revolution.

William ascended the throne along with his wife Mary, the daughter of England’s Charles II, who had preceded James. Though the revolution had been virtually bloodless, William had to fight to keep his crown.

Most Irish were Catholics and King William’s armies met stiff opposition there. In this, James saw a chance to regain his crown. Sailing to Ireland, he led his Jacobite troops against William at the Battle of the Boyne on 1 July 1690. James was defeated, ending his hopes of ousting William.

There were also large numbers of Catholics in Scotland, but they too were defeated by William’s army at the Battle of Killiecrankie. This, in turn, led to the infamous Massacre of Glencoe.

The accession of William and Mary to the throne was a landmark moment in British history, one which saw Parliament emerge into the modern state. In January 1689, two months after the Glorious Revolution, Parliament met and in February a Declaration of Rights was incorporated into the Bill of Rights. This included the measure that the crown could not tax without Parliament’s consent or interfere in elections. William, therefore, is not only known both for being one of England’s most revolutionary kings, but also one of the least remembered.


William of Orange is one of those Kings I think often gets forgotten, sometimes deliberately or just because he is less well known than others. In my opinion, we learn plenty of information about military and strategy but not really so much about personal life or personality. Although I suppose his reign was relatively shorter than prominent kings and queens, despite this a lot actually happened during his reign. Such as many different changes and laws passed in parliament, the creation of the Bank of England and a Bill of Rights to name a few. As a European, I think this is probably why he doesn’t get more attention, but I actually think his reign is an important one. I really enjoyed the book as it was informative and read at a good pace, I would say another good book from the author Brian Best. Certainly a book I would recommend.

Essential reading for anyone who wanted to know the real story of how William of Orange became King of England...

However, the author Brian best has written a well researched and readable book. It is easily accessible to everyone. Although you don’t learn too much about William III in the book, the book is instructive about warfare, which is also an important fact from history. The description of the political and war related events were described very clearly by the author. That makes the book interesting and educational. Add to that the author’s pleasant way of writing and you won’t be able to put the book down. You are drawn into it. The book is definitely worth reading.

William III, who reigned with his wife Mary II from 1688 until her death in 1694, and then alone until his own death in 1702 is one of Britain's lesser known monarchs. I have always thought that this was a pity because the momentous changes to the British political system which grew out of the Glorious Revolution are so interesting.

Brian Best has presented us with a well-researched and informative book which is eminently readable. At first it is a little choppy due to the summing up of preceding events, but never fear, once he gets into the real heart of his subject it flows along. I was a little surprised, given the title, that William III did not figure more prominently in the text. Maybe that is why William is not more prominent in history; so many important things happened during his reign that the king himself sort of fades into the background.

I enjoyed this book very much, and recommend it to other readers.

The book gives an interesting and detailed account of these battles and includes in its descriptions, excerpts from those that participated in or witnessed these battles first hand. All sides had their ups and downs, suffered losses and successes and made their share of mistakes. We learn about these, about the different positions they took during the battles and how things turned out for them.

A masterful & captivating journey through the Glorious Revolution and an engrossing portrait of the unprepossessing William of Orange. A very detailed account of all the events behind the power grab set up by the genial couple, the flight of James II and the tireless fight between William and his powerful nemesis Louis XIV. A magnificent tapestry of the tail-end of 17th century England to be enjoyed without any moderation whatsoever!

This is a period of British history that I don’t know much about before, and a King I only know by name. As Brian Best admits in his excellent and informative book, William of Orange (William III) is one of England’s least known monarchs, yet his reign (“The Glorious Revolution”) introduced many lasting changes such as the creation of the Bank of England and the “Bill of Rights”. This limited the powers of the monarchy and set out the rights of Parliament, including the need for regular parliaments, free elections, and freedom of speech in Parliament. It also confirmed certain rights of individuals, including the banning of “cruel and unusual punishments”. But William’s reign was also overshadowed by atrocities such as the massacre at Glencoe.
A few pages in and I’ve already learned that Charles II’s advisors (Lords Clifford, and Arlington, the Duke of Buckingham, and Lords Ashley and Lauderdale) were known by their initials and gave us the word “CABAL”, a fact I was entirely unaware of. No dry history book, author Brian Best takes us on a journey through the tumultuous wars, plots and catastrophes that defined the mid-to late 17th century, beginning with the Restoration of the monarchy after Cromwell when the country was in turmoil and ending with the death of William’s successor, Queen Anne.
The rampant spread of bubonic plague through London resonates strongly with the modern reader, with foreign ships being quarantined in Canvey Island for forty days; and plague victims being buried en masse. Sadly, this was followed closely by the Great Fire of London in 1666. Vivid descriptions of the inferno come courtesy of the ever-present and plucky Samuel Pepys, who would later find himself caught up in the Popish Plot, (instigated by the outrageous chancer Titus Oates), and falsely imprisoned.
The death of Charles II brought the accession of his brother, James. His desire to return England to Catholicism would bring him into conflict with Parliament. His unpopularity led to William of Orange taking the throne, repelling repeated attempts by James to retake his crown over the years. After the failed Monmouth Rebellion, the atrocities of Judge Jeffreys and the “Bloody Assizes” cast a stain on the history of England. Later, the Battle of the Boyne in Ireland becomes probably the most well-known event of William’s reign, with repercussions that still resonate in the country today.
Another excellent slice of history from Pen & Sword, Brian Best’s book is very easy to read, concise and clear. The momentous reign of one of our most neglected monarchs is vividly brought to life and one gets the impression that William was able to take quite a lot of things in his stride, with only the untimely death of his wife, Mary, truly affecting him. Ironically, even though the book is about William, he doesn’t have that much of a presence, which in a way reflects his position in history, but dramatic, lasting changes happened because of his reign, and that will be his legacy.

Very well done! Informative and very well researched without being dry or boring. I had only read historical fiction that touched on William Of Orange and not in a good way. This book sheds alot of the many challenges that he had to face. I also liked the pictures included as it saved me from having to look them up. A definite recommend.