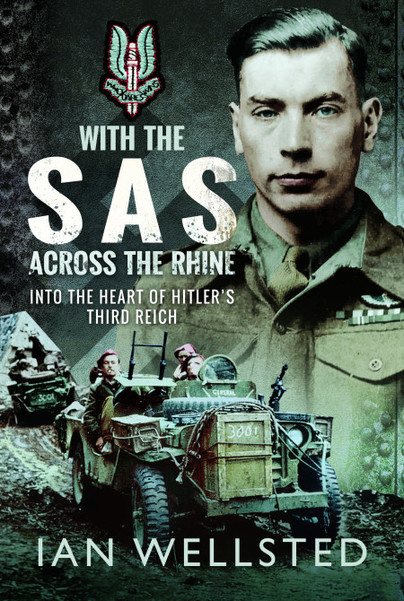 With the SAS: Across the Rhine (Hardback)

Into the Heart of Hitler's Third Reich

Add to Basket
You'll be £15.99 closer to your next £10.00 credit when you purchase With the SAS: Across the Rhine. What's this?
+£4.50 UK Delivery or free UK delivery if order is over £30
(click here for international delivery rates)

With the SAS: Across the Rhine is the story of the latter part of Captain Ian Wellsted’s military career with the Special Air Service, the first part of which was detailed in his well-received SAS: With the Maquis. This is a very personal account, revealing the many emotional as well as physical strains placed upon men in the fighting line.

The author takes us back to his time employed with the 79th Armoured Division (the famous ‘Hobart’s Funnies’) preparing for D-Day and his desire for more exciting action, which led first to the Parachute Regiment and then the SAS. Whilst we learn a little of his time with the maquis, the main focus of the story is his part in Operation Archway. A British special forces mission which involved the 1st and 2nd Special Air Service Regiments acting in support of the advance of Field Marshal Sir Bernard Montgomery's Allied 21st Army Group in operations Varsity and Plunder, this crossing of the Rhine was one of the largest and most diverse operations ever carried out by the SAS.

In this offensive, the SAS teams were thrust deep into German territory, often having to battle their way through the enemy lines to get back to safety. ‘I quickly learned that there was no way to control an SAS battle,’ Wellsted wrote of his first major encounter in charge of a patrol. ‘The din was deafening – seventy odd Vickers and half a dozen Brownings all chattering together. The screech of ricochets and the fire of the enemy made my voice sound like the squeak of a mouse against a church organ. I was helpless.’

In one of these encounters, as the war was drawing to a close, Wellsted’s troop found itself surrounded. In the ensuing firefight, Wellsted was wounded, bringing his active front line career to an end.

I must stress that this is a very good book about the SAS in the latter part of WW2. It contains a wealth of information of great importance to historians, scholars and the casual reader alike but, I had endeavoured not to include this in my simple overview. However, to give a couple of spoilers, and to whet the appetite of potential readers, within the book are details of the French and Belgian SAS, descriptions of weaponry and tactics, and men involved such as Reg Seekings, Paddy Mayne and other 'characters'.