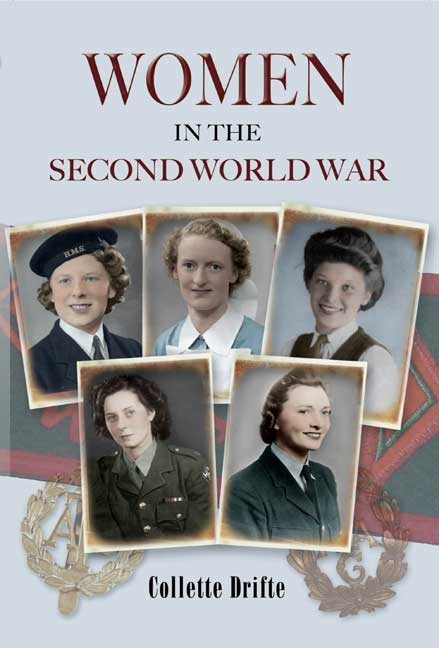 Click here for help on how to download our eBooks
Add to Basket
Add to Wishlist
You'll be £4.99 closer to your next £10.00 credit when you purchase Women in the Second World War. What's this?
Need a currency converter? Check XE.com for live rates

Women in the Second World War explores the experiences of women who served in the armed forces, or complimentary services. Using interviews, anecdotes, memoirs and/or accounts from the women (or, where appropriate, their children), the book tells the women's personal accounts of what their lives were like and what particular experiences they had while serving.

They were all ordinary British women, and tell here in their own words their experiences on active service.

Their accounts cover the whole spectrum, from famous battles, such as Monte Cassino, to being shipwrecked by a tornado, to simple acts of kindness, which in themselves seem nothing, but at the same time meant something very specialto those young women, and were fondly remembered, even sixty years afterwards.

The huge variety of services and experiences featured in the book reflect how widely spread the women's contribution to the war effort was, from tilling the soil below, to servicing the engines of aircraft about to take off to the sky above, and everything in between.

This is a stunning series of autobiographical short stories/memoirs of some of the women who played an active role during World War II, the women in the book served in all of the forces from the WAAF to the Timber Corps and all the stories are fascinating in their own way... It is 5 stars from me without a doubt, it is one of the best books that I have read on the Women of World War II and it is one that I will be very highly recommending. It was an addictive read and I loved it!

From the detailed lives if several women with diverse jobs in each of these services we gain an insight into the widespread role of women in contributing to the war effort.

A fascinating account, this book is for those who want to discover what life was like in the armed forces for their mothers and grandmothers during wartime.

This book has been written just in time. The author was determined that these memories were to be told in the women’s own words. She recalls meeting wonderful ladies in their 80s and 90s with fascinating stories to tell. Other stories came through diligent research and help from sons and daughters, newspapers, magazines and women’s organisations. She had hundreds of replies to her requests.

The first chapters concern the women who joined the three main services as soon as possible, complete with photographs that they had taken. All took to service life and sleeping in dormitories where the black stoves are fondly remembered. They were proud to be helping their country and all were mentioned in dispatches. Of course there were periods of great sadness, bombers did not always return, ships were torpedoed, cities were bombed. Entertainment was not forgotten and the girls were bussed to and from dances. ENSA provided concerts and then the American GIs arrived. All said they enjoyed their war years. The author has added notes where she felt clarification was needed but they do not intrude into the women’s stories. This is a must read book. It is unforgettable.

The British war effort during the Second World War relied on a increasingly large scale mobilisation of women, who filled just about every non front line combat role.

Most of this book consists of a series of first hand reminiscences produced by the women themselves. The three uniformed services (ATS, WAAF and WRNS) take up the bulk of the book, but a wide range of civilian service is also recognised, including the Land Army, the Timber Corps, the Voluntary Aid Detachment, Queen Alexandra's Imperial Nursing Service, the National Fire Service and the NAAFI.

The final chapter takes a different approach, and looks at the stories of three women who served with the SOE and paid the ultimate price.
The first four chapters are by far the most useful part of the book. The women tell their own compelling tales, mostly (but not entirely) positive. None report regretting their service and most enjoyed it, but what stands out is the matter of fact way in which they narrate some fairly horrendous events.

This book is a fitting tribute to a remarkable group of people whose contribution to the Allied victory deserves to be commemorated.

Women in the Second World War - Paying tribute to the women who went to war.

It contains a cache of memories that will now be preserved for posterity.

This book explores the experiences of women who served in the armed forces or complimentary services, full of personal anecdotes,memoirs and using interviews from the women concerned. It is an interesting insight into how WW2 was to involve women in a variety of roles during that period
Wonderful ladies with amazing stories.

Collette Drifte is a widely published author who resides in Northumberland, and this is her first non-education book. And it also features the story of her own mothers experiences in WW2

What a great book, I'll be honest when I saw I was reviewing a military book I thought 'why me!'.

I was very very surprised I couldn't put it down, just a shame I no longer have the ability to stay awake for 36 hrs plus, not that it would take that long but fitting it around work was an issue - I wanted to stay home and read more.
t gives an insight into the lives of a number of women who gave up a period of their lives in order to help the war effort. It also makes me realise how easy my life is today.
I was particularly interested in reading about the adventures of the SOE girls - WOW how brave were they, and a lot paid the ultimate sacrifice for our country.

I have to give this 5 wine glasses as I seriously could not put it down ( the book arrived with me in the post Wednesday afternoon, and I have had three rather busy days in work to fit in around my reading).

These fascinating stories show just how great women's contribution to the war effort was.