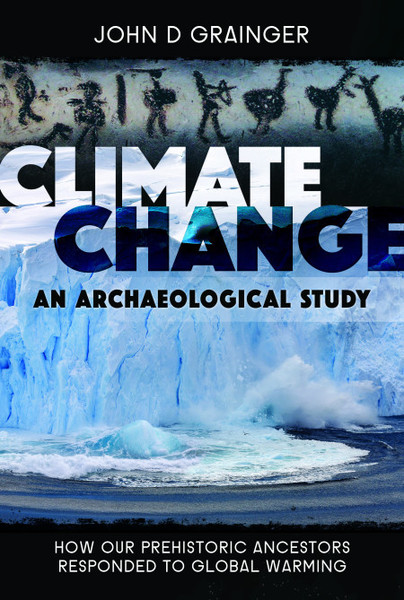 Climate Change – how we coped in the past.

The current excitement over the change which is taking place in the world’s climate, blamed overwhelmingly on human activity, has been considered almost entirely from the human experience in the last two or three centuries.

It is, however, by no means the first time that the world has been subjected to climate change on a massive scale. The last 10,000 years are regarded by climatologists as the ‘optimum’, which only means that it has been the time when the climate has been more or less steady. Yet even in that period there have been warmer periods and colder – the ‘Little Ice Age’ of the 16th to 18th centuries is an example.

But those fluctuations from the ‘optimum’ were minor compared with what had gone before. Before 10,000 years ago the world was gripped by the last stage of the great Ice Age, which had lasted perhaps 30,000 years. Yet this was only the last stage; there had been massive and repeated climatic fluctuations over the previous half million years. That is to say, the ‘optimum’ climatic period is actually the latest stage in a long period of fluctuating climate which we generally referred to as the Ice Age.

What is different about the last 10,000 years is that during that period mankind began to take control of his existence; a series of experiments were undertaken to find out ways of improving mankind’s existence, increasing his well-being, and developing his wealth.

These experiments took place in widely spread parts of the world. In America ancestors of the American Indians expanded from occupying Alaska to take possession of the whole of the great double continent; there appear to have been people there already, but the massive changes at the end of the Ice Age, especially in North America, allowed a much more enterprising group of people to take possession of the land. Within 6000 or 7000 years they had occupied the whole territory as far south as Tierra del Fuego and had begun experimenting with agriculture and in Mexico and Peru were developing a civilised lifestyle.

The people they had left behind in Siberia were instrumental in inventing pottery, one of those apparently minor developments which made life easier for everyone – carrying liquids, storing food, cooking, all these became easier. This seems to have taken place during the last stages of the Ice Age about 14,000 years ago.

In New Guinea the warming of the world drastically changed the environment of the island, and drove some groups in the hills to develop new ways of obtaining food; we would call this horticulture (rather than agriculture), growing food plants in small plots of land watered by canals and ditches. One of their domestications was the banana.

In Europe the ice which had covered the land from northern Germany northwards gradually diminished. The melting of the ice there and in other parts of the world increased the sea level bt perhaps 300 feet. The North Sea and the English Channel became flooded (and Britain and Ireland became islands). This happened throughout the world, most drastically in Southeast Asia which had been dry land and was converted into the modern archipelago of Indonesia.

The quantity of land available for the hunters expanded as the ice melted. In Europe and Asia the great animals of the Ice Age, notably mammoths, died out and the hunters had to depend on killing smaller and faster animals, such as birds and deer. To cope they resorted to inventions – bows and arrows, fishing harpoons, woven nets, and increasingly sophisticated manufactured flints.

In some regions a successful lifestyle based on foraging developed. This was notably the case in Japan where communities settled down in one particular place and foraged regularly within a defined territory. This became the basic means of subsistence for several thousands of years. In the process they adopted their Siberian neighbours’ invention of pottery and created things of beauty as well as usefulness.

All these were developments forced on mankind by the drastic changes that were taking place in the climate, which in turn was forcing change in their several environments. All were successful in providing food, shelter, and resources to the small communities of hunters and villagers which developed. In some places, however, the change was even more drastic. In the Middle East the climate change forced the environment to go from forest to desert in a relatively short time. The borders of the desert produced grasses whose seeds could be captured, ground, and converted into food by baking, and soon it was worked out that the seeds could also be planted and harvested. At much the same time several animals were domesticated. This had already happened with dogs, domesticated by hunters during the Ice Age; now it was the turn of sheep and goats, cattle, and other animals.

This domestication of plants and animals proved to be the most successful of all the experiments which have been driven by the change from the Ice Age to the ‘optimum’ climate. It was something which happened several times in several different parts of the world. In the Middle East it was wheat and barley, sheep and goats; in Africa it was cattle and millet; in America it was maize, squashes, llamas; in China it was rice. Some of these inventions were independent; in other cases it was the idea of domestication which arrived by rumour and through travellers, and was applied to local plants and animals.

The change in the climate which occasioned all these inventions and developments was infinitely more drastic than anything we are facing now. The suggested increase in the temperature of the world over the next century if nothing is done (or even if all amelioration methods are applied) is about 2 degrees centigrade. The change from the Ice Age to the optimum was four times that, about 8 degrees centigrade, or about 14.5 degrees Fahrenheit.

The lesson we may learn is that it might be best in coping with the change to go with the flow and develop means to live with it. The answer lies in technology.

Climate Change: An Archaeological Study is on special offer here.