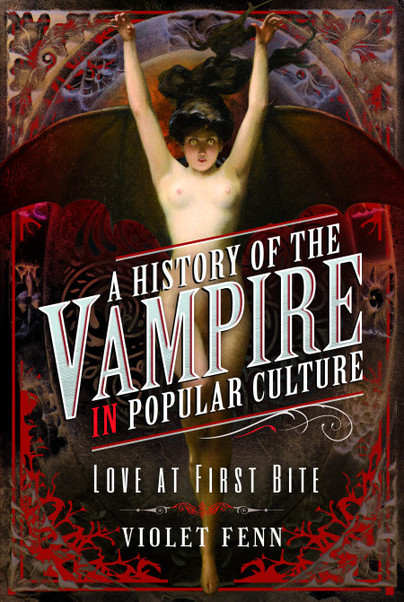 Although vampires as we know them have only existed since the late 1700s (more on that later), versions of them have been documented for millennia. Back in the mists of time, people were more likely to write about revenants. Literally the ‘undead’, revenants were those people who refused to take death lying down. Tales were told of corpses clambering from their graves in order to hunt down those who had wronged them in life, often sucking the life force from those they’d left behind. King James (he of Bible translation fame) wrote his Daemonology dissertation in 1597, in which he goes into great detail about how an undead demon might steal a human man’s ‘seed’ in order to use it himself to seduce and impregnate an unfortunate woman.

The 18th and 19th centuries were a time of illness spreading through increasingly closely-packed towns and cities, but without the scientific understanding of causes or cures. In 1732, Johann Flückinger was sent to a village in Serbia to investigate a series of supposed vampire attacks, which the locals were blaming on a man who had died seven years earlier. Before his death (he had fallen from a hay wagon and broken his neck) Arnold Paole had claimed to have himself fought off a vampire attack some time earlier. So when others in the village began following him to the grave, the obvious answer was vampirism.

This being the age of the burgeoning media industry, the story was told and retold across varying news outlets, Paole’s tale sometimes being slightly rewritten and presented as a ‘new’ story of rural vampirism. Under Flückingers supervision, the graves of suspect villagers were disinterred and locals declared that the corpses’ bloated appearance and blood-stained mouths was ‘proof’ that they had been feeding on the living. In reality, the appearance would have been from the normal process of decomposition, but in a less enlightened age, many preferred to stick with a more familiar supernatural explanation.

So how did undead corpse-munchers turn into the darkly seductive and glamorous creatures of the night that we know today? We can lay that pretty firmly at the door of one Lord Byron, poet and renowned society personality.

German poet Heinrich Ossenfelder had written Der Vampire in 1748 (possibly the earliest literary adaptation of the ‘modern’ vampire, albeit one who’s intent on sexual assault), but it wasn’t until John William Polidori’s novella The Vampyre was published in 1819 that the ‘modern’ vampire developed an afterlife of its own. The Vampyre was itself based on a snippet of writing that Byron had produced during his infamous stay at the Villa Diodati in 1816, during which the group of friends had challenged each other to write a ghost story. The most famous tale to come from that gathering is by far Mary Shelley’s Frankenstein, but Polidori—there in his role as Byron’s personal physician—clearly spotted the potential in a fragment of story that Byron had begun but then discarded (Byron had titled it, quite literally, A Fragment). With his boss’s permission, Polidori took the beginnings of the story and ran with it, developing a tale of an elegant gentleman who seduced women and drained them of life. As well as creating a protagonist as well dressed and urbane as the infamous Byron, Polidori went so far as to name this devilish character ‘Lord Ruthven’—the name used by Lady Caroline Lamb for her thinly disguised portrayal of Byron (her erstwhile lover) in her bestselling novel Glenarvon, which had been published earlier in the year of that infamous villa holiday.

The Vampyre’s publication in 1819 set the template for the ‘classic’ vampire from then on—and the publication of Bram Stoker’s Dracula in 1897 simply reinforced Polidori’s tropes as being the traditional image.

You can tell if someone’s secretly a bloodsucker by checking their teeth, right? Actually, no. Nowhere in Dracula does Stoker mention fangs (and neither did Polidori). Count Dracula has ‘sharp-looking’ and ‘white as ivory’ teeth, but nothing more than that. Nosferatu, Murnau’s cinematic adaptation of the Dracula story (for which he’d been refused permission, hence changing salient details in a failed attempt to avoid litigation) portrayed its eponymous vampire as having rat-like teeth. Even Bela Lugosi’s immortal appearance as the Count showed him with human-like teeth.

Vampire dental design differs in many interpretations of the legends, even to this day. Those we would consider ‘classic’ vampire teeth – True Blood, The Lost Boys – actually have fangs next to the centre teeth, not where our own incisors are (and from where we tend to assume vampires would bite). And the Twilight vampires—perhaps the most famous modern bloodsuckers of all—don’t have fangs at all. The Cullens et al have to make do with human teeth, albeit ‘razor-sharp’ ones. Which probably explains why Edward is nervous about kissing Bella.

A vampire’s reflection will show up in a mirror

This theory is based on the idea that mirrors are backed with silver. Silver had long been considered a ‘pure’ metal which would refuse to reflect those unworthy of it, hence a vampire’s non-appearance. But modern mirrors have long been backed with aluminium, which has no such bias.

The idea of vampires not having a reflection has been used to good effect in fiction. True Blood’s Sookie Stackhouse asks her vampiric lover Bill Compton how she can see him in the mirror and he explains that it helps them to hide in plain sight. If the general populace is led to believe that vampires don’t have a reflection, then by default, anyone who does have one can’t possibly be a vampire.

This is another detail that was first used by Murnau in the hope of differentiating Nosferatu from its source material. In Dracula, the Count does avoid daylight, but only because he is weakened by it and therefore vulnerable. Count Orlock, in contrast, dramatically collapses and disintegrates as the sun comes up.

Again, the trope is used in various different ways – the True Blood vampires are literally ‘dead until dark’, whilst those living in the Twilight universe just pop on some shades in a futile attempt to dim their own sparkle.

In short, all vampires are different—and the only thing they have in common is that they bear almost no resemblance to their real life origins.

A History of the Vampire in Popular Culture is available to order here.