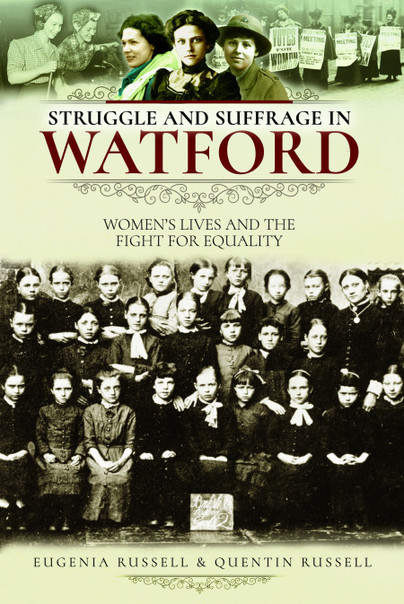 This September a new social history study about women’s lives in Watford appears under Pen & Sword History. Struggle and Suffrage in Watford (1850–1950) by Eugenia and Quentin Russell is the first social history about women to be written specifically about Watford. It throws light on the lives, hopes and struggles of women in the Watford area (or South West Hertfordshire, traditionally served by the Watford Observer newspaper).

This is the third book on Watford by the authors, with Watford & South West Herts in the Great War and Watford at War 1939–1945 also available from Pen & Sword. While all three books are concerned with the impact locally of national and world events, especially on the lives of ordinary people, and with the determination, resourcefulness and perseverance individuals and groups have had to show, the period covered by the latest book is one of immense social change, especially for women. By telling the individual stories of the women of the time, enhanced by contemporary and modern illustrations, it is possible to see how national trends played out at the local level. A copious bibliography is provided for those who would like to explore the subject further.

The first two books have received a wonderful reception locally so far and they are available in public libraries across the county, from bookshops in Watford, Hemel Hempstead and Barnet as well as online from Pen & Sword. Beyond the Watford area they present a tempting read to researchers and readers with a passion for social history as they delve into many case studies that are indicative of broader regional and national trends.

Struggle and Suffrage in Watford is organized into three chapters entitled ‘Mid-Victorians: 1850–1880’, ‘The New Woman: 1880–1914’ and ‘War and Peace: 1914–1950’ and there is also a detailed timeline of ‘Important Dates in British Women’s History’. As the town grew rapidly over the 100-year period, the story of its inhabitants shifts from that of a traditional relationship between gentry, with their servants, mainly women, and the often rural poor, to the growth of the industrial class and middle class, the arrival of commuters and the decline of the old hierarchies after two world wars, all reflected in the changing lives of women and their aspirations. The old world cosiness of master and servant is told through the diary of Adela, the young daughter of the Earl of Essex, but this then gives way to the desires and aspirations of the ‘New Woman’ and the Suffragettes as the 19th century closes. Several household names feature in the book’s pages, among them Isabella (Mrs) Beeton, who wrote her famous cookbook from her nearby home in Hatch End; Vera Brittain, who spoke on behalf of the League of Nations in the Watford Baptist Hall in 1921 and in 1924 campaigned to unseat Watford’s sitting Unionist MP, Dennis Herbert, in the hope of forwarding women’s rights by electing the feminist Liberal candidate Margaret Corbett Ashby; and the Pankhurst family, friends of local artist and suffragist activist Georgina Brackenbury.

Alongside the famous are the lives of the ordinary women in Watford’s slums or working in the silk mills, as straw plaiters, in the surrounding countryside, servants and maids or later as teachers, shop assistants, businesswomen and in times of crisis munitions workers. Prominent among the progressive women were the artists drawn to the artistic community established in nearby Bushey. Lucy Kemp-Welch, the great animal painter and art teacher, is perhaps the most well known, but there were a number of other talented artists locally, some of whom benefitted from the pioneering Herkomer Art School which took women, including the sculptress Mary Pownall Bromet, a former student of Rodin.

Education had an important role to play in improving women’s lives and a number of schools are examined closely. Teaching was one of the first routes by which women could escape from traditional expectations. Although, Mrs. Elizabeth Fuller, known as Dame Fuller, is fondly remembered in Watford for the endowment in 1708 of a school for its ‘poor inhabitants’, which has today become two separate schools, the Watford Grammar Schools for Girls and Boys respectively. It was the classroom teachers who made the real difference. The logbook of Mrs Mary Eliza Forsdyke, Headmistress at the Bushey Board School for Girls and Infants for twenty-five years during the latter 19th century, supplies some of the intriguing insights into the state of schooling at the time. At the beginning of the period traditionally, at least for those who could afford it, the role of women was definitely in the home. But even in these times there were some who bucked the trend, and the number of women taking the reigns in business was only to increase, such as Clara ‘granny’ Duce, who ran the Wholesale and Retail Fish Merchant, her family becoming market leaders with four shops in Watford and another three further afield and Jane Farmer, owner of two grocery shops. Inn-keeping was an early occupation for a woman and on a larger scale Maria Benskin and Mary Ann Sedgwick ran the Watford’s two most successful breweries, Benskin’s and Sedgwick’s.

For the lower classes, childrearing and housework had to be combined with the necessity of paid labour. In the countryside there was farm work or straw plaiting, which could be highly profitable for skilled women, and in the vicinity of the town silk and paper mills. Eventually Watford became a major centre of the print industry and during the world wars the paper manufacturer John Dickinson & Co. and the print companies Sun Engraving and Odhams Press, already with large female workforces became major employers of munitions workers. By then the town had become a significant area for light engineering, which proved a desirable target for German bombers, and a centre for aircraft production and it was not only women that produced the shells but women who built the Mosquito, Wellington and Lancaster bombers built locally. The two world wars were to change social attitudes considerably and the idealism that fashioned the new Britain, and the new Watford, that was built in their aftermath was to hasten the revolution in women’s lives. No longer was service on the Lord’s estates or later in middle class homes to be one of the most significant occupations for a young girl or woman. Educated women had learnt how to be equal with men and had the desire to take on what had been regarded as men’s roles. After WW1 they were no longer content to be nurses but wanted to be doctors too. Soon all the professions were to open up, but the post war world of the 1950s and beyond is another story.

Struggle and Suffrage in Watford will delight and surprise you. In exploring the lives of women in and around Watford from 1850–1950, both at home and at work, it puts the experiences of rich and poor into the context of changes in national attitudes, lifestyles, employment and education. Its pages are filled with fascinating stories about how our past has shaped our future. Struggle and Suffrage in Watford is available for pre-order now.

You can preorder your copy here.