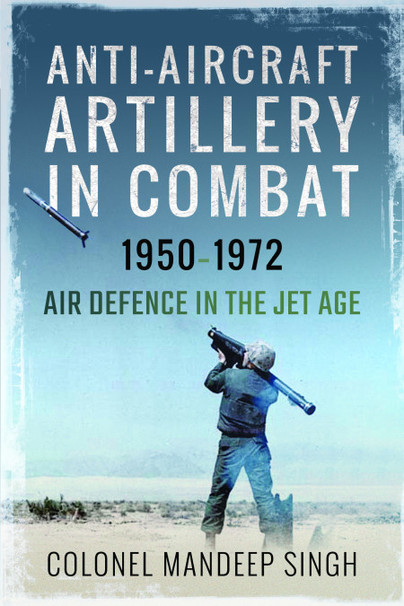 The aircraft came in low, bearing straight towards the radar. The silhouette was familiar, that of a Canberra with large wings. As this was a prohibited zone, barred to own aircraft, there was no reason to doubt that the aircraft flying so close to the radar was anything but an enemy aircraft. The Ack Ack commander had no information, no prior warning of any friendlies in the area. The orders were clear – to shoot down any intruders. The aircraft was marked with the green and white roundals of Pakistan Air Force which are quite distinct from that of Indian Air Force. Maybe they were not noticed by the AA gunners. Maybe the repeated runs of the aircraft towards the radar made the AA gunners classify it as an enemy. Whatever the reasons were, it may never be known. The AA guns opened up as the Detachment Commander ordered them to engage the intruder. The guns spit out fire and soon enough the aircraft was hit. Trailing smoke, it lost control and crashed. Both the pilot and the navigator were killed.

Fishoil, the Amritsar radar had claimed yet another victim. Only the AA guns that shot down the Droopy were of Pakistani Army and the radar where the incident took place was at Rahwali in Pakistan. To understand how this all was linked to the Indian Air Force radar at Amritsar, we need to step back a little.

United States carried out a total of ten reconnaissance flights with U-2 Dragon Lady from Pakistan between 1957 and 1960 as part of Operation Grand Slam. The operation came to a halt on 1st May 1960, USA with the shooting down of Gary Powers, leaving a void in the high-altitude reconnaissance capability of the United States. The void was aggravated as Pakistan had evicted the US Navy mission operating out of Peshawar to monitor Soviet missile test ranges, especially the Kapustin Yar range, after repeated violations of Indian and Afghan airspace by the US Navy aircraft. The US intelligence void needed to be filled up, sooner rather than later.

It was in this context that US Air Force (USAF) approached General Dynamics in March 1962 with a contract to study and develop a re-configured B-57 for high-altitude missions. As the new configuration aircraft was being developed, Pakistan agreed to resumption of surveillance flights on the conditions that the flights would be flown by Pakistan Air Force crew with aircraft provided by USA and that aircraft be similar to or identical to one of the aircrafts in Pakistan Air Force inventory. It was for this reason that B-57 was selected for the mission code named Little Cloud and Pakistan Air Force received two RB-57B to continue with the surveillance mission.

The aircraft subsequently developed by General Dynamics were the RB-57F. With a wing span of 121 feet, which was almost double the 68 feet long fuselage, the design of RB-57F was such that it should have had four engines though General Dynamics circumvented the requirement by replacing the Wright J-65 engines with Pratt & Whitney TF-33P-11 engines which more than doubled its power. In addition, air started J60-P-9 turbojets were mounted in detachable pods for extra thrust. Pakistan received two of the RB-57F (called the PEE WEE 1 and 2) which were operated by its No 24 Squadron, along with two RIVET FLASH RB-57B’s. designed to operate way above the range of ground air defences, these aircraft were the most advanced surveillance aircraft in South Asia and were used to great effect by Pakistan Air Force. But how did the entire project came to be undone by 1965, with more than a little help of anti-aircraft artillery, makes for an interesting story.

When the India Pakistan War started in September 1965, India had two radars– at Barnala in the West and Shillong in the East, capable of any serious surveillance capability. For CGI functions, the only radar was a Soviet P-30(M) radar located at Amritsar. Other than this, India had only a low power radars, located at Jammu, Patiala and Ferozepur.

The Amritsar radar unit was the 230 Signal Unit, IAF and was under No 1 Air Defence Direction Centre(ADDC). As per the laid down standard operating procedure, the Amritsar radar was to pass on the air information to the Air Defence Control Centre at Adampur which in turn informed the Air Defence Control Centre (ADCC) at Ambala. The concerned air base received the relevant information form the ADCC. It was a rather circuitous route of passing information and was to prove disastrous the very first day of the war.

The first air strike against the Amritsar radar was on 6th September 1965 and was carried out at dusk by four F-86Fs led by Wing Commander Mohammad Shamim as they took off at 17:40 hours. Accompanying the Sabres was an RB-57B flown by Squadron Leader Rashid. The RB-57B was to home on to the radar and lead the Sabres. However, the onboard electronic equipment of the RB-57B developed technical snag and the mission had to be aborted.

The second RB-57B was airborne at that time and it was decided to use it for the strike mission. The F-86F’s, low on fuel, refuelled at Sargodha and rendezvoused with the ELINT aircraft. The RB-57B led the F-86’s to the radar and as it overflew the site, the L/60 gunners engaged it, knocking off one of its engines with their intense fire forcing it to abort the mission. Squadron Leader Iqbal nursed back his stricken aircraft to Peshawar, with one engine. Unable to locate the radar without the ELINT aircraft, the Sabres aborted the mission.

The first of the four RB-57s had been hit and put out of service.

Frustrated at not being able to go through with the strike against Amritsar radar due to lack of information on its exact location, Pakistan Air Force decided to carry out a Photo Reconnaissance (PR) mission to try and pinpoint the radar’s location. The responsibility for this fell on No 20 Squadron and its RT-33 aircraft. The PR sortie was carried out by Squadron leader Mubraiz-ud-Din. The PR mission was a success and PAF now had what they considered as workable intelligence to plan their next raid to take out the radar. Pakistan Air Force carried out a raid on 7th September, at about 09:10 hours a but the radar remained unharmed. This was followed by four raids on 8th and 9th September.

Pakistan Air Force returned the next day in strength, first with four F-86s escorted by two F-104s and then by eight F-86s in the next raid. Some damage was caused to the radar but it was soon back on air. The raid on 11th September caused the most damage but not serious enough to put it out of service for long. Worse, Pakistan Air Force lost Squadron Leader Muniruddin Ahmed – the first loss to be officially acknowledged by Pakistan.

The repeated failure to put the radar out of service made the Pakistanis rethink their tactics and they decided the next raid would be carried out by B-57 bombers, to be led by an RB-57B. As the RB-57B had failed to locate the radar on the previous occasion, Squadron Leader Muhammad Iqbal, Officer Commanding the No.24 ELINT Squadron along with his navigator Saifullah Lodhi decided to carry out a practice homing mission using the PAF’s radar unit near Rahwali as the target. The PAF did not have any Army AA allotted for its air defence and was considered a safe target to practice. Only, the PAF Commander at Rahwali had liaised with the nearby Army Air Defence unit and got some guns for its protection. As Muhammad Iqbal and his navigator Saifullah Lodhi were busy practicing the ‘homing’ runs, the Pakistan Army AA unit deployed around the radar system opened fire on the diving RB-57B, shooting it down. Both Iqbal and Lodhi were killed in the crash.

Pakistan Air Force had lost the second RB-57B to Fishoil, albeit indirectly. As Iqbal had been associated with the RB-57F overflight programme right from the inception, his loss meant the the end of the Pakistani RB-57F missions though the one remaining RB-57F was used to carry out one reconnaissance mission after the war on 15 October 1965. This time around, it was a SA-2 that managed to hit the RB-57F as it had just started its descent. The damaged RB-57F managed to limp back to its base where it was patched up, but not satisfactorily enough. The bird had to be sent back to United States for repairs – joining the first RB-57F already at the depot for repairs. The RB-57Fs were never sent back to Pakistan.

Fishoil, that stubborn old radar and the vintage AA guns had put an end to the RB-57 program of Pakistan.

P.S. Just six years later, India and Pakistan again went to war. Fishoil was again one of the prime targets. On the second day of the war, Paksitan Air Force attacked the radar, using its top of the line F-104 starfighters only to have one shot down by the 40mm L/70 AA guns. It was the first loss of a F-104 to the Ack Ack. Fishoil was to prove a nemesis for the Pakistan Air Force, once again. But then that is another story.

Learn more in Anti-Aircraft Artillery in Combat, 1950-1972 which available to preorder here.