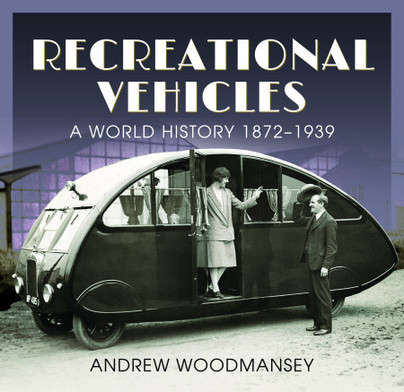 “There is one wholesome lesson everyone learns when caravanning – to think more, to talk less”.

This is one of many insights of the UK Caravan Club’s first Secretary, J. Harris Stone, included in his 1914 book Caravanning and Camping Out. My new book on the early history of recreational vehicles (RVs) was inspired by this advice. It offers both RV enthusiasts and casual campers the opportunity to take a pause from their breathless RV travels or video-streamed van restorations to contemplate where RVs came from and perhaps where they might be going. It’s also a book which re-writes RV history.

RVs are a curious form of personal transport that emerged from obscurity and mild derision in the late 1800s to play an important role in our leisure history. They were not invented but evolved over many years as hybrids of other vehicles including gypsy vardos, living vans and even bathing machines. What is remarkable in this story is that the efforts of a few early maverick RV builders and users in a handful of countries has led to the birth of a hobby which today encompasses over 15 million RVs worldwide. Thanks to the dramatic increase in the number of early newspapers and photos that have been digitised in recent years, we now have unparalleled access to the stories behind these pioneers and their quirky ‘houses on wheels’.

“No life separates a man more from his former self, or gives him a better chance of regeneration of the most complete kind, than that of the gentleman gipsy” wrote one of these pioneers, Dr. Gordon Stables, in 1886. Stables’ travels through the British countryside in his horse-drawn caravan, The Wanderer, were described by newspaper reporters in several countries. His positive accounts of caravanning defied the prevailing and not unfounded sentiment that anyone travelling for fun on muddy, pothole-ridden roads under constant threat of either highway robbery or being shot at by farmers was clearly a crackpot. In part due to Stables’ defiance of Victorian convention, many thousands of travellers regenerate themselves in RVs today.

Stables’ love of leisure caravan travel inspired the ‘gentleman gypsy’ movement in Britain from about 1890 until the start of World War One. Contrary to current belief, gypsies were not the first to live in horse-drawn caravans. It was instead roving circus and menagerie owners who first started using horse-drawn caravans as mobile accommodation in Europe in the early 1800s. Gypsies were still using ‘bender’ tents at the time and did not start using caravans until the 1850s.

We also now know that although Stables’ Wanderer of about 1884 was as far as we can tell the first purpose-built leisure caravan, Stables himself was not the first leisure caravanner. Two sons of the Duke of Essex were eating roast hedgehog and trout from a silver plate on their gypsy caravan holiday in Wales in 1883. The idea, although probably not carried out, of building a caravan designed specifically for leisure was discussed in an English newspaper in 1872.

In North America, new research findings mean that we must now sadly deflate the romantic notion that the covered wagon was the inspiration for the first horse-drawn RVs there. Instead it was features of the ambulance wagon that were mainly found in the first horse-drawn RVs in North America. Those using RVs today to escape the global pandemic may be interested to learn that these relatively comfortable wagons were used by so-called ‘heath-seekers’ to escape the consumption (tuberculosis) outbreaks on North America’s east coast in the mid to late nineteenth century. The self-built ‘houses on wheels’ of the 1890s often adopted the flat floors, soft springs and box shape of the ambulance wagon to convey their occupants. The health seekers of the late nineteenth century were among the pioneers of health-based travel in nature that is the motivation for much RV usage today. History is repeating itself.

It is a pleasure in this book to introduce to a wider audience some lesser-known RV pioneers. Alonzo J. McMaster of New York, for example, patented his McMaster Camping Car in 1889 just a few years after The Wanderer. It had many novel features including a combined driver’s seat and oil stove, an ice box with a floating shelf and a ladder slung under the wagon that was also used as a bed. Two of McMaster’s camping cars were hired out by camping concession holders Wylie & Wilson in Yellowstone National Park for the 1892 season. So far as we know it was the first purpose-built RV in the USA.

Another lesser-known RV pioneer is Charles Louvet of France. He single-handedly built incredible, aircraft-inspired RVs during the 1920s and 30s. Louvet built the first-known coachbuilt motorhome in about 1923 and a 58-foot-long extendible travel trailer in 1934. The man who conceived the Road Yacht featured on the front cover of my book, UK politician Noel Pemberton Billing, is well known, notorious even for many things. But few know that he also came up with this unusual motorhome. When he tried to sell his Road Yacht in 1927 in the USA he couldn’t find a buyer. This may be because one British journalist had described his RV as a ‘Brobdingnagian garden slug’. How to kill off a new vehicle in three words.

Thanks to new research the history of the powered RV needs some fine tuning. For some reason the year 1910 is seen as significant in the history of the American RV, possibly because it was the year in which the Pierce-Arrow Touring Landau was built. But a similar touring landau was built a year earlier by Welch Motor Corporation in 1909. The concept was first developed by De Dietrich of France in 1904. On the other hand, truck-based ‘camp cars’ were in use in the Boston area from 1904 and are more likely contenders for the title of first American powered RV.

In later life aviator Glenn Curtiss became a pioneering RV designer. His Aerocar twinned with the Aero Coupler hitch of 1928 revolutionised the safety and comfort of fifth wheel RVs. However his prototype, recreational ‘fifth-wheeler’ of about 1918 was not, as currently thought, the first. That honour should now go to vehicle manufacturer Auto-Mixte Pescatore of Belgium who built a massive and luxurious fifth-wheeler for Baron Crawhez in 1913.

Some of the most fascinating of these new RV discoveries are the steam-driven RVs of France built at the turn of the last century. Weighing up to ten tons including a ton of coal, these lumbering giants had to travel close to rivers so their water boilers could be replenished frequently. They include the Grande Diligence of Prince Oldenburg (1896) and probably the first ever powered motorhome, the Quo Vadis (1900).

The book is the first international history of the RV. It has chapters on the early RVs of the UK, USA, France, Germany, Australia and New Zealand. It also features some RV designs that were adapted for non-leisure purposes such as business, education and health. It contains many RV design ideas of yesterday which may surprise and even inspire today’s army of van builders.

In 1886 Dr. Gordon Stables wrote, “There is to my way of thinking a delicious uncertainty in starting on a long caravan tour, without being aware in the least what you are going to do or see, or even what route you are going to take”. Let’s hope that the routes taken by RVs worldwide continue to remain uncertain, but that RV history has now become a little less so.

Andrew Woodmansey is an RV historian based in Sydney, Australia. His book Recreational Vehicles: A World History 1872-1939 is published by Pen & Sword and is available to buy here. Andrew also has a blog at rvhistory.com.