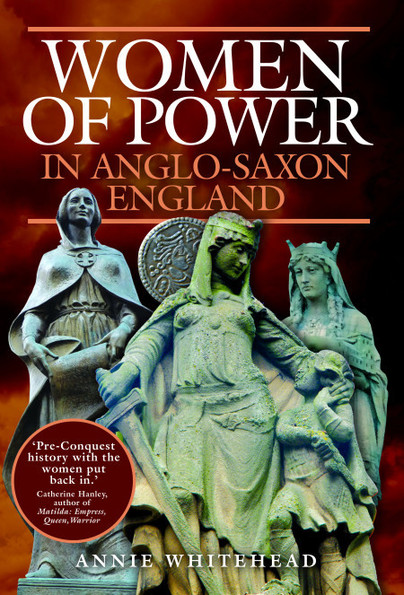 When I set out to write my book, Women of Power in Anglo-Saxon England, I knew I had a task on my hands to find the women’s stories. Often there is an assumption that we know little about them (which to an extent is true) and that they had little say over their lives and few rights in law (less true). Scouring the sources I was able to find a lot of detail about these women and their tales are often surprising; they may make you reassess the pre-Conquest era. Admittedly, a lot of these women were exceptions, but they were remarkable in their achievements and status.

A member of a powerful midlands family, she had two sons by King Cnut. Cnut remarried while Ælfgifu was still alive but she wasn’t put aside in the way that earlier first wives of English kings had been. His second wife, Emma, the widow of Æthelred the Unready, was important to Cnut, but so too was Ælfgifu. Cnut had an empire to rule, and Ælfgifu and her son Swein went to Norway, there to rule for Cnut. This regency was not a success, but that wasn’t entirely Ælfgifu’s fault, as I explain in the book. When Cnut died, his two wives entered into the most fascinating propaganda war as they each championed the rights of their sons by him to succeed. (Incidentally, Emma’s English name was also Ælfgifu!)

Æthelflæd, Lady of the Mercians

The daughter of Alfred the Great and his Mercian wife, Ealhswith, she’s perhaps one of the better known Anglo-Saxon women of power. She’s almost unique in having led a kingdom, and that she did so in times of war is astonishing. Whilst she was initially sent to Mercia for an arranged marriage, she made a success of that marriage, and was elected leader after her husband’s death. She worked tirelessly with her brother Edward to push back the ‘Vikings’, but there is one small, often overlooked detail about her which to me is the most significant of all: after her death, the Mercians elected her daughter as leader. Her tenure didn’t last long, only six months or so, but the crucial point is that a woman leader was succeeded by a woman leader, something which didn’t happen again in England until Tudor times.

She was the daughter of King Oswiu of Northumbria and, like her predecessor and relative Hild – they were second cousins – was also a powerful abbess and politically influential too. She was an educated woman (a letter of hers survives) and she had close associations with St Cuthbert. When her half-brother became king he fell out with Bishop Wilfrid. The archbishop of Canterbury, seeking a reconciliation, wrote not only to the king, but to the abbess, too. When her half-brother died, there was a succession dispute and at the synod of the River Nidd, Ælfflæd’s testimony was of paramount importance. She testified, and an agreement was reached, with the archbishop giving his advice while ‘Abbess Ælfflæd gave them hers.’ She clearly had secular as well as religious power.

This lady was supposedly enslaved as a child, taken across the sea to Frankia and bought by the mayor of the palace of the Merovingian kings. She became his cup-bearer and he wished to marry her but she set her sights higher and married the king himself. (Her lowly origins are probably not true, even though it sounds romantic!) She served as regent for the eldest of her three children, and then retired to the monastery at Chelles, from where she kept a grip on secular affairs and had a hand in procuring a crown for her youngest son, too. From her preserved relics we know that she was about five feet tall and was buried wearing a cloak made of coloured silk. A plait of her hair, found among the clothing, showed that at one time she had been blonde, but that her hair had faded to grey.

Bertha was the daughter of a Frankish king, and she married Æthelberht of Kent, who was famously the first English king to convert to Christianity. Bertha is often cited as being an influence on her husband’s decision to convert, but what is also interesting about her is that Gregory of Tours, writing around or before 580, said that she was literate, and she corresponded with her family. Her daughter, Æthelburh, married the king of Northumbria and she, too, was credited with being hugely influential in the conversion process, receiving letters and personal gifts from the pope himself. Touchingly, we are told that she went by a nickname, Tate, a little detail which really helps bring her story to life.

Cynethryth was the wife of King Offa of Mercia in the eighth century. She attested charters, and was the only Anglo-Saxon queen (that we know of) to have coins minted in her own name. She seems to have acted as regent for her young son, and the monk and scholar, Alcuin, wrote to him reminding him that he should learn compassion from his mother and, tellingly, he asked that the king send greeting to her; he would have written to her himself but knew that the king’s business kept her too busy to read letters. (She was also accused of murder, but that’s a whole other story…) Her monastery at Cookham has recently been excavated, too late for me to include the findings in the book, sadly!

Literate, influential, regents, spin doctors, abbesses… an incredible variety of interesting women, and we even know personal details such as hair colour and nicknames. There’s over 100 such stories in the book, and I’ve enjoyed showcasing a few of them here.

Women of Power in Anglo-Saxon England is available from bookshops and Pen and Sword Books.