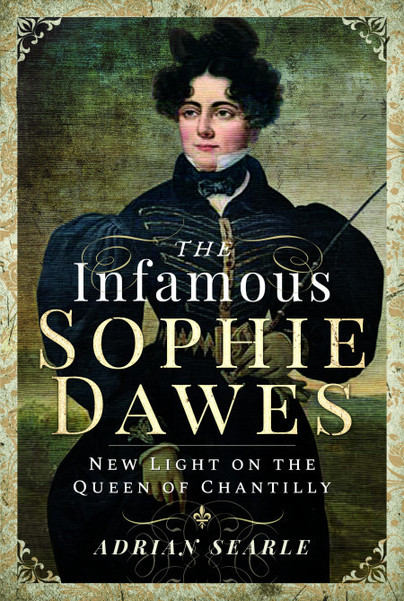 Ménage à trois? Nothing was ever too much for the infamous Sophie Dawes

But there was a twist!

Sophie, the young adventuress from the Isle of Wight, two years into her marriage with a highly-respected French military officer, was domiciled with him in the chateau home of a wealthy aristocrat publicly acknowledged as her father but in reality her lover!

There were certainly three in this intimate relationship even if one in the trio, the gallant husband, had known nothing of the true nature of intimacy between his wife and the high-ranking nobleman and one-time soldier he served loyally as aide-de-camp.

The setting was the chàteau of Chantilly which, in 1820 was recovering from the ravages of the French Revolution. It was the home of Louis Henri, Duke of Bourbon, Prince of Condé, a man closely related to the restored Bourbon monarchy of Louis XVIII.

Nothing in the life of Sophie Dawes, the daughter of an alcoholic smuggler, a child of the workhouse, was straightforward, conventional or conformist. Hers was a rage-to-riches story par excellence. It followed a truly extraordinary undulating course. Co-habitation in a French chàteau with her husband and an ageing lover who masqueraded as her father was little more than symptomatic of her path from abject poverty to fabulous wealth, influence, intrigue – and an infamy which persists to this day.

It is remarkable that her marriage to Adrien de Feuchères – whose elevation to the status of baron by the man he believed to be his father-in-law simultaneously conferred upon Sophie the splendid title of La Baronne de Feuchères – lasted a full four years before Adrien finally, and literally, thrashed the truth of her relationship with Louis Henri out of her. The scandalous affair had long since set the gossiping tongues wagging among the household at Chantilly and then throughout Parisian high society in general. The deluded husband seems to have been the last to know of it!

Probably, the revelation that the Prince of Condé was really her lover should have brought an abrupt and humiliating end to the smuggler’s daughter’s great French adventure. She had been his mistress, on and off, since he had been introduced to her in a London brothel during his long years of exile in royalist Britain from the turmoil of bloody revolution and imposition of the iron grip of Napoleonic control in France.

But Sophie Dawes put her sham marriage, a union embarked upon for ‘respectability’s sake,’ behind her. Initially banished from Chantilly and the French royal court, where she had glittered to deceive, she returned to the chàteau to rule it, and the ever more feeble prince himself, as the unofficial Queen of Chantilly. From this all-powerful position she would later enter into a convoluted intrigue with Louis Philippe, destined to become the last King of the French, to ensure that she shared with the monarch’s family the vast inheritance of the prince’s estate on his death in 1830.

The Prince of Condé, an arch opponent of the liberal-minded Louis Philippe, had been powerless to stop her – another pawn in Sophie’s high-risk game of chess. She had worn him down, forced him to make a will that suited her interests and those of the king. But did it go further than that? Did she play a, literally, active role in his death, officially passed off as a case of suicidal hanging but considered by many to have been one or murder? Was Sophie then responsible, soon afterwards, for the sudden deaths of members of her own family who simply knew too much of her scheming?

These questions are addressed by Adrian Searle in The Infamous Sophie Dawes, his latest book for Pen & Sword, as part of his reconstruction of the scarcely believable life story of the woman who scandalised post-revolutionary French society.

The Infamous Sophie Dawes in available to purchase in hardback and eBook edition now.