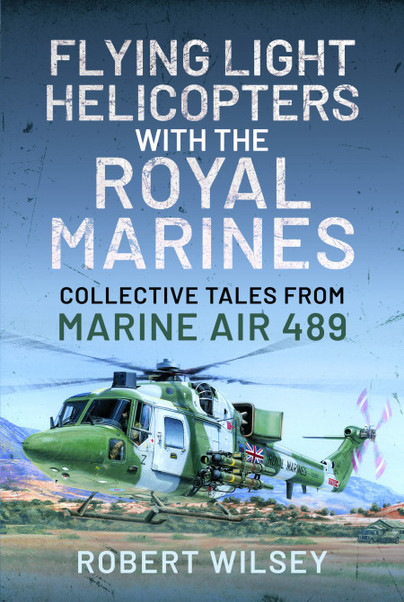 The story behind a painting – The 50th Anniversary of the formation of 3 Commando Brigade Air Squadron Royal Marines, 1968-1995

In writing any book the decision over which photographs to include is a hard one. There is one painting which I would like to have included in my recently published book ‘Flying Light Helicopters with the Royal Marines – Collective Tales from Marine Air 489’, but a small black and white photograph would not have done it justice.

In 2018 my talented artist friend, Anthony Lawrence GaVA, had just completed a painting entitled ‘Providing Safe Haven’ of a Royal Marines TOW-equipped Lynx Mk 7 at Sirsenk in Northern Iraq, a portion of which appears on the front dust cover of my book. We were discussing the upcoming 50th anniversary of 3 Commando Brigade Air Squadron formed in 1968 and the idea of a painting depicting the four aircraft types (Agusta-Westland Sioux, Westland Scout, Westland Gazelle and Westland Lynx) flown during the 27-year span of the Squadron’s existence.

Formed at RNAS Sembawang, Singapore, on the 12th August 1968, 3 Commando Brigade Air Squadron Royal Marines (3BAS) was initially equipped with 14 Westland Sioux AH.1 helicopters. In 1970 Westland Scout AH.1s replaced the Sioux in Brunei Flight for the anti-tank and utility roles and the Squadron returned home in 1971, the year of the British withdrawal from East of Suez, to join the 3 Sioux of Dieppe Flight supporting 40 Cdo RM at Coypool in Plymouth. Montfortebeek Flight remained detached at Arbroath until 1982 supporting 45 Cdo RM with Scouts, later replaced by Gazelles, whilst Salerno Flight was based in Malta supporting 41 Cdo RM (at that time the flights in the Squadron were named after the battle honours of the Commando unit that they were assigned to support). In 1974/75 the Sioux were replaced by 12 Westland Gazelle AH.1’s. Following the Falklands War the Scouts were replaced by six Westland Lynx AH.1 later to be upgraded to Lynx AH.1GT and finally Lynx AH.7. The Air Squadron was disbanded on 1st September 1995 and morphed into 847 Naval Air Squadron.  3 Cdo Bde Air Sqn RM saw service in a variety of theatres including Malaya, Aden, the Mediterranean, Belize, the West Indies, the Falkland Islands, Canada, South Eastern Turkey and Northern Iraq, Northern Ireland and Norway.

Anthony had suggested an aerial view of the four aircraft types flying in formation. I suggested Gibraltar as the location of the painting for a number of reasons. Gibraltar is a key battle honour of the Royal Marines and appears on our Regimental badge. In 1704 1,900 British and Dutch marines captured the fortress of Gibraltar from Spanish and French forces. Following the Treaty of Utrecht in 1713 Gibraltar was ceded to Britain and has been a key British naval base guarding the entrance to the Mediterranean ever since. In 1827 King George IV decreed that the Corps had taken part in so many battles that their battle honours would be ‘the great globe itself’ and that the sole representative battle honour ‘Gibraltar’ would appear below the Crown and Lion (signifying a Royal Regiment) on the Regimental Colour. It is thus a location which exemplifies amphibious warfare through the ages and has been a regular run-ashore for marines in amphibious task forces over the years when entering or departing the Mediterranean. All four aircraft types would have flown at various times over the Straits so the concept of the location was credible.

The four aircraft span a time frame of 27 years and there was no time at which the four aircraft could ever have formatted together (the Sioux for instance left RM service in 1975 and the Lynx AH.7 did not appear until 1990) so the painting would have to be imaginative. Given that assumption, it was a good opportunity to portray the individual aircraft in specific paint schemes appropriate to the year depicted. To the uninitiated, the aircraft went through a wide variety of camouflage and colour schemes over the decades. As an example ‘ROYAL MARINES’ appeared in white and later in black on fuel tanks and tail booms and also occasionally as ‘RM’. The official camouflage schemes varied over the years between dark green and earth, dark green and black and light grey and green. Aircraft tactical callsigns, such as ‘23A’, and later side letters, for example ‘L’ and ‘M’, appeared in white and black, on tail fins, noses or under cockpits and in different sizes and fonts over the years. During Operation HAVEN a large union flag decal was attached to the aircraft to aid recognition. So after studying photographs and records it was decided on the following four identities:

Since the aircraft were flying at sea, the doors on the Sioux, Scout and Gazelle were removed as was usual in the Mediterranean. As the Salerno Flight Gazelle was operating in 1977 flotation gear was not yet available and the Scout gear was optional, depending on payload. The Lynx is equipped with HF, which was exclusive to RM aircraft at that time, and the aerials are shown beneath the tailboom.

The formation layout required some detailed planning. If such a formation were to fly certain assumptions would have to be made. The airspeed would be about 70 knots which would be an economic cruise for the Sioux and a comfortable minimum power speed for the Lynx at the other end of the performance spectrum. The normal authorised separation for an echelon, vic and line astern formation sortie in the Squadron would be a minimum of two rotor spans which equates to about 25.6m separation between rotor tips in the case of the Lynx. Anthony’s first draft of the four aircraft in echelon starboard looked slightly wooden so we decided that the Sioux, as leader would have just called ‘break’ and would be at 3 seconds into a break to port with the number 2 Scout at one second into the break manoeuvre, with a slight nose-up pitch to prevent the nose dropping as the bank came on. Anthony decided to put the viewer of the painting about 30m abeam and slightly above the leader in the echelon formation. All this was drawn out in a series of diagrams on graph paper to obtain an approximately realistic separation.

The vessel transiting the Straits is appropriately the LPD HMS Fearless, L10, which together with HMS Intrepid, L11, alternated as the flagship for the Commander Amphibious Task Force and Commander Landing Force for UK amphibious operations. All the aircraft depicted would have operated from the LPDs at some stage in their service, but research showed that over the years a number of changes were made to her flight deck layout and markings. The markings shown in the painting are those of the mid-1980s and the Second World War-era Combined Operations badge (used by Commander UK Amphibious Forces) is shown on the outboard side of her funnels. A final check was made of the Admiralty charts of Gibraltar Bay to ensure that HMS Fearless would not be in danger of running aground on shoals off Europa Point and as a result a small change was made to her heading to keep her in deep water. In reality she would be accompanied by one or two Landing Ship Logistics (LSLs) and, in the 1970s, a commando carrier (HMS Bulwark or Hermes) with an oiler and some escorts but these are out of the field of view of this painting.

The 50th Anniversary of the formation of 3 Cdo Bde Air Sqn RM was celebrated in September 2018 at RNAS Yeovilton where this unfinished painting was first shown and the final painting was exhibited at the Annual Guild of Aviation Artists annual exhibition in Pall Mall in the summer of 2019, as described below, and is now owned by a private collector.

I hope that this brief article gives an insight into how much detailed background work goes into the skilled depiction of aircraft by talented aviation artists such as Anthony Lawrence.

Flying Light Helicopters with the Royal Marines is available here.