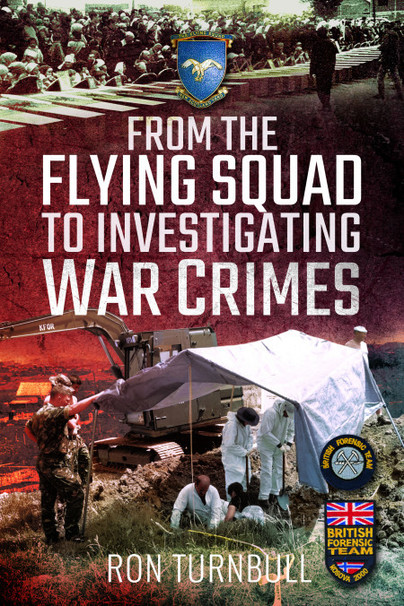 Since Pen & Sword kindly published my autobiography ‘From The Flying Squad To Investigating War Crimes’ in November 2019 I have been somewhat taken aback by the mostly very positive and complimentary remarks many readers have communicated to me plus the reviews I’ve received. Obviously some were old friends but others unknown to me. The process thus far has been humbling yet rewarding.

Pondering on this follow-up missive I suppose, like many others before me, that there are aspects of the original narrative that I would now consider altering, tweaking or simply remove.

During my professional progress in the police I witnessed, encountered and ultimately involved myself in dedication to our craft. In the early days I ‘thought out of the box’ by occasionally donning the garb of a coalminer when on night duty foot patrol in rural areas of Fife instead of ‘showing the uniform’ which was the instruction. This led to several arrests but a rebuke or two.

When I transferred to the Met and joined the CID the dedication of many of my peers and their ‘thinking out of the box’ became more obvious. Hours spent in cold, uncomfortable and unhygienic observation vans or sitting in a draft ridden church spire for lengthy periods keeping surveillance on a given target. A colleague taking a bit of a risk by gathering up the contents of a serious villain’s waste bin then methodically going through it to confirm evidence of that persons address only to uncover much more which eventually was used in court.

Perusal of local crime records revealed crime hotspots so we would use our initiative and maintain surveillance on these from various angles to affect arrests. This was collated at our level mostly without direction from senior officers. It’s what made detectives stand out from the average bobby who carried out their own fine work, but in other ways.

We adopted various disguises on occasions especially against pickpockets in the West End. A colleague dressed as a French, beret wearing tourist, another as a painter and decorator, football shirts and scarves were worn relative to whatever team was playing in London on the day. I donned Scottish garb on one occasion to replicate a homeless person and hid a sandwich wrapped in foil in a litter bin in a public park which I later rummaged through, found and ate during part of an ongoing surveillance operation, much to the chagrin of civilians using the park according to colleagues in an observation post covering my back.

We ‘went shopping’ with female colleagues pushing trolleys through a supermarket which we believed was about to be robbed at gunpoint, with a successful conclusion. On other occasions female surveillance officers pushed prams so as to look unobtrusive and blend in. All of these are examples of ‘going that extra mile’ and displaying loyalty, commitment and comradeship to each other, seldom found elsewhere, probably with the exception of the military.

Detectives are regularly portrayed in the media as going for the next rank or getting promotion for good arrests. Undeniably this will have a good effect should an officer wish to go down that road. However many of us, myself included, saw ambition as being as efficient and professional as you could be, whatever the task. Detailed fingertip searches conducted at crime scenes are another example. I would ‘walk the route’ to see if any evidence were dispersed off in a rush to escape but also to try and get into the mindset of the perpetrator.

Whilst searching the home of a burglar suspected of several murders in south London we spent several days methodically going through the property inch by tedious inch. I looked up and behind my head in a heating shaft in the flat and discovered several cheque books and credit cards taped to the interior. On examination they were identified as having come from one of the murdered victim’s addresses nearby. Furthermore his attempts at forging the signature were also amongst the papers. The sole of a training shoe recovered from this scene was photographed using a Polaroid camera and the instant photograph conveyed to colleagues at the other victim’s address, where they were also engaged in a meticulous search, was found to be identical to a mark discovered at the point of entry there. Teamwork at its finest, a lot more than simply doing the job.

The arduous and dangerous task of sifting through the bomb scene at the UNHQ building in Baghdad, Iraq in 2003 (which killed 22 UN staff) in the company of an extremely efficient and competent FBI counter terrorism unit is another example of the camaraderie, dedication and ambition to complete the task that knows no boundaries within law enforcement.

I find myself completing this article on ANZAC day when Australia and New Zealand honour their dead and missing from two world wars. It is with pride I recall standing with my Oz and Kiwi pals whilst operating in the Balkans, The Hague and in Sudan and sharing this respect and the ubiquitous barbeque afterwards.

From the Flying Squad to Investigating War Crimes is available here.