Since writing my book ‘Test Pilot’ and its publication in March 2022 I have been asked numerous questions about my test flying. I have listed just some of the questions I’ve been asked in recent days and the answers I’ve provided.

What has been my scariest flight test incident?

Again you would think this would be easy to answer. Surely, my most scary incident would be a recollection seared into my memory? Yes and no!

In my experience of such events, which is now becoming considerable, when bad things happen in flight I am usually totally absorbed with trying to sort out the problem, save my skin and save the aircraft. So in such situations that demand my full attention and immediate action my adrenalin has kicked in and my view of the world has dropped into a slow motion screenplay. I can see the aircraft, the various instruments and gauges, the controls I need to manipulate and my hands and feet moving ever so slowly to try and save the day. In such situations I have not had time to be scared – at the time. And there is again a difference, in my humble opinion, between those clear-cut situations that demand a pre-ordained response that any pilot would do without further thought and the other more challenging scenarios where decisions need to be made that could turn out to be wrong, perhaps leading to having made matters worse and perhaps of more concern – would not stand scrutiny by fellow aviation experts in the cold light of day with the benefit of 20:20 hindsight. In those situations the risk of potential professional embarrassment can cloud the required judgement to choose the ‘least worst’ option. Equally, for the test pilot, there will be required test points that need to be flown that might in themselves lead to an accident. And finally I have had a number of incidents which have scared me most when I reflect on my actions and mulled over the alternative outcomes had I made different decisions.

Some examples from my book ‘Test Pilot’ might illustrate the point: 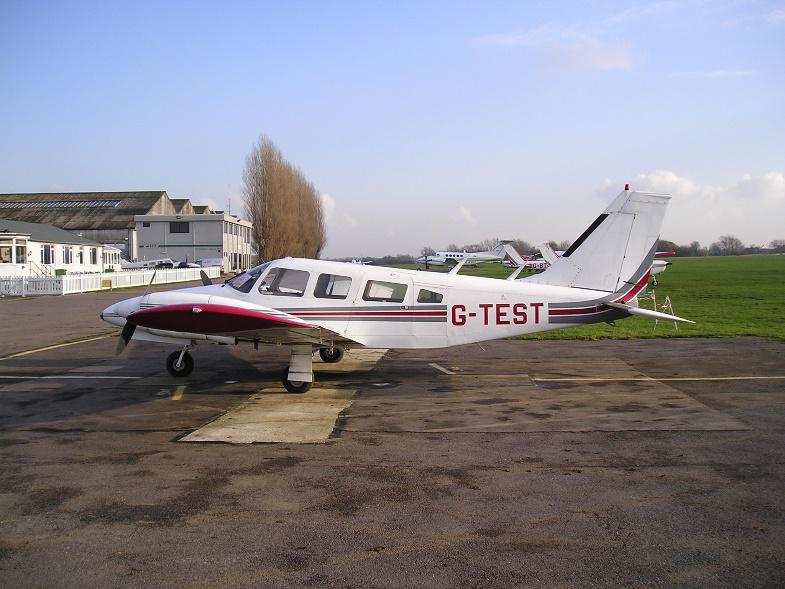 I was test flying a twin-engine Seneca from an airfield near London. The aircraft had been fitted with two recently overhauled engines. I needed to test the climb performance of the aircraft on each engine in turn which meant shutting the other engine down completely and feathering the propeller. The order I did this was irrelevant and I shut down the left hand engine and climbed on the right. After five minutes of data gathering I restarted the left hand engine and commenced the process of allowing it to warm up. Very quickly I identified a problem with this engine. I was not about to fall out of the sky as the right hand engine was running smoothly so this became an example of mostly ‘how to avoid embarrassment’ as my initial premise was that I had personally done something wrong, and almost certainly ground based engineers would find no fault if I flew it home successfully. So I started to try and diagnose the problem. Was it electrics? Magnetos? Icing? Fuel? I worked my way methodically through the possible causes of the problem without success and by now the engine was really running very rough indeed. If I didn’t shut it down immediately I would probably not be able to feather the propeller and the resulting drag would prevent me being able to continue to fly on one engine. With the engine feathered and an emergency call made to London Heathrow I was able to stagger home on one engine and land safely. On investigation the left hand engine had suffered from some serious mechanical problems and, thankfully, all my decisions had been absolutely correct. On reaching home I poured the first of many glasses of red wine and began to conduct my usual self-debrief. And this then became an example of being scared AFTER the event. What if I had flipped the coin differently and shut down the right hand engine? I would have been flying with full power applied to the defective engine which almost certainly would have failed, with minimal warning, leaving me in a very heavy twin-engine aeroplane looking for a field to make a forced landing into. The proximity of London’s controlled airspace meant I was testing the aircraft closer to the ground than I would have liked and the chances of conducting a safe forced landing pattern were at best ‘poor’. That thought was indeed very scary. I could have died in a twin engine aeroplane following a single engine failure. Not good. 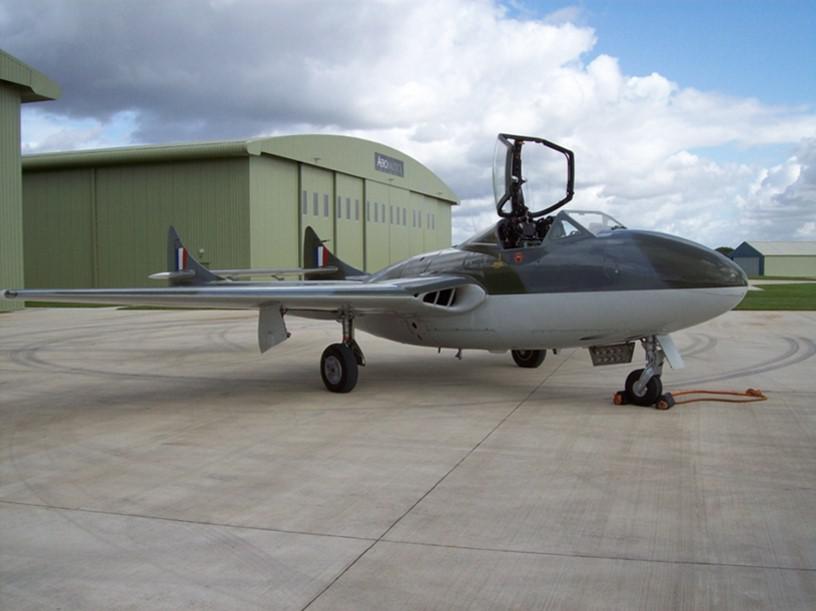 Scared during the event – Vampire Mk 55

An example of having time to get scared in the air came when I was test flying a Vampire Mk55 at Kemble airfield in the Cotswolds. This was a last minute requirement sprung on me without notice and I had ended up flying in the last forty minutes or so of airfield opening hours. Once airborne the undercarriage was reluctant to come fully up and needed to be cycled twice. The aircraft had not flown for many months and this was a typical gremlin, however on my return to the airfield at just before closing time I encountered a similar issue when I tried to lower the undercarriage, in that I failed to get the required three green lights indicating the gear was safely locked down. The aircraft’s ejection seats had been disabled so I was now working out the best way to save myself and the aircraft. The Vampire was designed during the Second World War and was built largely of wood. The cockpit was right at the front of the aircraft with no ‘crumple zone’ to speak of apart from a few pieces of plywood. My touch down speed, even if I manged to land at the stall was well over 100 mph. It was the right wheel that refused to indicate ‘down’ so I was already imagining the right wingtip digging-in and the aircraft cartwheeling with the chances of the occupants avoiding serious injury ‘poor’. So I had time to be scared. Really scared. And I had to time to consider the subsequent embarrassment caused by my decisions over the next few minutes being scrutinised. But in the end my options were limited. Kemble had one of the very best runways on which to land so there was no point in diverting. I couldn’t eject even if I had wanted to. I did hope that the gremlin encountered earlier was an indication issue rather than a genuine issue BUT that didn’t stop me doing the best I could with the cards I had been dealt. I had heard on the RT that a de Havilland Chipmunk aeroplane was long finals to the in-use runway. I quickly established communications directly and asked him to fly at ‘max chat’ along the runway. Without wasting further time I conducted an aggressive wing-over to join the aircraft above and behind with an overtaking speed of around 20 knots. This allowed the pilot of the low wing, clear canopy, Chipmunk to have a really good look at my wheels and undercarriage legs and doors. He gave me an optimistic report and I let him land well ahead of me. I chose to touch down a good third of the way into the airfield where the grass runoff on each side of the tarmac was greatest and where there were no masts and aerials and such like. I descended over the hedge into ground effect so I could slow the aircraft right down to its lowest possible flying speed and, by cross controlling, landed left wheel first, continuing to decelerate. It turns out my guardian angel was on good form that day (as always) and as the right hand wheel settled ever so gently onto the tarmac, with me braced for the accident, it didn’t happen. I breathed a sigh of relief and headed to the nearest pub without delay. 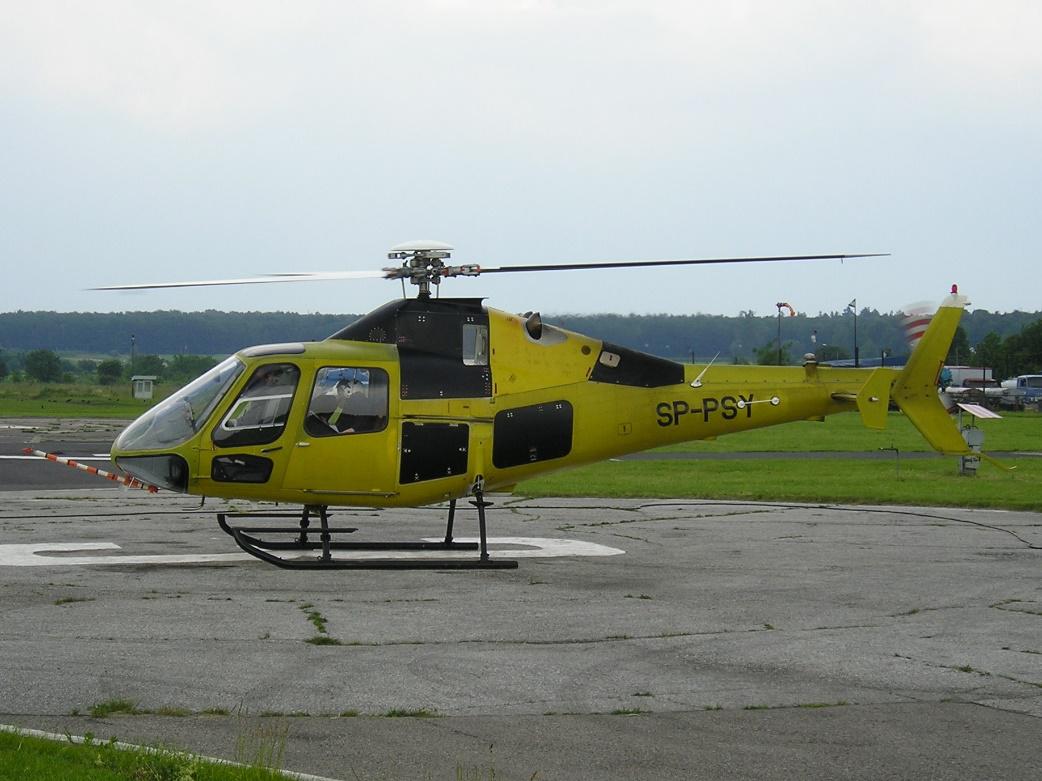 Scared before the event – PZL SW-4

The final example I should include is being scared before the event, entirely because of a risk of professional embarrassment, which arguably is ‘par for the course’ for test pilot. I had just become the regulator’s test pilot for the PZL SW4 helicopter and was flight testing it for the first time at Swidnik, near Lublin. The helicopter was ‘bloody difficult’ to fly for a whole host of reasons and the first day or two’s flying had been challenging. I now needed to test the aircraft’s capabilities to land safely following an engine failure. That is, I had to throttle the engine back to idle and carry out an engine-off landing onto the grass runways of the airfield. As all helicopter pilots will testify, this manoeuvre requires a certain amount of skill, practice and favourable conditions. The test conditions were very demanding and thus ideal for flight test, 30°C and no wind. Unfortunately this did not allow me to build up to flying these test points in an incremental and progressive fashion. I asked the company pilot to demonstrate a couple. The technique employed was far from optimum and the aircraft’s inherent poor handling qualities meant that my first attempt was going to be very demanding indeed. We sat on the ground as I advanced the throttle from the previous demo wondering whether I did indeed have the skill required, given the less than optimum conditions and no previous practice on the type. This moment must have faced all test pilots at some time or another in their career. The test point had to be flown. The aircraft had to be returned in one piece. And ideally my reputation and ‘street cred’ needed to remain intact. I was scared. But, after due consideration, I picked the helicopter up into the hover, flew the circuit, closed the throttle and, working my socks off, accomplished a reasonable first attempt. I was pleasantly surprised! I completed my test programme a few days later and one of the many unacceptable features I documented was the aircraft’s performance during engine-off landings – as suspected, they really were far too difficult.

I had been scared – and rightly so.

These incidents are described more fully in my book ‘Test Pilot’.