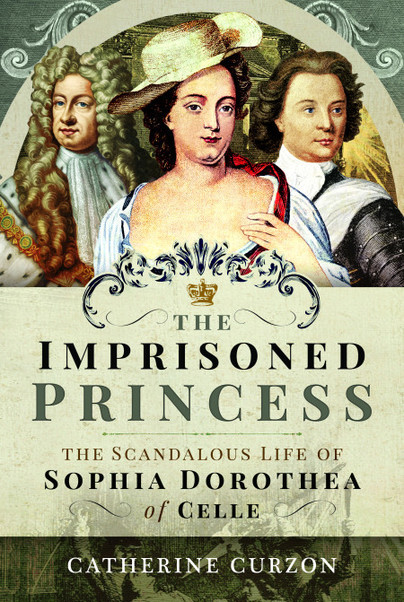 In the hothouse world of continental royalty, arranged marriages were old news. They weren’t always love matches, but few ended as badly as that of George I. By the time his divorce was finalised, a man was dead, a woman was ruined and the woman who was almost queen of England was destined for a three decade prison sentence.

When the future George I married his cousin, Sophia Dorothea of Celle, in 1682, it was the start of one of the most sour marriages history has ever seen. The bride and groom’s fathers were brothers and they arranged the marriage to secure territory, honour and the family fortune. From the off things were doomed and when Sophia Dorothea was told of the engagement she smashed George’s portrait against the wall and howled, “I will not marry the pig snout!”

She did, of course.

The marriage wasn’t warm, but it was just about civil and within five years, the couple had a son and daughter. George considered that job done and increasingly ignored his wife in favour of his mistresses. Sophia Dorothea was as bored as she was beautiful, so when a dashing Swedish war hero, Count Philip Christoph von Königsmarck, turned up in Hanover, the stage was set for disaster. Königsmarck and Sophia Dorothea had been childhood friends but this time friendship became something more and soon, the air between them was sizzling.

Königsmarck had an eye for the ladies and as he wooed Sophia Dorothea by day, by night he was busy bedding Clara, Countess von Platen, the ambitious mistress of George’s father. When Königsmarck tired of her in favour of the younger electoral princess, Clara swore revenge. She intercepted the love letters between the couple and easily figured out the code they used, revealing their declarations of love and Sophia Dorothea’s unhappiness in what had become a loveless marriage. The breakdown of the relationship between George and his wife became public knowledge when she confronted him about his affairs and he tried to strangle her, leaving her bruised and distraught.

The fate of the handsome war hero remains a mystery, but those courtiers in the know pointed the finger at Clara. Driven by jealous hatred, they said, she had enlisted a handful of ruthless courtiers to attack von Königsmarck. When he lay bleeding at her feet, said the gossips, Clara von Platen kicked her one-time lover in the head, dealing the death blow. As if to prove it, four courtiers left Hanover in a hurry, newly and mysteriously wealthy. Clara was saying nothing but the gossip drove a dagger through her influence at court.

As Hanoverian authorities searched for the missing count, Sophia Dorothea was imprisoned in her chambers. She was told that her fate would be decided by a combined jury of her father, husband and father-in-law. When they made their decision, it was merciless.

In December 1694 the marriage of George and Sophia Dorothea was dissolved on the grounds that she had abandoned her husband. With that, she was spirited away to the distant Ahlden House in Celle, where she was to remain to the end of her lonely days more than thirty years later. Her name was forbidden to be mentioned at court and her children were kept from her for the rest of her life. George II never forgave his father for tearing his mother from him and the feud between the two Georges seethed for years.

In fact, when he was still a boy George II fled Hanover for Celle, where he supposedly tried to swim across the moat at Ahlden to see his mother one last time. On the day after his father died and he came to throne as George II, his first act was to retrieve one of the forbidden paintings of Sophia Dorothea and hang it in his private quarters. Though George I might have tried to forget his wife, George II never forgot the mother he had so cruelly lost.

You can see all of Catherine’s books here.