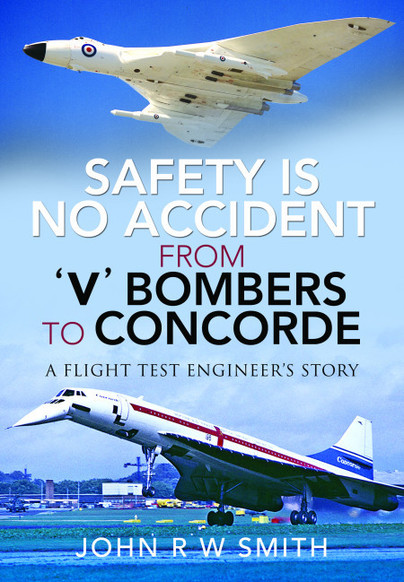 SAFETY IS NO ACCIDENT

FROM ‘V’ BOMBERS TO CONCORDE

Background to the Writing of this Book

Two things inspired me to write this book.

Firstly, the desire to share many aspects of an interesting and satisfying career and, secondly, and most importantly, the need to describe the part played by flight test engineers in the ultimate objective of test flying; ie ensuring the safety of the aircraft being tested. There are many fascinating books written by test pilots but few, if any, books have been written by the aeronautical engineers who work in a close partnership with the test pilots: the flight test observers and engineers. It was reading books about the life and experiences of test pilots, in particular Test Pilot: My Extraordinary Life in Flight by ex-Avro Chief Test Pilot Tony Blackman, which really spurred me on. The other book which I found inspiring was Vulcan 607 by Roland White which described the whole story of the successful bombing of Port Stanley’s runway by an Avro Vulcan, in the Falklands war. This book had a style I have tried to emulate, smoothly intermixing personal stories with the events.

The time frame of my book is the 1960s to 1980s; an era when advances in aviation, both civil and military, were progressing rapidly from the post war developments to the sophistication of the jet age. The variety of aircraft types being developed was astounding; it climaxed with the incredible achievement of Concorde. It was anticipated that the advanced understanding of aerodynamics and an increased professional approach to risk management would improve the safety of flight testing. This proved to be true, but it was never going to be a risk-free activity. During my career, I lost several close colleagues and friends in fatal flight test accidents. Two such events are documented in the book.

After obtaining an aeronautical engineering degree at Bristol University, the first period of my flight test career began with the aircraft manufacturer, A V Roe & Co (Avro), at Woodford in Cheshire. I worked as an aerodynamicist and, alongside this, I soon became a flight test observer. (The titles of flight test observer and flight test engineer are synonymous; ‘observer’ was an historic title whereas the change to ‘engineer’ reflected the technical aspect of the task). Here, I worked on the Vulcan bomber, the 748 twin-turbo-propeller civil airliner, the Nimrod maritime patrol aeroplane, modified Avro Shackletons and the Handley-Page Victor Tanker. In 1974, I left to join the Civil Aviation Authority (CAA) Flight Test Department in Redhill Surrey, under the leadership of their legendary Chief Test Pilot, Dave Davies. In this new and different approach to certification flight testing, my role turned to regulation, making flight test assessments of manufacturer’s prototypes and production aircraft, to check compliance with the CAA’s flight safety requirements. I flew with all the CAA test pilots and the scope ranged from single-engine light aircraft to large civil transport aircraft. It involved frequent visits to foreign manufacturers and included my participation in the CAA’s Concorde certification flight test programme.

That ‘safety’ was envisioned to be the thread flowing through the book is a clue in the title and, I hope it will be the main message which the reader will take from the stories.

A ‘story’ it was always intended to be, rather than a specialist treatise on flight testing. From the beginning, I wanted the book to appeal to anyone with an interest in aviation, not just like-minded engineers, pilots, and aviation enthusiasts but, particularly, the passenger flying public. To this end, I endeavoured to make it as interesting and reader friendly as possible by taking time to explain many of the technical aspects of the tests and giving some every-day examples of similar situations which, the reader could relate to.

Because it is my personal story, I felt that it would be incomplete if I did not include those excerpts from my childhood and education which were most pertinent to my enthusiasm for aircraft, engineering, and my ultimate career path. I have also included related stories of my other interests, motor cars and sailing, as well as examples of contemporary events and attitudes related to the 1960s to 1980s period.

The most difficult aspect when writing the book was verifying some details of events. My test flying logbook was invaluable for identifying dates and aircraft, but it gave only limited information on specific tests. I had to embark on some research to locate historic documents which would fill the gaps. For the period at Avro, all lines of enquiry proved fruitless. None of the relevant flight test reports from that time could be located and people who were involved during the company’s closure in 2011 could not find any trace of what happened to the documents. This is worrying as several of the aeroplane types were still recently operating and, in the event of a major accident, information within those documents could have been of significant relevance. I was obliged to rely on my memory which, in some cases, was corroborated by others but some key people from those times are no longer alive! Information from my period at the CAA was easier to locate, although I needed a lot of help retrieving reports and other relevant documents from the archives. A major problem for me in this respect was that CAA certification requirements (British Civil Airworthiness Requirements – BCAR) continuously evolved over the years and, I often needed to find a copy of a BCAR from a specific date which related to a specific problem that was uncovered during a flight test. Also, compared with my time at Avro, there were more people still with us who could corroborate events. Nevertheless, in some instances, I had only my memory to rely on. Memory, however, can be notoriously unreliable and, to my surprise, I was finding some cases where the corroboration I had unearthed, differed from my memory. I felt obliged to add the following disclaimer in the Prologue of the book: ‘There are several instances where I have not been able to thoroughly corroborate my recollections and I can only apologise for any errors.’

To make the book more interesting and ‘attractive’, I was determined to include as many relevant photographs as possible. From my time at the CAA, the majority of photographs I have included are from my own camera, as are a few of the earlier ones. At Avro, being largely a military manufacturer, private photography was forbidden, and I am indebted to George Jenks, the Chief Archivist at the Avro Heritage Museum who, on more than one occasion, diligently interrogated his photograph archives to find appropriate pictures for me to use in the book. The majority of the other pictures, which were needed to fill some gaps in my CAA flight test stories, came from the Air Britain website. Not only was I able to find photographs of the relevant aeroplane type, but often of the individual aeroplane used for our flight tests. These individual photographers were invariably enthusiastic about me using their work in the book and only asked that their name be referenced in the credits.

Towards the end of my flight test career in the 1980s, the role of the flight test engineer, in development and certification flight testing, was beginning to change. Advances in digital computing capability enabled real-time processing of data and, with the advent of telemetry (the radio transmission of data), this information could be transmitted to specialist engineers on the ground who were able to review it and quickly pass their conclusions and advice back to the flight crew. With this new technology, if there was an unusual flight test result, it was no longer necessary for the flight test engineer and test pilot, themselves, to make in-flight decisions on whether to continue or vary the test programme. Before the advent of telemetry, the flight test crew were very much on their own.