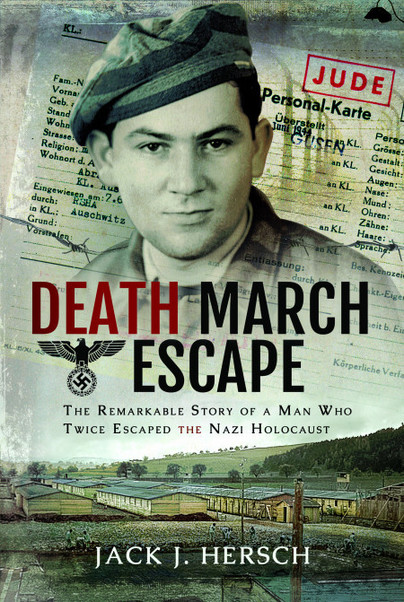 Today we have an exclusive interview with Pen and Sword author Jack Hersch. Jack’s book, Death March Escape is out now. Read on to discover more about the incredible true story behind the book.

1. What made you decide to write your father’s story?

I wrote it because of
how people reacted when they’d hear me tell the story. Every year,
my father would tell his story of survival and escape on the Jewish
holiday of Passover. It is a tradition at the Passover evening meal
to recount the story of the Jews leaving Egypt three thousand years
ago. My father would always digress during that telling to relate his
own story of escaping twice from the Nazis. So I knew the story well,
and often told it to others. But one of my tellings, in late 2015,
stood out from all the rest. For some reason I no longer recall, the
story came up during a business dinner. Afterwards, one man at my
table came up to me and said that he had never met a holocaust
survivor, he had never even met anyone related to a survivor, and had
never heard a story like the one I had just told. He said it changed
his perspective and outlook on life. Nothing, he said, would ever be
overwhelming to him again, because my father’s story put his own
life into perspective. I realized then, that there must be thousands,
and maybe even millions, of people who would be similarly impacted if
they knew my father’s story. And so that same day I decided to try
to write it.

2. Can you
describe the moment you found your father’s photograph on
the Mauthausen Memorial’s website?

My first reaction to
seeing my father’s picture on the Mauthausen Memorial website (the
site for Mauthausen Concentration Camp) was complete shock. First, I
had never seen this photo before. I have a few photos of my father
from his youth, taken before he’d been sent to concentration camp,
but not this one. Second, the picture was a crystal clear close-up –
a headshot – that showed my father’s 17-year old face with such
clarity, it seemed it had been taken a week ago. Third, in the photo
he looked nearly identical to my teenaged son. Besides shock, I felt
intensely curious, as the caption under the photo said my father had
been rescued from a death march by Barbara and Ignaz Friedmann, and
hidden until American forces liberated their town. How, I wondered,
did the concentration camp know about the Friedmanns? And, again, how
did they get that photo!?

3. What was your
next step (after finding the photograph)?

I clicked on the
“contact us” section in the Mauthausen website’s menu, and
wrote something to the effect of, “I’m his son. How did you get
this picture, and how do you know this story?” I also offered to
provide information about my father, starting with the fact that the
escape they wrote about was his second escape – he’d
escaped once before and been recaptured. That started a dialogue with
Mauthausen historians and eventually led to my visiting the
concentration camp.

4. What was your
research process like? You eventually flew over to Europe and the
concentration camp – what was your starting point and why?

I actually began my
research on the internet from my home in the US. Though it seems now
like an obvious step in the process, the idea of flying to Europe
hadn’t yet entered my mind. I can’t explain why that was: my
father nearly died in this concentration camp, he escaped twice from
death marches leading out of this camp, and yet I had no desire to
visit it. The drive to go there only came after research on the
internet, and email conversations with Mauthausen historians,
continually uncovered new facts about my father’s time in
concentration camp, until it became abundantly clear that not
visiting would be a gigantic mistake. My starting point for that trip
was Mauthausen Concentration Camp, in western Austria, which is now a
memorial and museum restored to its original dastardly condition. I
also visited the home of the Friedmanns, the people who rescued and
hid my father after his second escape, in Enns, Austria. They are no
longer alive, but the tenant there allowed me freedom to walk around.
And I walked parts of the death march route, in a successful attempt
to discover precisely where my father’s two escapes took place. I
chronicle all these visits in my book.

5. You were
already familiar with your father’s story; did you make any
further unexpected discoveries on your journey?

I
made many unexpected discoveries as I walked around the concentration
camp where he slaved, walked the death march route, and met with
historians and experts in their homes. I learned, for instance, that
one evening when SS soldiers at the concentration camp offered my
father and his group of prisoners all the soup they could eat, this
was not an example of humane treatment, as I’d always believed.
Rather, it was murder. The SS knew eating too much would kill a man
who’d been underfed for a year or more, and that my father and his
fellow prisoners would be unable to resist the offer of unlimited
soup. The SS hoped they would all eat too much and die. Somehow my
father knew the dangers of over-eating, and had only one extra
helping. But two-thirds of the 150 prisoners with him that evening
lacked my father’s self-control, and were dead by morning.

6. If you could
ask your father two questions today, what would they be?

My father went back to
visit Mauthausen in the late 1990s, and never told me. I learned
about that trip from my aunt, his sister. So first, I’d like to
have asked him why he never told me he’d returned to Mauthausen.
Second, I’d like to know what kept him going as he slaved day after
day, moving heavy granite rocks around the granite mine that was
attached to the concentration camp. I’d like to know what got him
out of bed, gave him the strength to work in the mine regardless of
the weather, enabled him to keep going all day in spite of being fed
next to nothing, and then do it again the next day. I never asked him
that. He never explained why – as he dwindled from 160lbs to 80lbs
and contracted tuberculosis, typhus and pneumonia – he didn’t
simply succumb to the pain and hunger, and allow himself to die.

7. Do you feel
you have completed your research, or is there yet more of the
story to uncover?

My research is
essentially complete. There are times in the book when I take
educated guesses based on facts, and I walk readers through my
thought process in the hope they will agree with my assessments. But
going from guess, to fact is probably never going to
happen, because my father is no longer alive to answer any questions,
and I’ve already met with as many people as possible to take
uncertainty out of my research. Yet I still hope that I might meet
someone one day who says, “I read you book, and my father told me
about…” and that story will turn a guess into a fact.
Beyond that, there’s not much more that I will be able to learn
about my father’s time in concentration camp, and his escapes, that
I didn’t tell the reader.

8. If you were to
describe your father in 5 words, what would they be?

I think the five best
words to describe my father are: strong, resilient, resourceful,
upbeat, gutsy.

9. Your father’s
story is truly remarkable, but which part of it stands out most for
you – which part inspires you the most?

This is a particularly
difficult question. So much of his story is incredible and inspiring
to me. But one part stands out. It’s when my father made the snap
decision to escape the first time. In that first escape, he was
heading west on a forced march, what we now call a death march.
There were around 1,000 Jews with him on that march, closely guarded
by SS storm troopers. Six miles after leaving Mauthausen they reached
a major intersection. My father and his fellow marchers were heading
west, while crossing directly in front of them, heading north, were
thousands of Austrian refugees fleeing the fighting. As my father
stepped into the junction, the SS guards stopped his fellow marchers
immediately behind him, so the refugees could go once my father
cleared the intersection. But the refugees couldn’t contain
themselves, and they plunged into the crossroads before my father
reached the far side. He suddenly realized he was caught up among the
Austrians. He now had a choice. He could march a few more feet and be
clear of the intersection and back with his fellow prisoners. Or he
could turn 90 degrees to the right and pretend to be part of the
refugee crowd. He must have realized the impossible odds against him
blending in with the refugees: he was wearing a concentration camp
uniform, he was emaciated, and he was exhausted. But he made the turn
anyway. He took two steps and spied a raincoat on the ground. He
quickly scooped it up and put it on. It fit well enough. And no one
said a word to him. Maybe no one noticed? Maybe people noticed but
were too caught up in their own attempts to survive to bother saying
anything? I truly don’t know. And it doesn’t matter: my father
made the instantaneous decision to turn with the flow of refugees,
and it worked. He was free, at least for a few minutes. When I
travelled to Austria and stood in the middle of that intersection
picturing myself as one of the Jewish death marchers, I was so
physically staggered by the sheer guts it took for my father to make
that turn, I couldn’t breathe. The motto of the British Army’s
SAS, the Special Air Services commando unit, is: Who Dares Wins.
My father dared, and won. I have no idea where he got the nerve to
make that turn. But he wanted to survive, and so he made the
turn, he took on that dare. That turn is, to me, the
single most inspiring thing my father did during the war.

10. You were
recently honoured with the Spirit of Anne Frank Human Writes Award.
How did that make you feel?:

I felt tremendously honoured. My father’s story, and stories of others who survived the barbarity of the Nazi regime, need to be told, retold, and told yet again. We – the human race – must be reminded of how terribly we can treat each other when we forget our basic humanity. I feel a deep pride that my book contributes to that effort of telling and reminding. If, in the end, one single person who reads my book veers away from bigotry and cruelty, the effort to tell my father’s story will have been worth it. And the award acknowledges that.

Death March Escape is available to order now from Pen and Sword.