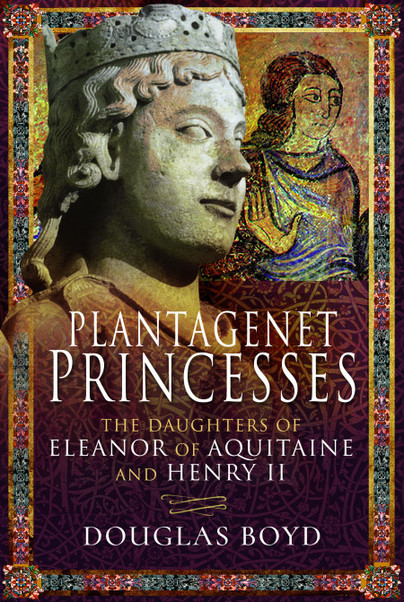 Have you spotted our new release Plantagenet Princesses by Douglas Boyd?

Here’s some background information to this new book. Enjoy!

The author prolific of April Queen – Eleanor of Aquitaine has lived and researched for forty years in the Plantagenet heartland of southwest France. In this history of Eleanor’s daughters and granddaughters and the royal girls who married into the Plantagenet family, he draws upon sources in many languages to paint a shattering picture of medieval princesses’ lives. Born in a palace, they might be. Dressed in silks and furs, they were. But they were also shamelessly traded for treaties to far older warrior kings when still in their early childhood.

Lonely in their new countries, of which they could not speak the languages, and labelled ‘that foreign girl’ they had to combat many enemies, both religious and lay, at the husband’s court. Some delivered their first child when so young that the birth damaged them for life, or killed them in agony. If they produced only daughters, this was held against them. Some were ‘returned to sender’ in disgrace for this reason alone because their ‘job’ was to provide an heir for the husband’s throne.

Matilda was married off to Henry the Lion of Saxony, who spent her dowry on a pointless trip to Jerusalem. Joanna was sent to Sicily, where her husband kept a harem of beautiful girls for his pleasure. After ‘rescue’ by her crusading brother Richard, he offered her as a present to Saladdin’s brother. Isabelle’s husband was gay. King John’s illegitimate daughter Joan was sent as wife to Llewelyn Fawr, prince of Gwynedd in north Wales, and served him as an able ambassadress with her father. But when she took an English lover, he hanged the man and locked her up for a year. Eleanor of Brittany was taken prisoner by her uncle John, who had murdered her brother. She died, still a prisoner, after 39 years’ confinement. King John’s daughter Isabella was invested with the title of Empress in Germany. It was a hollow honour: her husband also kept a harem and locked her away in a grim castle in southern Italy where she was not allowed to meet a visiting brother returning from crusade.

Yet, some princesses handled their situations brilliantly. Of the four daughters of the count of Provence, one married the English king, another the French king, and the others married those kings’ brothers. And the first two young women brought their husbands together, to stop a war. Then, there was Blanca of Castile, who grew into a politically astute and tough queen, and dowager queen, outwitting her enemies and ruling France when husband, and later her son, departed on crusade.

This fascinating account of 16 princesses’ experiences scales the heights and plumbs the depths of medieval women’s lives.