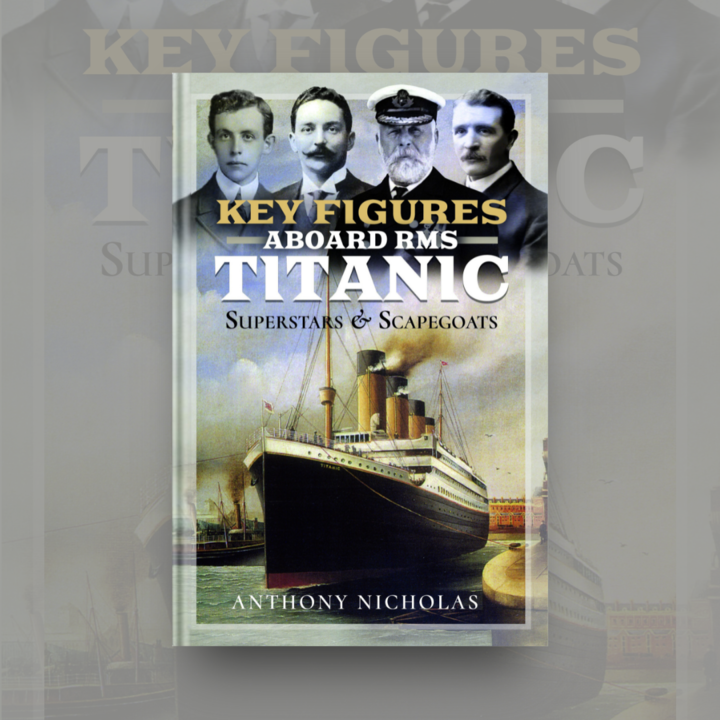 A sea as still as a millpond. A night as cold as a banshee’s breath. A sky studded with literally millions of shimmering stars.

Stage right, a ship comes gliding into view. From on board, strains of ‘The Blue Danube’ float out across the starlit ocean. Row upon row of her deck lights shimmer on the water below.

Four towering, black and yellow funnels loom against the starlight like the pillars of some gigantic temple. The only other sound is the occasional popping of champagne corks, and sudden, swelling bursts of laughter from random groups of passengers.

Up ahead, a silent, salt water assassin awaits. Partially submerged, wholly intent. Patient as a crocodile, it anticipates its onrushing prey.

These last, living images of the Titanic are only part of the reason why her story continues to awe, amaze and appall in the same instant. She has become the Marilyn Monroe of ocean liners; a sleek, sultry beauty, taken out way before her time.

Her story has become one of ‘the’ landmark events that define the twentieth century. A saga every bit as seismic, as stupefying, as the assassinations of JFK and Martin Luther King, or the death of James Dean. In the doomed icon stakes, Titanic is every inch the equal of any of them.

The combined talents of Hans Christian Andersen, Steven King, Gene Roddenberry and Jules Verne could never have concocted anything so hideously improbable, as horribly intoxicating, as what actually unfolded on the North Atlantic on the night of April 14-15, 1912.

The Titanic has evolved into some kind of twenty-first century Flying Dutchman, with interiors by Cesar Ritz. Fuelled by a subtle mixture of horror, fascination and sheer, fatal glamour, she charges heedlessly across the sea of our subconscious, trying to attain the waters of a port that she can never reach.

The loss of this unthinkable, state of the art Edwardian superliner erupted like a hydrogen bomb. In 1912, the British Empire covered a full quarter of the globe. It’s fleets-merchant and naval alike-dominated the waves.

This was what Mark Twain famously derided as the ‘Gilded Age’ in print. An era in which it seemed that the application of boundless wealth to tremendous bounds in technology could accomplish anything.

Now, the ultimate manifestation of that flawed mindset had gone under as if she were nothing more than some humble tramp steamer. With her went a whole raft of illustrious, world- renowned luminaries and multi- millionaires.

The shock was fully equal to 9/11, the death of Princess Diana and the Concorde crash, all happening at the same moment. From top to bottom, the layer cake of contemporary society was shaken as if by an earthquake.

And yet, the story of the Titanic is far more about people than anything else. People who conceived, created, dreamed and, ultimately, doomed her. People who would, in many cases, die with her, too.

One by one, over the course of seventeen chapters, we meet many of the key figures. Among them, a besotted chief architect, for whom Titanic was akin to some adored, surrogate child, takes centre stage.

We meet a supremely complacent captain, one as venerated as any rock star, who simply disintegrates under the awful weight of the catastrophe that overwhelms his command. In the last, desperate hours, he will wander around like Banquo’s ghost.

One by one, a quartet of desperately embattled deck officers take centre stage. We see how their past, personal lives, and their years of roller coaster experiences at sea, dictate their actions on board the sagging Titanic as she slips into the strangler’s grip of the ocean.

The Chairman of the White Star Line merits a full chapter. More vilified than Genghis Khan, as derided as Dick Dastardly, but was he a simple, convenient scapegoat? This story is possibly the most contentious of that night.

Next up, we have two men in a wireless room. Already massively overworked and stressed before the accident, they are the only hope of summoning any kind of rescue. Their story unfolds in a small, white pressure cooker of a room. Everything depends on them. No one will be saved without them.

Of course, there was music. Over two, separate chapters, we first meet bandmaster Wallace Hartley, and then his ‘Magnificent Seven’ fellow musicians. As rockets go up and lifeboats go down, they create their own posthumous, immortal soundtrack, flooding the night air with a kind of numbing, musical chloroform.

Who were they? What were their backgrounds? And what did they actually play, as opposed to what myth and lore informs us?

And there are others, too. Groups of men and women. Mostly, they suffered, toiled and died out of sight, alone and far from home. Here, their stories resurface, too.

Come and meet the able seamen actually lowering the lifeboats. The boiler room men, fighting to dampen the fires, and the engineers, fighting way below decks in a desperate attempt to buy time for the ship and her people.

Meet the lift operators, the postal clerks, the third class stewards, and the lady stewardesses, too. Their stories come back to light here, too.

This is not Jack and Rose; these were real, living people. They were not supermen. They had families, fears and flaws. Men placed in an unthinkably awful situation; one fully the equivalent of a modern day Alamo, or even Sparta.

Many rose above their limitations, and worked selflessly to save others. Some crumpled under the awful pressure like the hull plates of the Titanic herself.

All of them were working in real time, in a desperate situation that spiralled ever downwards with each new minute.

Here they stand, centre stage, as the key figures. The brilliantly lit, sagging, bulk of the Titanic becomes their stage, the backdrop to a series of intensely human melodramas, combining like some kind of smouldering powder trail that triggers a ghastly, cataclysmic endgame.

Yes, this is still Titanic. But not as you have ever experienced her before.