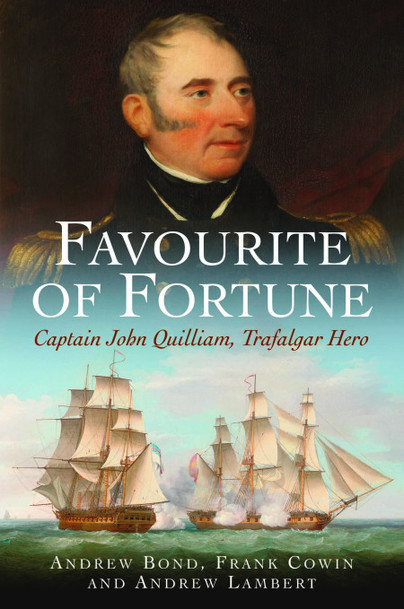 On 1 August 1803, Lieutenant John Quilliam, then fifth lieutenant of Vice-Admiral Lord Nelson’s flagship Victory, recorded in his own lieutenant’s log that ‘left the ship Lieut Robert Pettit being appointed to command HM Sloop Termagent’. Pettit’s promotion not only triggered the next advance in Quilliam’s already remarkable career but also indirectly ignited in a fellow officer a grudge which was still borne against him long after his own death 26 years later.

Less than a year earlier it had looked as if Quilliam’s active naval career was over. The Treaty of Amiens, bringing to a close 10 years of war with revolutionary France, had been signed in March 1802. Five months later, on August 4th, HMS Amazon, the frigate of which he was first lieutenant and in which Nelson had flown his flag for two months in late 1801, had been paid off at Greenhithe. Amazon was to be re-commissioned after a brief refit and her captain and officers reappointed. However peace time duty held little attraction after 10 years of continuous wartime service and Quilliam had applied to go on half-pay. Despite prompting the dusty response from the Admiralty that ‘their Lordships will not be disposed to give Lieut. Quilliam any employment in future until every Lieut. desirous of employment has been provided for’, within days he was on his way home to the Isle of Man.

In the event, the treaty signed in Amiens had begun to unravel before the ink was dry and on 22 March 1803 Nelson was named commander-in-chief in the Mediterranean. His top team would comprise George Murray as Captain of the Fleet, in effect chief of staff, and Thomas Masterman Hardy as his Flag Captain, that is captain of his flagship. However neither Murray nor Hardy was immediately available so Nelson turned to Sam Sutton, the former captain of Amazon, to ‘fit out the Victory for us, which I am very glad of as she will be well fitted’. Both Sutton and Nelson would have been well aware of Quilliam’s unique capabilities in fitting out and in repairing battle and storm damage, based on his early years in the dockyard at Portsmouth. Thus it is no surprise to find his name among 10 lieutenants appointed to Victory.

Five of them, including Quilliam, joined the 100-gun battleship at Chatham on 9 April 1803 when Lieutenant Pettit, the most senior, put the ship into commission. Two days later Captain Sutton arrived and took command. There followed five weeks of intense activity as Victory, fresh from a five year ‘great repair’, was transformed from a floating hulk to a fully rigged, fully armed and fully provisioned man of war which, on 16 May, anchored at Spithead. Rather surprisingly, her allocation to Nelson’s command had not yet been finalised and it was in Amphion that he and his suite made their way to the Mediterranean while Sutton followed in Victory once her status had been resolved.

Victory’s muster table makes clear that Captain Sutton assigned each of his eight lieutenants their positions and responsibilities in strict accordance with their seniority. Thus after Pettit, Pasco became second lieutenant, Yule third, King fourth and Quilliam only fifth, with the remaining three, Lackey, Layman and Bligh, respectively sixth, seventh and eighth. That order of precedence was still in place on Saturday 30 July when, some 30 miles south of Toulon, Victory joined the fleet.

Amphion had made a much faster passage, giving Nelson ample time to assess both the state of his new command and its strategic position before his flagship’s arrival. Fulfilling his primary objective of keeping watch on the French fleet in Toulon and, if possible, bringing it to battle necessitated keeping his ships continuously at sea without dockyard support. Gibraltar lacked the facilities to maintain ships of the line; as for the only other British base in the Mediterranean, Malta, ‘… when I am forced to send a Ship there, I never see her under two months.’

Officers who could keep battleships maintained and able to go into action in all weathers and for months on end were at a premium. Just two days after Victory’s arrival, and after Hardy and Sutton had changed places, the former becoming captain of Victory, the latter of Amphion, Nelson was able to create a vacancy. Having appointed Lieutenant Pettit to Termagent, he appointed Quilliam first lieutenant, the post he would hold for the next 26 months throughout the long watch on Toulon, the subsequent chase first to Alexandria and then to the West Indies and the final confrontation with the combined French and Spanish fleet off Cadiz. Suggestions that Quilliam owed his preferment to an idiosyncratic penchant of Nelson’s for appointing the most junior candidate as first lieutenant can be safely discounted. Quite simply, he had picked the most able and experienced candidate.

Despite Nelson’s own satisfaction with an appointment which was to be justified many times over in the succeeding months, not everyone was prepared to accept it. Most notably, Lieutenant Pasco, who 12 days later was made Nelson’s signal lieutenant when the incumbent, Lieutenant Pearce, was promoted to command the brig sloop Halcyon, never abandoned his belief in his own right to the position on seniority. According to his own account he was only prevented from petitioning Nelson to reinstate him hours before the final engagement by his reluctance to disturb the Admiral at his prayers. That respect for his chief was, in Pasco’s view, the sole reason why he was only promoted Commander after the battle while Quilliam, whom he blamed entirely, was made Post-Captain.

No amount of subsequent honours, which included a major role at Nelson’s funeral, nor the fame of having been the author of his chief’s most famous signal, were able to assuage the resentment Pasco bore against his perceived rival. Made Post-Captain himself in 1812, he went on eventually to command Victory in Portsmouth in 1846 and, still bearing his grudge against Quilliam, died an Admiral a full 24 years after his bète-noire.

Favourite of Fortune is available to order here.