THE GERMAN WAY OF WAR. A LESSON IN TACTICAL MANAGEMENT: MEN AND TEAMS

The German Army lost two consecutive wars and the conclusion is often drawn that it simply wasn’t able to cope with its opponents. This image is constantly reinforced in literature and in the media, where seemingly brainless operating German units led by fanatical officers predominate. Nothing was as far from the truth. The records show that the Germans consistently outfought the far more numerous Allied armies that eventually defeated them: their relative battlefield performance was at least 1.5 and in most cases 3 times as high as that of its opponents. The central question in this book is why the German Army had a so much higher relative battlefield performance than the opposition. A central element within the Prussian/German Army is Auftragstaktik, a tactical management concept that dates from the middle of the nineteenth century and is still very advanced in terms of management and organization. In this series of blogs we will have a closer look at the key elements of Auftragstaktik and cases that will illustrate the effects of these elements in the reality of the battlefield. In this part of the series we focus on men and teams.

The Germans were aware at an early stage of the importance of psychology as a science to get the right man in the right place, to strengthen morale and to harden the troops for the tension and stress of modern technological warfare. That, of course, is not miracle, Germany being the cradle of modern psychology. The First World War, in which units were quickly disbanded, had shown that a new type of soldier was needed, no longer someone who functioned under the all-seeing eye of his officer, but someone who could operate independently in the no man’s land of the front. The efforts in the field of psychology focused on creating this new type of independently thinking soldiers. In addition, it was realized that the psychological aspects of new weapons such as tanks and aircraft demanded more than just knowledge and skills, but also imposed demands on the personal qualities and competences of the troops.

The drill, seen in other countries as one of the most important instruments for discipline, was disbanded long before the First World War. The Germans acknowledged that this way of training troops did not fit with their views on modern warfare.

Auftragstaktik as a command concept offered clear training objectives for all army units throughout the country, the training programs were extremely realistic and primarily aimed at developing the capacities of the individual soldier, and then those of larger units. The training courses fell on fertile soil due to the high level of education of the recruits

The core concept of the German army in the field of men and teams was the socialization of a group
of people into a team, the Einheit, a central element within the German army. In addition, there was
a constant focus on strengthening the agility and resilience of the unit thus created. The Germans expect three things from their teams and their responsible officers/NCO’s:

Much emphasis was placed on the professionalism of the individual and the team. Everything within the German training and personnel planning system – from the recruitment and selection of troops within a well-defined geographical area (Wehrkreis), the division rotation system to the reception of rehabilitated troops within their own units – was aimed at achieving and maintaining a large degree of social cohesion in the breadth and depth of the organization.  Social cohesion in the military context meant that everyone in a unit knew each other well and had experienced each other in combat situations. It was assumed that this cohesion ensured that the units functioned more smoothly, stayed better together in combat situations and disintegrated less fast.

In addition, the units in the German army had a remarkably democratic character. In the context of Auftragstaktik, the emphasis was on jointly reaching goals as a team and thus on horizontal communication.

Relations between officers/NCO’s and their men were not be based on power, but on mutual respect and authority. As a result of this, from the beginning of his training the officer was urged to win the confidence of the unit that was entrusted to him without jeopardizing his authority.

Special attention should be paid to the rotation system. Once the division was in active field service, a training battalion remained stationed at the home base as part of the Ersatzheer. This training battalion – Ersatz Bataillon – was responsible for training and delivering troops to the division at the front. There was a rotation system in which officers/nco’s with combat experience (often officers who were rehabilitating after an injury) were deployed for the ‘mother’ units of the Ersatzheer at the home base. The importance of this should not be underestimated and this system ensured that the recruits:

This method prevented that recruits were trained by officers who had behind on the home front and
were alienated from the active combat service, it prevented that two parallel worlds arose.

After their training, the troops travelled with their officers as a group to the front. This meant that
they could support each other during this exciting period. In addition, they formed in this way de
facto an integrated fighting force that could be useful in the Soviet Union if their trains was attacked
by partisans. To ensure a smooth transition between theory and practice, each division of the Feldheer had a so called Feldersatz Bataillon. This provided additional training and acclimatization of the newly arrived men and officers during battle breaks at the front. In addition, the newly arrived troops were taught the intricacies of the specific part of the front to prevent the ‘green horns’ from getting killed during the first days at the front.

All these efforts made German units psychologically very resilient: while 25% of the Allied troops in Normandy had signs of battle fatigue, these kinds of problems were unknown on the German side; severe psychological problems amongst American troops amounted around 8%, but were as good as non-existent amongst German troops. And under pressure units tended to unite, stand and fight together, instead of disintegrate and everyone fighting his own war. 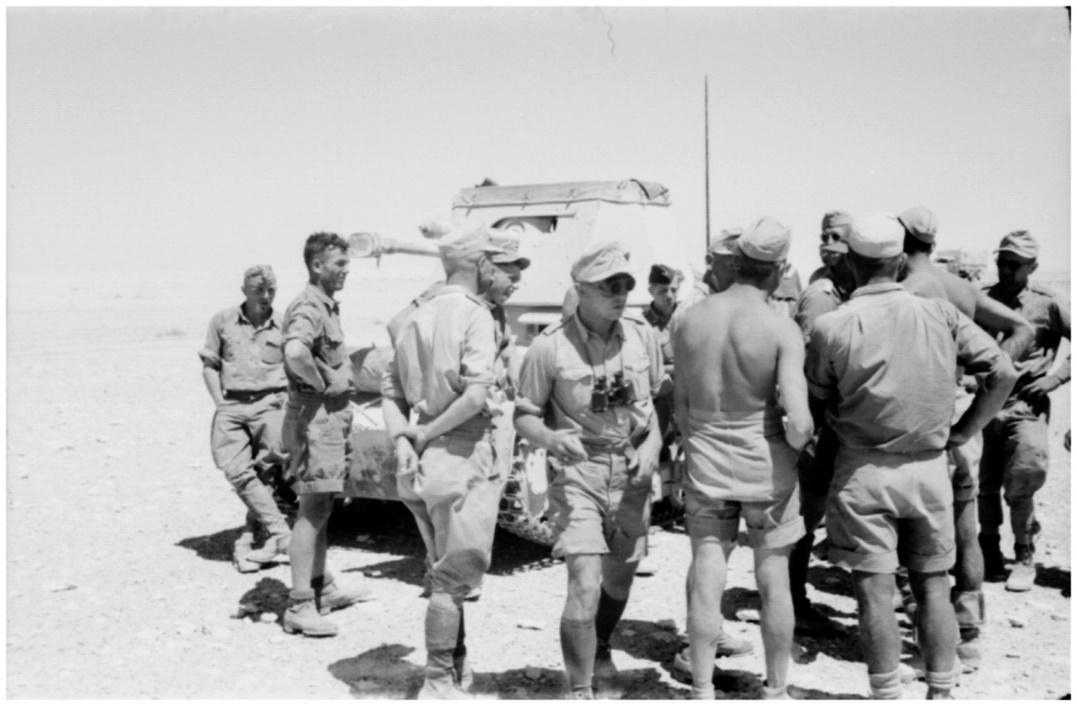 The officers and men of Kampfgruppe Stephan discuss new goals during Operation Crusader in November 1942. While the Allies struggled to follow plans exactly, the Germans needed only short breaks to set new goals and coordinate activities. They were therefore, in popular management language, particularly ‘agile’. (Klein Collection)