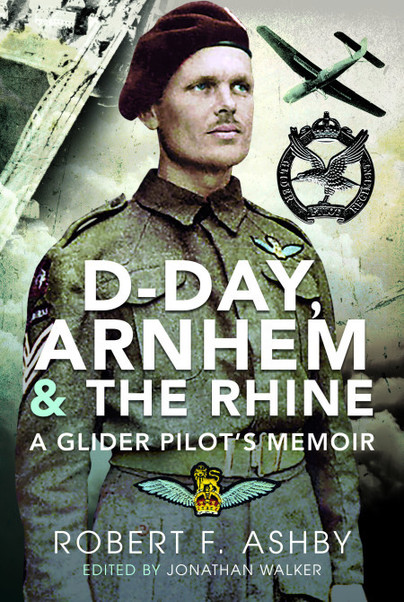 A chance meeting between two guides at Exeter Cathedral, has led to the publication of a remarkable WW2 memoir. Military historian Jonathan Walker and retired solicitor, Mike Ashby put aside their interest in ecclesiastical history and delved into the story of Mike’s father Robert Ashby, who had served as a glider pilot. Robert had recently died, aged 103 years, and left a fascinating and dramatic memoir of flying gliders into the battlefields around the Normandy beaches, at Arnhem and at the Crossing of the Rhine at the end of the war.

Flying wartime gliders was a lethal business and it took nerves of steel to dive down into combat, carrying behind you a unit of twenty-eight men or, surprisingly, heavy machines, guns and even tanks. It took great skill for a pilot to navigate the detritus of a combat zone – avoiding gliders already on the ground, as well as stray paratroopers who had landed in the target area. Then there were numerous potential hazards such as wandering farm animals, ditches, ponds or fences that sliced through the wooden and canvas gliders like cheese wire. On top of those risks, came enemy fire. Flak from German 88mm guns as you glided down, followed by artillery and small arms fire on the ground, accounted for many pilots. Small wonder then that the Glider Pilot Regiment sometimes suffered 50% casualties on military operations.

Jonathan realised that Robert Ashby’s memoir was a most unusual record, for not only does it detail the gliders’ role in three major operations of the Second World War, but it shows the human side of war – what these pilots actually felt, before and during combat. And Ashby was not shy of sometimes criticising the conduct of his fellow soldiers as well as senior commanders, with Arnhem particularly coming under the spotlight. Under Jonathan’s editorship, this memoir is packed with acute observations that will make for a compulsive read.

D-Day, Arnhem and the Rhine is available to order here.