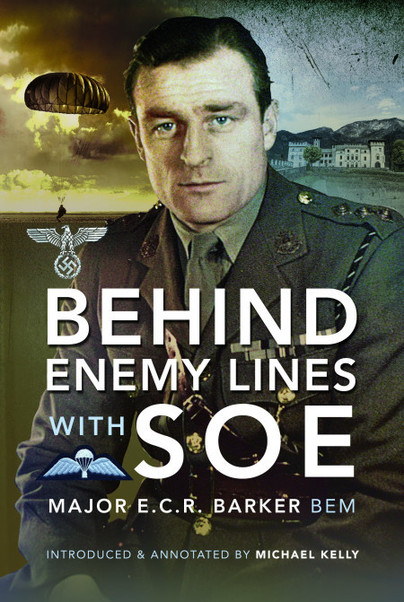 Behind Enemy Lines With SOE

Life is full of chance encounters. Most people can look back on their lives and identify an occurrence which led to success, rapturous happiness, promotion and sometimes failure. This encounter has produced one of the many happy incidents in my life.

A few years ago, I guided a family from Queensland, Australia over the WW1 Battlefields in France & Belgium. We kept in contact and three years ago they told me of their friend who lived in Cambridgeshire and whose father had been in Special Operations Executive [SOE]. The son had kept a manuscript his father had written regarding his experiences in Northern Italy in 1944. Major Ernest Charles Roland Barker BEM had intended publishing his memoirs but before he could do so, he was killed in an air accident in 1952.

I met Charlie Barker in 2019 giving me the manuscript, he told me he had tried to get his father’s account published but there was little or no interest shown. It seemed the account would lay forever in the cardboard box. Charlie gave me some old photographs of his father and I returned home to study them.

I distinctly remember opening the large cardboard box to discover almost 300 pages of typewritten narrative on yellowing paper, held together with rusting paper clips. I was soon to realise that Barker had written a harrowing story of great bravery in enemy territory, his subsequent capture, his torture by the Gestapo and finally, an enterprising escape from a prison camp. In addition, it was a wonderfully descriptive account of the villages, his passages across the Dolomite mountains, the local people, and the area around the Italian border with Austria containing sufficient detail to be able to follow in his footsteps now, eighty years on.

At long last, Major Barker BEM, who at the time of his death was commanding 22nd Regiment SAS in Malaya, will have his story told. I feel honoured to be part of the medium conveying the account to his family and to the world.

Behind Enemy Lines with the SOE is available to order here.