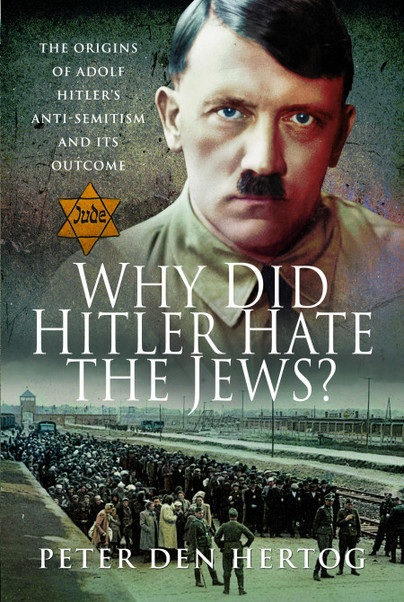 Another look at Hitler’s early biography

Adolf Hitler only became an anti-Semite in the summer of 1919. It had taken a long time: he was already 30 years old. One can describe his anti-Semitic conversion as a process in which Hitler expressed his paranoia into anti-Semitism. He embraced it with his heart and soul and he would never let it go. Since then, he developed his overall anti-Semitic world view from deeply embedded paranoid tendencies.

In 99% of the biographies of Hitler, only external anti-Semitic influences are mentioned as an explanation for Hitler’s anti-Semitic turnaround – not his powerful paranoia from within. And the latter, which coincided entirely with all his anti-Semitic thoughts, is the real explanation for his rabid hatred of Jews. There are Hitler researchers who consider him paranoid. But you don’t hear them say a word about the causes. Why? The causes were simply not known. It is to the credit of the highly respected Daniel Freeman and his research group that they recently brought the general causes of paranoia clearly into view. And what turns out to be if one looks at Hitler? They were all effective in his early life. In my book ‘Why Did Hitler Hate The Jews’ I work it out extensively. Here I can only give a few examples. As for the general causes I quote Freeman and his colleagues. It’s in quotation marks (for the source references, see my book). For the sake of clarity Freeman and his researchers have not dedicated a word to Hitler.

In September 1907, Hitler went to Vienna to apply to the Academy of Fine Arts. The examination took place in October. He thought he was an artistic genius and that kept sticking in his brain until the end. But he failed the entrance exam. The rejection was a major blow to him: it was the last thing he had expected. It was a trauma and “People who experience trauma are at greater risk of paranoia”. This is particularly so, if several traumas are experienced in life, which is definitely true in Hitler’s case. The future had many more shocking experiences in store for him.

Hitler quickly returned to Linz. His mother Klara Hitler suffered from breast cancer and her condition deteriorated. Once home the 18-year-old Hitler took care of her with great devotion. In spite of that, she died on 21 December 1907. Dr Bloch, the Jewish family doctor, said, ‘during my 40 years as a physician, I have never seen a young man, so grief-stricken and full of suffering, as the young Adolf Hitler.’ There is no doubt that his mother’s illness and death was a traumatic event for the young Hitler, which may have led to him becoming prone to paranoia, as he was also rejected by the Academy in the same period. However, for the actual development of pernicious distrust, he would have to experience even more severely negative experiences.

After the death of his mother, the young Hitler kept repeating that he wanted to become a great artist. A neighbour of the Hitler family, Magdalena Hanisch, could do something for him. She succeeded in ensuring that professor Roller would help Hitler. Roller was an influential man in Vienna especially in the artistic field. On 8 February 1908, he wrote that Hitler could visit him in his office in the opera building. He should bring some of his work with him, so that the professor could assess his artistic abilities. In Vienna, Hitler indeed went straight to the opera house with Roller’s letter in his pocket. When he approached the building, he lost courage and turned back. After an inner battle, he overcame his shyness and went to the opera for the second time, now he made into the stairwell – but no further. A third attempt failed as well. Then someone asked him what he was doing there, which made him feel even less comfortable. Hitler went out again. To get rid of this constant tension he destroyed the letter. He left the chance that Professor Roller would discover him as an artist unused. He did not make use of the opportunity to be admitted at the Academy of Arts – his greatest wish – through the intercession of Roller either. Apparently, a negative self-image had a more powerful effect than the courage to take an actual, decisive step towards his greatest desire. “People with low self-esteem and feelings of inferiority to other people can become susceptible to paranoia.” And he must have been anxious too and “the most common emotional trigger for feelings of paranoia is anxiety.”

In 1908 his friend Kubizek from Linz came to live with him in Vienna. They lived in poor 31 Stumper Gasse. Here in Vienna Hitler gained a lot of knowledge about anti-Semitism: all evil in the world came from the Jews, they caused wars and revolutions, undermined other peoples and they themselves pursued the world domination. They were an intensely dangerous people. It is striking that these accusations didn’t touch him. Especially since he became later the deadliest antisemite ever. (In my book I go into this and explain it.)

Kubizek studied successfully at the conservatory. In 1908 in Vienna, Hitler also had – just as earlier in Linz – no need for other friends. Apart from Kubizek he had no connection whatsoever with another human being, not even with his sister or brother-in-law in Linz anymore. He only occasionally shook hands with anyone. It even seemed, his friend said, that he was scared of physical contact with people. Here again we see some characteristics which may be connected to developing excessive distrust: “People who have less contact with friends and family are more likely to suffer from paranoia.”

After his exams August Kubizek returned to Linz. Hitler walked with him to the West station, waved him off and did not like being left behind. When Kubizek returned in November, Hitler was nowhere to be found in the Stumper Gasse. He had left no forwarding address, nor a message of any kind. Kubizek asked Hitler’s family, but they also knew nothing. Presumably, Hitler had cut off contact so suddenly because he had been rejected by the Academy once again. Apparently, he didn’t dare face his friend Kubizek, who was so successful at the conservatoire, now he had been rejected for the second time. This time, he didn’t make it through the first round. Here, again, we see two experiences that are known to be possible triggers for paranoia: a traumatic event and a blow to his self-worth. Now that the door to his artistic career had been truly shut, this must have been an even more terrible blow to his self-esteem.

This is where his social decline began. Hitler became homeless, slept in parks and under bridges. Hitler must have been seriously worried about his future. “Worry brings implausible, fearful ideas to mind; there is a close link between worry and paranoia.” Now he must have felt gloomy and wretched. “The second major emotional trigger for paranoia is low mood. For instance – feeling miserable, sad or depressed.”

In spite of the two rejections by the Art Academy and subsequent life in extreme poverty, Hitler stuck to the idea he was an artistic genius. He began to see himself as someone whose abilities were not acknowledged, indeed: he saw himself as an unsung hero. So he felt special and “if a person doesn’t receive the recognition, he feels he deserves, he may feel that others are deliberately trying to undermine him”. A distrustful state of mind may then emerge.

He was a soldier/corporal for four years. In October 1918, Hitler fell victim to mustard gas in Flanders and was blinded. Hitler had been wounded once before. But this latest injury, his blindness, must have been an extremely traumatic event for him. He was taken to the military hospital in Pasewalk, where on 10 November 1919, he heard the unthinkable from his sickbed, namely that Germany had lost the war. This was his greatest trauma, “a Major Life Event”. The defeat opened the door to feelings of despair, fear, worry and certainly anxiety. All feelings that can promote paranoia. Once again, he was stepping into a threatening world, which must have reinforced his distrustful spirit yet again.

Now I will take a leap in time. We land in May 1919 and beyond. Hitler came into less uncertain waters. He was lucky, he could join the new strongly anti-Semitic Reichswehr. Soon he was trained as an anti-communist propagandist. In that environment he was, just as in Vienna, strongly influenced by anti-Semitic ideas. However this time this body of thought touched him and began to give answers how the political world works. Before that time his paranoia was diffuse, not focused on anything concrete. But from the period from May to August 1919, his paranoia materialised in anti-Semitism due to the strongly anti-Jewish climate. In that period he recognised the truth about the political world, that is: anti-Semitism, in particular, the claim that the Jews tried to undermine and destroy Germany. It won’t take long before he had constructed a complete anti-Semitic world view. So the Jews were the greatest possible threat. Finally, his paranoia had materialised and reached its target.

In right wing Germany fear of Bolshevism prevailed, because communist rebellions in western and Eastern Germany took place after the defeat in November in 1918. Russia’s 1917 revolution remained an inspiration. Hitler was seen as a good candidate for propaganda against communism. On 19 August 1919, he arrived in Lechfeld as an anti-communist officer. In this camp, repatriated soldiers were located many of whom had been ‘contaminated’ by communistic ideas, at least that is what Hitler’s superiors thought.

Hitler pointed out the dangers of Bolshevism (that was his duty), but he also spoke of the Jews in Lechfeld: he raged against the Jews in the presence of the soldiers to such an extent that the commander of the camp, Oberleutnant Bendt, felt called upon – for fear of charges – to ask him to temper his anti-Semitism. This is evidenced by a written notice by Bendt, dated 25 August 1919. At the same time, the report is the first reference of anti-Semitic statements made by Hitler in public. Hitler had thus become an anti-Semite – by August 1919 at the latest. Anyway there is no single reliable source from before that date that says he was already an antisemite.

We reach a more or less surprising conclusion. As Hitler’s paranoia materialised in anti-Semitism, including a whole anti-Jewish world view, the two were the same. And Hitler fell into the ‘select’ group of people who score the highest for paranoia (I worked that out in my book). Therefore the man was a paranoid who had no rivals but enemies to be destroyed. In fact one could say: without a paranoid Hitler, no genocide of the Jews.

One more comment. Certain feelings, events and circumstances may cause paranoia. If they apply to someone, it doesn’t necessarily mean he becomes a paranoid. With respect to Hitler, it was definitely the case he became a paranoid. This aspect, I worked out in depth in my book. Unfortunately there is no space here to demonstrate that here. The same applies to many other aspects of the book, which together make a new contribution to the overall picture of Adolf Hitler.