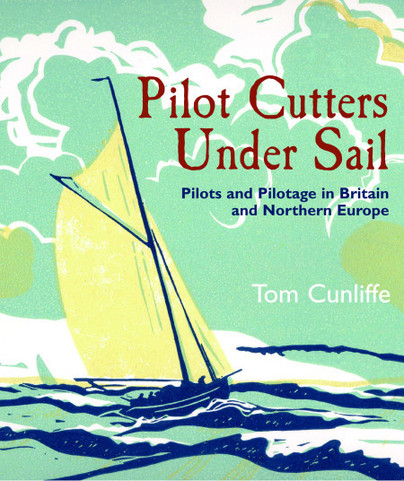 Tom Cunliffe, author of ‘Pilot Cutters Under Sail’ has owned three pilot cutters over a period of thirty-five years and sailed more miles in them than most. Here he recalls a spine-tingling incident that occurred on his initial sail with the 50ft, 1911 Bristol Channel Pilot Cutter, Hirta.

When the psalmist observed that darkness and light are both alike to the Almighty, he set the likes of us solidly apart from our creator. For me and, I suspect, most sailors, the night does not shine as the day. Indeed, in all but the fairest weather it is a time to get through, waiting for daylight so we can see to find the reef tackle.

The slow march of the hours between sunset and sunrise marks our passage more surely than any ticking clock, offering the small-boat seaman an enforced period of reflection as he stands his watch alone in varied conditions. The clear nights late in the year when Orion shakes off his summer sleep to stride the southern skies once more; the moonless tropic dark with the tradewind humming, the mainsheet tight as a board, the wake thrashing invisibly astern and Scorpio lifting his tail in eternal threat to watch out for squalls; hove-to far out in the Western Ocean looking for the day that seems never to break, hoping the gear hangs on as the boat shoulders the giant black seas and the gale holds her firmly against the rudder. It’s natural we should remember the theatricals, but for me, the most memorable middle watch was spent below in my bunk running up the Bristol Channel in a gentle rain.

I had just collected Hirta, the Barry pilot cutter I subsequently owned for fifteen years. She’d been in Scotland for a quarter century and my shipmates and I were on passage to her original home port. At that time she had recently turned seventy. Launched for Pilot George Morrice shortly before the official end of the sailing pilot service, she was built for competition.

Each Bristol Channel pilot ran his own business from his own cutter. When the wind was in the west, as it usually still is, the man furthest down-Channel had the best chance of securing the richest prize. This gave rise to some gruelling tests of endurance and weatherliness. Over the years, the cutters had grown bigger and more able. By 1911, radical pilots were commissioning some very fast craft indeed. Kindly Light, Frolic and others had proceeded so far down the road to performance that they had sacrificed some of the traditional pilot cutter’s ability to stop as effectively as they could go. Hirta’s owner, Morrice, was of a more moderate nature. We know this, because a man’s boat tells us much about his character. While some of her competitors were veritable flying machines, unwilling to heave to on station and wet as half-tide rocks, Hirta was the final word in wholesome design. Over the thousands of miles I sailed her, I came to realise that while her fifty-foot deck length gave her an acceptable turn of speed in the right conditions, she was as well-mannered a craft as I am ever likely to come across. She never missed stays unless I was at fault, she would bear away in any circumstances at a touch of the helm, even if her mainsheet were pinned in hard; she slowed down without developing weather helm if the staysail was lowered. She would sail reliably astern as she backed off from her noble fisherman anchor, and when the storms blew too hard for her crew (though rarely for her), they had only to shove the helm down, leave the headsail sheets on their cleats and she would tuck her head under her wing. Hove-to like this, I watched her sit out gales from Greenland to the Gulf Stream with such serenity that all hands felt as safe as they would have done in church.

Despite these admirable qualities, on the night in question I’d already discovered that, like everything near-human, the boat was not without sin. Although bottle-tight on her mooring, she leaked on that first passage just as she did on every subsequent trip she made in my ownership. I spent all my substance trying to plim her up, but to no avail. Time has taught me, however, that so long as a crew can pump the ocean out significantly faster than it comes in, they are on the right side of the equation of buoyancy. We therefore accepted the shortcoming as a fact of ageing and lived with it in reasonable tranquillity.

My watch on deck came to an end ten miles south of Worms Head at the beginning of the spring flood. It was midnight and Barry lay forty-five miles over the bowsprit. At this stage in her life, Hirta was probably the most original pilot cutter surviving. She had her 1911 mast and boom, her cockpit and companionway were exactly as Morrice ordered them from her Cornish builder, most of the old bulkheads remained, as did her original water tank under the table in the middle of the saloon. My prudent Scots predecessors had kept her innocent of the yachtsman’s fetish of running backstays and she had no electric lighting of any sort, on deck or below.

Down in the warm security of the white-painted forecabin I shrugged off my oilskins, blew out the oil lamp and pulled the blanket over my head. Maybe an hour later, I was drifting in that half-world between sleep and wakefulness when I heard the watch on deck pump the bilge. Thirty strokes. We’d already begun to call this ‘standard leak rate’, so all was well. Then silence. The sea had gone right down. The occasional creak resonated through the hull from the gaff way aloft in the darkness as the boat surged gently on the following swell, and I became aware of a strong sense of history. The boat was alive all around me. Here she was, back in the waters she was built for and which she had not sailed since the First World War. These were the same oak frames, the same iron bolts holding the deadwoods together, the same spars, the same village pump by the cockpit. Even the flax canvas mainsail could have been from her working time.

Then, neither in dream nor reality, I heard a steamer’s screw thump-thumping beyond the pitch-pine planking. Footfalls shuffled on deck over my head. A muffled bell rang twice, the great propeller went silent and a clear Welsh voice rang out,

‘Barry.’ came the distant response from across the quiet water.

‘We are the Barry Pilot!’

Above my head the punt was launched with a rumble and a splash. The diminishing swish of a single sculling oar faded to nothing. Another bell came shortly afterwards as the steamer got under way and I knew no more until the grey morning slithered into my cabin though the deck prism.

We ghosted silently into Barry on the top of a brimming tide. The drizzle still fell and instead of the crowds with bunting and sunshine I’d somehow expected, the cutter’s only welcome came from a solitary old man in a flat cap leaning over the bullnose. As Hirta rounded up in the dock, he raised a single hand. It was enough.

For more on all aspects of sailing,

and take a look at his Youtube Channel ‘Yachts and Yarns’.

Pilot Cutters Under Sail is out now in ePub and Kindle edition. You can preorder a paperback edition here.