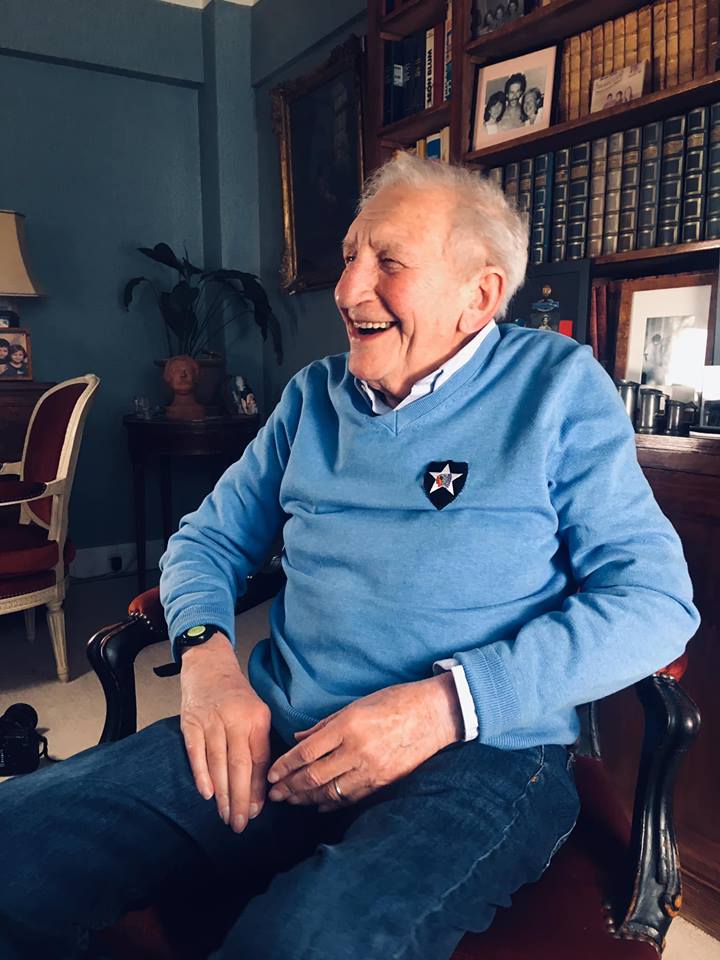 Bernard Dargols, French GI at Omaha Beach has passed, at age 98, a few weeks before the 75th D-Day commemorations

It is with great sadness that we informed you of the passing of Bernard Dargols, French WW2 veteran who fought with as a GI of the 2nd division Infantry in the US army. Below follows an obituary announcement made by Bernard’s granddaughter and biographer, Caroline Jolivet.

At the age of 18 in 1938, the young Parisian, Bernard Dargols, left Paris for a one year internship in New York City. When the war started he realized he couldn’t go back to France where he would have been enrolled in Pétain’s army.

He stayed in New York City and continued working as an intern on 25th street. His will to fight grew stronger as he heard the news from Europe. He decided to join the American army in which he thought he could be more useful.

With a good friend of his, Bernard created “Jeunesse France Libre”, an association –located close to 42nd St – to gather French-speaking youngsters who shared the same goal to fight against Pétain and the Nazis. One day, Françoise Benoit-Levy, daughter of a French film-maker in charge of the cinema section at the United Nations in 1942, came in to become a member and would later become his wife.

Dargols started a long training from in various camps that led him to the very secretive Military Intelligence Service Camp, Camp Ritchie.

On June 8th, as a special agent in the 2nd Infantry Division (the Indian Head), Bernard landed on Omaha Beach with his brothers in arms. He was 24. His mission consisted in interrogating French civilians in occupied villages accompanied by an MP to gather as much information as possible, go back to his HQ to allow his division to enter the villages and fight the enemy.

Hearing an American GI speak French with a Parisian accent and call his jeep « La Bastille » (name of his childhood neighborhood in Paris) was very surprising and emotional for French farmers who acknowledged Bernard and his mates as their “liberators”.

During a leave, Bernard went to Paris in his jeep and got back to his mother he hadn’t seen for 6 years. Part of the family had been killed in the camps.

When war ended, Bernard went back to New York where he married Françoise and they had 3 children, then 4 grandchildren and 5 great-grandchildren.

Bernard Dargols had not told his story before 40 years after the war. His grand daughter Caroline Jolivet, wanting to know more about her own family history, started asking her grandfather questions when he finally started talking. She found and used hundreds of letters written between Bernard and his family , so, she wrote his story in a book first published in French « Bernard Dargols, un GI français à Omaha Beach » by Ouest France Editions and published in English in 2018 by Pen & Swords UK « A French GI at Omaha Beach.”

Bernard Dargols received many medals of honor and celebrated the 70th anniversary in Normandy in 2014 where he proudly shook Barack Obama’s hand.

Bernard was a jazz lover, and what he liked most of all was to share good meals with his close friends and family in the suburbs of Paris where he lived most of his life.

In spite of his age, Bernard always agreed to share his memories in schools or during conferences, warning that History could repeat itself. What mattered most was never to forget and always fight against racism and antisemitism.

You can read Bernard Dargols’ incredible story in A French GI at Omaha Beach available from Pen and Sword.