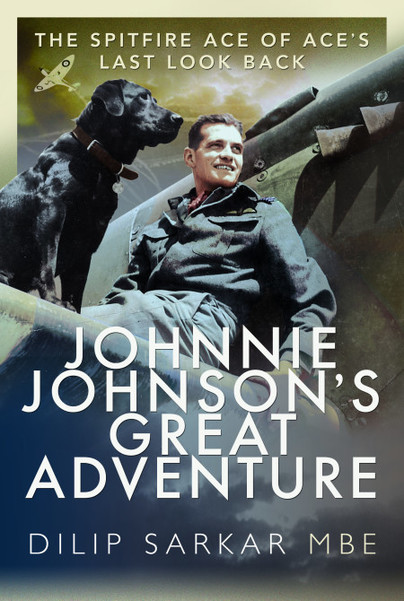 It was when growing up in the 1960s that I first heard of Johnnie. Airfix produced a 1/72 scale plastic model of his famous Spitfire Mk IX, EN398, which Johnnie flew whilst leading the Canadian fighter wing at Kenley in 1943, the aircraft bearing the Wing Leader’s initials, ‘JEJ’, on the fuselage, along with a maple leaf motif. I made the model many times as a schoolboy. Years later, with my aviation historical research and writing at full throttle, I met the man himself: immensely charismatic and gregarious, Johnnie loved the company of his wartime pals and like-minded enthusiasts. We hit it off immediately. Throughout the happy years ahead, we spent hours in each other’s company, at events, book-signings, lectures, and – best of all – sitting in ‘Greycap Leader’s conservatory man cave, brimming with his personal memorabilia, just the two of us, talking about the war, Johnnie’s experiences, and recording these conversations.

A couple of years after I wrote Bader’s Tangmere Spitfires (Haynes, 1996), I persuaded Johnnie to cooperate with me to produce Johnnie’s Kenley Spitfires. I began tracing and corresponding with his Canadian pilots, and putting the project’s framework together, but sadly Johnnie became ill and largely withdrew from public life. On 30 January 2001, aged eighty-five, ‘Greycap’ left us for blue skies. Johnnie’s passing left a huge hole in my life, an unfillable void.

Instead of our original plan, I later decided to cover Johnnie’s story in three volumes, the Spitfire Top Gun series (Part One: Ramrod Publications, 2002, Part Two: Victory Books, 2005), but never got around to writing the third and final instalment. Instead, I wrote Spitfire Ace of Aces, being the full account (Amberley Publishing, 2011). For a variety of reasons I was never entirely happy with any of those books, which were all produced during what was a difficult period of my own life. All these years later, I have at last been able to do the job properly – and do Johnnie justice – thanks to Johnnie’s youngest son, my very good friend Chris Johnson.

Firstly, Chris gave me permission to edit, contextualise and publish his august father’s 1942 diary – which not even I had ever seen. 1942 is, in fact, a very interesting year in the air war over northern Europe, what with the FW190’s superiority over the Spitfire Mk V, the ‘Channel Dash’, the disastrous Dieppe landings and the Americans making their first daylight raids on German targets in France – highlighting the lack of a suitable long-range Allied escort fighter. In this diary, though, we get a glimpse of the real Johnnie, a remarkable document on both an historical and human level. This book, Johnnie Johnson’s 1942 Diary: The War Diary of the Spitfire Ace of Aces, will be released by Pen & Sword in October 2020.

Secondly, Chris also gave me Johnnie’s unpublished last look back, The Great Adventure, in which ‘Greycap’ recounts his adventures between D-Day and the war’s end – with a little reflective comment at the end. Johnnie was actually a gifted writer and a highly intelligent, well-read, individual. Indeed, his wartime memoir Wing Leader, published in 1956, remains well-read even today – and contains some stunning descriptive passages of flying and fighting in the iconic Spitfire. So, again with edits and context from me, Johnnie Johnson’s Great Adventure: The Spitfire Ace of Ace’s Last Look Back will be released by Pen & Sword in November 2020.

Finally, Chris also encouraged me to publish Johnnie’s personal photographs, which represent a truly illuminating pictorial window on the great man’s war. So, having edited and written captions to over 300 pictures, Spitfire Ace of Aces: The Album – The Photographs of Johnnie Johnson, will be published by Pen & Sword in March 2021.

Today, I am happy that I have been able to do Johnnie’s memory justice, thanks to Chris, and these new books will give his name and story currency once more.

Although we held an impressive and moving memorial service for Johnnie at the ‘RAF Church’ of St Clement Danes in London’s Strand on 25 April 2001, the only memorial to this giant of a man, a leader of true natural genius, is a bench at his favourite trout fishing spot on the Derbyshire Wye, where his ashes were scattered. The bench’s plaque reads, quite simply ‘In Memory of a Fisherman’. In so many ways, that is just so…. Johnnie. RIP Greycap Leader.

Watch a This Is Your Life episode here featuring Johnnie Johnson’s life, including appearances from many wartime fighter aces here.