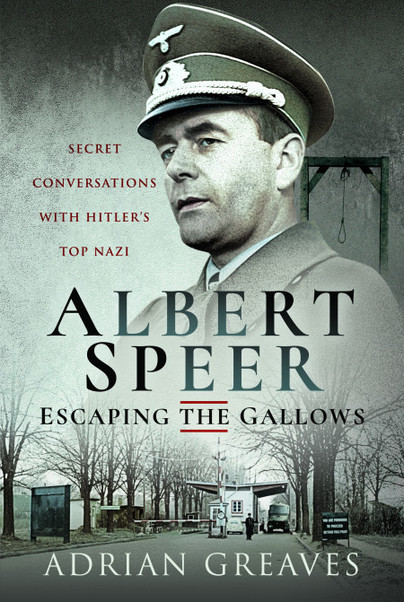 ‘More beguiling and dangerous than Hitler.”

On the night of 10 May 1941, Hitler’s deputy, Rudolph Hess, made a secret unauthorised solo night flight from Germany to Scotland in a misguided attempt to make peace with Britain. He parachuted near Glasgow and was quickly arrested. Churchill ordered Hess’s detention in the Tower of London, then in Wales. Hitler declared Hess ‘insane’.

A year later, a recently married young Artillery officer was on a course in Wales; his wife was a typist in one of the ministries in London. This officer was unexpectedly detailed to escort Hess to Surrey for medical reasons after which the newly married pair met up, and nine months later Adrian was born.

In 1960, the fit and enthusiastic seventeen-year-old Adrian joined the army and within days of his eighteenth birthday he was commissioned into the Welch Regiment serving in Berlin. Sixty years later he showed friends his written accounts detailing his experiences in Berlin as a young army officer during the cold war; he wrote;

‘I joined the Royal Sussex Regiment training depot at Canterbury as a Private soldier. I loved soldiering and rapidly progressed to becoming a corporal. This coincided with the army’s discovery that I had several ‘O’ levels and, although still seventeen, I was sent for officer training. Towards the end of a long, tough and gruelling four-month course, with just three days to go before the grand commissioning parade, and my posting to Berlin, disaster struck. The army discovered my age. I was extracted from the final practice commissioning parade and, fearing the worst, marched to the adjutant’s office.

‘Greaves, how old are you?’

‘When were you eighteen?’

‘You’re too young for a commission; you will be re-coursed to next year.

Then the telephone rang. It was an urgent telephone call from the War Office; the international situation surrounding Berlin was critical. The War Office instructed the adjutant that the five potential officers due to join units in Berlin, including me, were to proceed directly to their postings following Saturday’s commissioning parade. I quietly thanked the Russians for flexing their military muscle.

A week later and proudly commissioned, I set off to join my regiment in Berlin, a divided city more than a hundred miles behind the ‘Iron Curtain’. It was especially exciting for someone whose friends were still at school. I took command of a platoon of 30 soldiers patrolling and observing Russian troops massing along the border of the British sector. The Russians sought to curtail the exodus of people fleeing to the West, and did so brutally. Some escapees died under a hail of bullets as they ran for the boundary line with West Berlin; I witnessed a number of these attempts. Allied forces were under strict orders not to assist or intervene in such escapes.

After a month in Berlin, I was detailed for my first two-day duty as guard commander at the nearby gloomy Spandau Prison housing the last three Nazi war criminals, Hitler’s deputy -Rudolph Hess, the Hitler Youth leader -Baldur von Shirach and Hitler’s armaments Minister, Albert Speer. Due to my father’s connection with Hess I was excited by the prospect of meeting him.

The British prison governor showed me around the prison and, because of my father’s connection, I requested his permission to speak to Hess. We reached the cell corridor just as the duty warder was unlocking the prisoners’ cells. It was a short walk from their bleak cells to the extensive prison garden for their afternoon of ‘free time’. The garden and prisoners’ activities were under the watchful eyes of my soldiers manning the six observation posts. Slowly, the three prisoners, dressed in ill-fitting prison uniforms, emerged and stood motionless in front of their respective cells. On noticing the governor, they shuffled to attention. The governor nodded to me, I stepped forward and introduced myself to Rudolph Hess with the sentence that started my relationship with Albert Speer: ‘Herr Hess, without your peace-seeking flight to Scotland, I would not have been born, so thank you’.

Both Hess and Shirach ignored me and sloped off. In perfect English, Speer paused and invited me to join him in the prison garden, and that was the beginning of my three year association with him. Thereafter, to progress my secret conversations with Speer, I volunteered to ‘fill in’ when guard commander vacancies occurred.

Speer was amused I was such a young army officer and teasingly opined that I should still be at school. Nevertheless, he took a shine to me, and I would learn much from him about his rise to power, his attitude to Hitler’s henchmen, and his own appointment as Hitler’s personal architect before becoming the Third Reich’s armaments minister.

Our conversations, always in the prison garden, were conducted in both English and German. Speer was keen to improve my linguistic skills which, under his tutorage, enabled me to pass the Civil Service German interpreters’ examination at my first attempt. Despite our disparate ages and positions, he clearly enjoyed our conversations, which I recorded at the time in an old schoolbook. His attitude to me was always friendly and courteous, and he spoke excellent English. Conversely, Hess and Shirach ignored me.

Speer fascinated me; he always denied any knowledge of the brutality of Hitler’s Third Reich or the cruel fate of German Jews and peoples of neighbouring German occupied countries. Millions were displaced to Germany as forced labourers in inhuman conditions, many in Speer’s factories where large numbers were beaten, shot out of hand, or sent to concentration camps, mysteriously without Speer’s knowledge.

Speer frequently reminded me that any challenger to Hitler’s orders risked arrest, along with family and work colleagues – and their likely execution.

Speer sometimes took me by surprise, especially when admitting his intense long-standing relationship with Eva Braun, Hitler’s mistress. Eva was vivaciously attractive as a young woman and for several years, at the request of Hitler, she had accompanied the Speer on their holidays to give Eva ‘a break’. Frau Speer was well aware that her husband spent long weekends at Hitler’s Alpine retreat, often in the sole company of lonely Eva. Hitler thought Speer was a safe companion for her during Hitler’s constant late night military briefings.

Speer confided to me about another mystery which has always confused ‘Speer’ writers – why, having flown from Hamburg to the Hitler Bunker in Berlin to make his farewell to Hitler, Speer flew two days later back to Berlin just before Hitler’s suicide. He tried to save Eva Braun – but, even having plied her with champagne, she refused.

Another bombshell related to Speer’s urgent post war interrogation by senior Americans when he proved conventional bombing would take years to defeat Japan. He advocated they drop an atom bomb; they did. But Speer always lied; he denied war profiteering but his death revealed his valuable collection of stolen paintings, which his daughter gifted to an Israeli charity’.

Photos from the author’s book ‘Albert Speer; Escaping the Gallows’.

Albert Speer – Escaping the Gallows is available to preorder here.