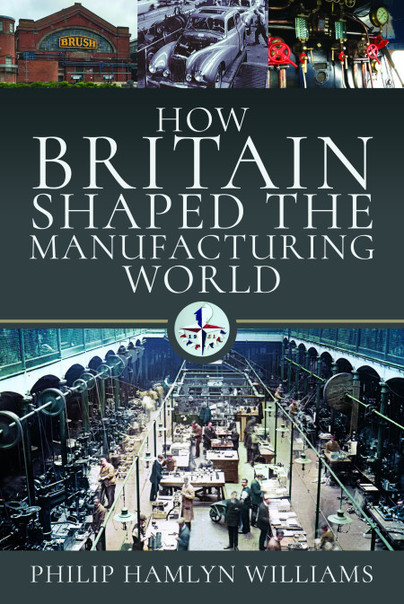 People tell me time and again that we don’t make things anymore, that manufacturing is dead. I have found that this is far from the truth. But what then is the reality; what is the story of British manufacturing?

I wrote my book, How Britain Shaped the Manufacturing World, by looking through the prism of the Great Exhibition of 1851 at which my great grandfather exhibited and which told the world that Britain was top dog. I then looked ahead to the Festival of Britain of 1951 and explored an astonishing progression.

The story began with falling prices. The weavers of Lancashire had brought their ancient skills, honed on wool and flax, to the weaving of cotton brought in by ship from countries of the Empire and beyond. Shipping was key as it would be for many decades. The Napoleonic wars brought about a collapse in textile prices, and merchants sought ways to cut costs – all too familiar. The answer came in fits and starts, from men who knew the processes from raw cotton to woven fabric – men like John Kay, James Hargreaves and Richard Arkwright who had learnt the hard way, on the job. The mechanisation that resulted demanded more power, more than animals and waterwheels could provide. The answer, not surprisingly, lay in the mines which landowners were sinking to extract black gold – coal. Mines flooded and needed to be pumped, and steam contraptions seemed to provide answers. Once again it was men learning on the job, men like Savery, Newcomen, Trevithick, Blenkinsop and Stephenson. The crude atmospheric pump developed into the steam engine driving a rotation. That rotation found employment in the mills of Lancashire powering banks of machinery, as well as raising tons of coal from the depths of the earth. Fruition came in the rotary engine that could propel a vehicle along parallel rails – the steam locomotive.

Very much in a nutshell that is my take on what was the start of Britain’s industrial revolution and it could have ended there. It was though a world brimming with opportunity. Railways greased the wheels of trade, and entrepreneurs were all too ready to risk their money and that of their investors in building railways linking mines and mills to ports and markets. Why stop at the coast? Thomas Brassey, the supreme railway contractor, is said to have built one sixth of Britain’s railways and half of those in France.

Steam power had many applications and I explore these in the book, with men like James Watt and Matthew Boulton, Isambard Kingdom Brunel, William Armstrong, John Brown and Vickers, Joseph Ruston and Richard Hornsby

Oil did of course take up the baton from coal, but with the French and Germans in the driving seat. Yet, there were British engineers keen to exploit the power of oil, not least Hornsby who championed the oil engine before Diesel. The problem lay in the caution of government and the forces of the status quo. Men had driven steam powered vehicles on the roads with dire consequences, and so speeds were restricted by the legendary red flag. Once this was removed, the engineers of Coventry bounded into life with first the Daimler factory at Coventry Mills. Contrary to popular opinion, Britain was and is good at exploiting other peoples ideas. The names we all love followed: Lanchester, Humber, Hillman, Sunbeam, Morris, Austin, Rolls-Royce, Bentley, Jaguar. I explore their story not forgetting Lucas whose role was pivotal.

Oil powered not only road vehicles but ships, aircraft and, finally trains. With aircraft it is easy to see how two world wars built an astonishing body of expertise. Frank Whittle’s jet engine would begat gas turbines as well as aero engines. We were very good at making ocean going liners powered by steam turbines; we ruled the waves. On the railways, we held world records thanks to the Flying Scotsman and Mallard. Yet even with diesel electric who can fail to thrill to the sound of a Napier English Electric Deltic or the many locomotives produce by the Brush Falcon works in Loughborough.

Electricity was a further source of power, or more accurately power transmission, where Britain led the pack with two Italians (Marconi and Ferranti) and Germans (Siemens and Hirst) who found the business environment in Britain more conducive to innovative ideas. Yet, it did require American capital, in the form of Westinghouse with Metropolitan Vickers in Trafford Park Manchester and General Electric with British Thomson-Houston in Rugby, to create a heavy industry. Three British-managed giants grew from this transatlantic base: AEI, English Electric and the British financed GEC. I explore their story but also that of the radio pioneer: Pye, Echo, Murphy, Plessey and Decca who brought musical entertainment into the nation’s front rooms, and in time begat radar and communication systems that would be vital in WW2.

In Britain in the twenties, Alfred Nobel and Ludwig Mond came together to form the giant ICI from which came polythene, Perspex and terylene. Their organic source was industrial alcohol from Distillers the whisky producer. ICI’s secret, was a commitment to research and development, seldom a darling of British boardrooms. ICI had started out convinced they could make money from fertiliser not realising that other countries would do the same. Their response was not to cut costs but to spend money on scientists giving them the freedom to explore new horizons. Elsewhere, Glaxo became a pharmaceutical giant from its start in dried milk and baby food. Wellcome , brought into being by two American drug salesmen, became the intellectual heart of British pharmaceuticals, whilst Boots the Chemist and Beechams dealt with aches and pains. In parallel Courtaulds transformed the textile industry with rayon as an alternative to cotton and British Celanese produced a substitute for silk, all in vast quantities.

The Festival of Britain of 1951 marked an end to this remarkable era. It was not a trumpet blowing occasion as the Great Exhibition had been. It was a celebration of what it meant to be British. There was much to be proud of. In only a few months after the Festival closed its doors, the country had a new Queen and boundless optimism of what the future might hold. I tell the story of that future in my next book, Whatever Happened to British Industry.