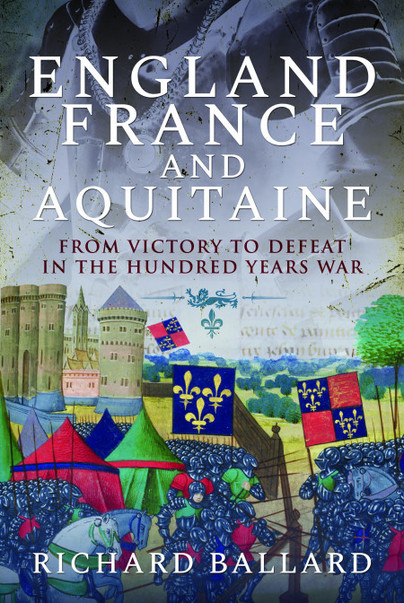 Today on the blog we have an exclusive interview with Richard Ballard. Richard’s new book England, France and Aquitaine is out now.

The book is about the loss to the English crown of the Duchy of Aquitaine, which it had possessed since the twelfth century, and which Charles VII of France conquered as part of the same operation by which he expelled the English from all French territory except Calais in the middle of the fifteenth century. But, as I worked on the project, it appeared essential to expand the narrative in reverse towards the apparent English success at Agincourt in 1415 and in advance to the truce made at Picquigny in 1475. It is about the attempt by Henry V of England to impose a dual monarchy on England and France by his Treaty of Troyes in 1420, which, after his death only two years later, his brother, the Duke of Bedford, tried to maintain against the reorganized French monarchy of the House of Valois with its unified military and  efficient financial systems. The contrast between the increasingly autocratic system in France and the lack of cohesion in the English system of government during the minority and then the reign of Henry VI, had to be stated and understood, followed by an appraisal of the attitudes of Charles’s successor, Louis XI, and Henry’s, Edward IV, leading to the truce which ended the fighting of the Hundred Years War.

I was inspired to write it after moving about in south-western France from 2003 onwards, and wanting to emerge from my preoccupation with the French Revolution of 1789, carried over from my teaching career into my first two published books after I had retired.  When wine merchants from Castillon announced that their product was “nourished by the blood of the English” at Saturday markets in the Charente-Maritime, my interest was aroused, and I had the good fortune to be introduced to a retired Archivist who was revising an older account of the battle of Castillon and who invited me to join him and his associates in visiting the battlefield itself.  No military action happens without political initiatives, so my interest in the fifteenth century, dormant since graduation in 1960, was revived, and the facilities for enquiry became available to me.

Since most of my teaching involved the distillation of other people’s historical research into teaching material, along with the development of a technique for storytelling, I am hoping that my book will appeal to sixth form students or their equivalents in the English-speaking world and to undergraduates; and not only to them, but also to anyone who enjoys reading about past events in relation to contemporary issues. Brexit and its divisive results was the context of its period of preparation, and I had to resist the temptation to make some dubious connections, though I could not forbear to describe Talbot’s expedition to reconquer Aquitaine which resulted in his defeat and death at Castillon in 1453 as an attempt by the English to “take back control!”

My main discoveries have been in trying to make character studies of the monarchs involved in the story: all the kings, Joan of Arc (in passing only), at least two queens, John Talbot, Earl of Shrewsbury, Richard, Duke of York, and lesser personalities like Humphrey, Duke of Gloucester and Charles VII’s financier Jacques Coeur. Discoveries for me were also in terms of events: the Agincourt campaign, the Armagnac/Burgundy dispute, Charles VII’s coronation at Reims, the demonstrations of the Bordelais’ loyalty to their English king/Duke led by Archbishop Pey Berland, and perhaps, most important of all, the effect of the French conquest on the lives of the inhabitants of Bordeaux and other Gascon areas with special consideration of their wine-based economy.

My research has been in contemporary documents which form primary sources, such as are kept in the newly housed Archives of Bordeaux and the departement of the Gironde, and which have appeared in The Gascon Rolls recently published on line by Dr Malcolm Vale and his associates. I have had a long look at contemporary chroniclers on both sides of the Channel and tried to take in and distill the copious secondary materials emerging from the nineteenth century onwards, a growth industry in both nations since nations were being invented at the same time as the events this book tries to present.

I think the hardest part for me was an assessment of the power struggles associated with the minority and subsequent mental illness of Henry VI, presented with the impossible legacy from his father in the form of the dual monarchy, leading to the erosion of that legacy and the Wars of the Roses against an under-mighty king.

I have used only six illustrations. Three are important because they illustrate the political stances of three of the protagonists. Henry V is represented in a bas-relief, subsequently (and literally!) defaced by participants in the English civil war, in his chantry chapel in the centre of Westminster Abbey; Henry VI by the Founder’s Statue at Eton College; Charles VII by the miniature in a! Book of Hours which depicts him as the king who offers the gold of his conquest of Aquitaine to the Christ-Child at the Epiphany. The other three are the work of the nineteenth century illustrator and antiquary Leo Drouyn, whose pictures of what remained of fifteenth century Aquitaine in his time are intensely fascinating.

Is there a unique angle to this book and if so, what is it?

A unique angle has been to explore the failure of the resistance offered by the Gascons loyal to Henry VI to the apparently irresistible consolidation of the French kingdom from the English Channel to the Pyrenees.

How long is the book? Why that length?

The book is 280 pages in length, plus the apparatus, deliberately limited in the hope of combining some erudition with accessibility.

I considered myself qualified to write this book by living close to Bordeaux and having the leisure of retirement to do the necessary reading, and, not to be overlooked, the passion to understand the events stimulated by association with the regional historians it was my privilege to encounter, particularly in the lectures given at the Archives in the town of Jonzac, capital of the Haute-Saintonge, where I spent a very happy five years.

What I have learned in the course of writing this book is that to write anything succinct about a complex subject requires a good deal of hard work which takes you over. Being obsessed by the task has to be resisted!

I would like to think that the chapters concerned specifically with the Gascons are the most worthy of readers’ attention. Their history falls into the category designated by the actor Michael Caine several years ago: ” Not many people know that!”

England, France and Aquitaine is available to order now from Pen and Sword Books.