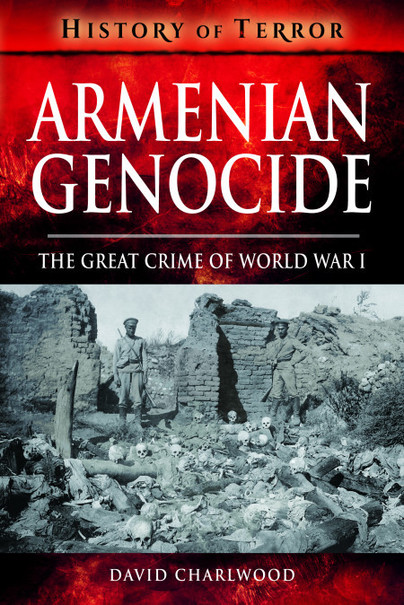 On this day 1915 – The start of the Armenian Genocide

The 24th April 1915 marks the start of the Armenian Genocide, where over 1.5 million Armenians were murdered.

Armenian Genocide is a new, gripping short history that tells the story of a forgotten genocide: the men and women who died, the few who survived, and the diplomats who tried to intervene. We currently have the eBook edition available to purchase for only 99p.

Here’s an exclusive look at the introduction. 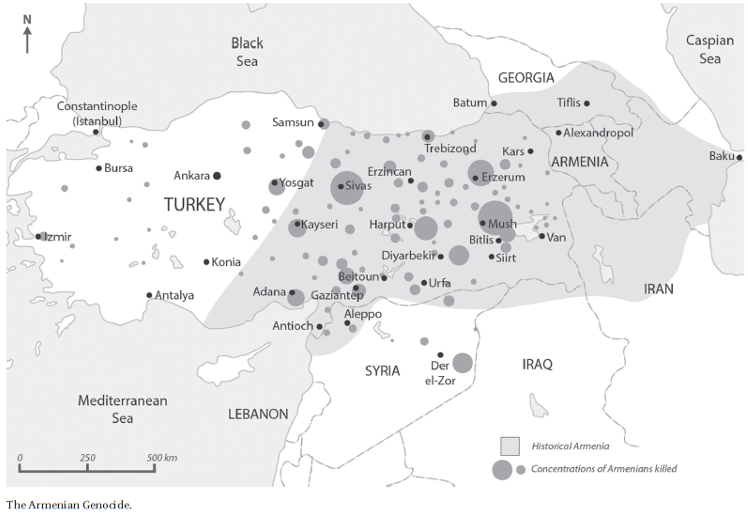 Hitler stood and addressed his generals: “In a few weeks hence I shall stretch out my hand … to redistribute the world.” If any of the men listening were still unsure of the violence of the Führer’s ambitions, he quickly elaborated: “Genghis Khan has sent millions of women and children into death knowingly and with a light heart. History sees in him only as the great founder of States … the goal to be obtained in the war is not that of reaching certain lines but of physically demolishing the opponent. And so for the present only in the East I have put my death-head formations in place with the command relentlessly and without compassion to send into death many women and children of Polish origin and language. Only thus we can gain the living space that we need.” Hitler’s justification, secretly noted down by Admiral Wilhelm Canaris, the head of German military intelligence, was simple: “Who after all is today speaking about the destruction of the Armenians?” It was 22 August 1939. Just over a week later, the German Blitzkrieg decimated Poland.

Hitler’s speech, made to his commanders on the eve of war as they gathered at the Führer’s Bavarian alpine retreat, was never intended to be made public, although it was later submitted as evidence at the Nuremberg Trials. His statement about “the destruction of the Armenians” was, in 1939, largely correct. The deaths of 1.5 million Armenians (as well as perhaps as many as a million Assyrians and Greeks) at the hands of the Ottoman-Turks two decades before seemed to have faded from the pages of history, remembered only by the scattered diaspora who had escaped the systematic slaughter and found refuge in Syria and parts of Europe. But the Armenian Genocide did not occur unnoticed. The U.S. ambassador to Ottoman-Turkey relayed unequivocal contemporary evidence of what was happening to the State Department, multiple eyewitness reports were supplied by missionaries, soldiers and diplomats, and the atrocities were publicly condemned by the governments of the United States, Russia, France and the United Kingdom. Perhaps one of the most remarkable aspects of the twentieth century’s first genocide is how quickly it became convenient to forget it had ever happened. The Nazis would go on to murder millions of Jews in the most organized deliberate slaughter of humanity the world has ever seen, but the Holocaust is now commemorated worldwide: Auschwitz itself is a museum to the most horrific extremes of man’s inhumanity to man and Holocaust Memorial Day is honoured internationally. The murder of six million Jews is not forgotten, but in modern-day Turkey, it is still a crime to remember publicly the genocide of the Armenians.

This short book seeks to tell the stories of those who died, as well as examine the efforts of diplomats from different countries who tried to dissuade key figures in the Turkish government from eradicating an entire race. Some parts of the story (including the genocide of the Assyrians and Greeks) have only been covered very briefly, while other elements have had to be excluded entirely for the sake of brevity. The central narrative follows the American ambassador Henry Morgenthau, who found himself thrust into a diplomatic crisis with no diplomatic experience. His humanity, and the humanity of others who helped and aided the Armenians, shines through in the midst of harrowing accounts from those who endured and witnessed unspeakable suffering.

The Armenian genocide remains an extremely contentious subject, in large part because the Turkish government refuses to acknowledge that it ever happened. Even many modern-day Turks remain sceptical of the numbers of those who are said to have been killed, or the systemic and murderous nature of their deaths. However, it is irrefutable that those who witnessed the atrocities were in absolutely no doubt about what was happening and contemporary reports of the massacre of a million people appeared in newspapers around the world. When, in 1917, a German engineer working in Turkey stumbled across a valley full of sun-bleached human bones, local villagers glibly affirmed that he had found an Armenian mass grave.

Traditionally, the start of the genocide is commemorated as April 1915, when Turkish authorities began rounding up Armenian notables. Soon after, Armenian communities were deported. Many of those who managed to survive the privations of travelling through the desert in the height of summer were then slaughtered en masse, having been stripped of all their possessions, including their clothes. Photographs of piles of naked bodies were smuggled out of the country and shocked the world when they appeared in the Western press. But despite some of the ring leaders facing trial for war crimes, the strong statements of intent to punish the perpetrators made by the victorious Powers of the First World War were swiftly overtaken by events. Less than half a decade after hundreds of thousands of Armenians were marched in convoys into the Syrian desert to be hacked to death, it suddenly became politically expedient to forget such events had taken place. It is little wonder therefore that the Armenian genocide was only the first of many in the twentieth century.

Download a copy of Armenian Genocide for 99p here.