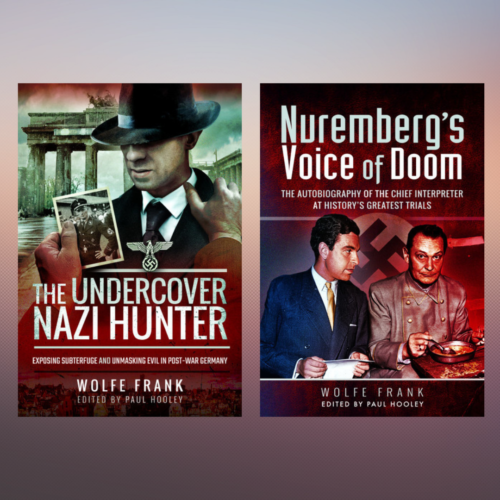 Pen & Sword Books’ publication of ‘Nuremberg’s Voice of Doom’ and ‘The Undercover Nazi Hunter’ has led to the awarding of a Blue Plaque in honour of Wolfe Frank – the subject of the books – who is now widely accepted as having been ‘a wrongfully forgotten hero of the 20th century’. In this blog the books’ author Paul Hooley explains how and why Frank has been recognised.

(Hugh) Wolfe Frank (1913-1988), Chief Interpreter at the Nuremberg International Trials of Nazi war criminals and the leading pioneer of simultaneous interpretation, has recently received belated, but permanent, recognition for his incomparable service and achievements. On 1st October 2021 a Blue Plaque, conferred by Salisbury Civic Society, was unveiled on the façade of his former home, The Malt House, Castle Street, Mere, Wiltshire, to where Frank had retired and where he completed the memoirs upon which my books are based – a manuscript that had, following his death in 1988, remained hidden in a Dorset attic for over a quarter of a century! 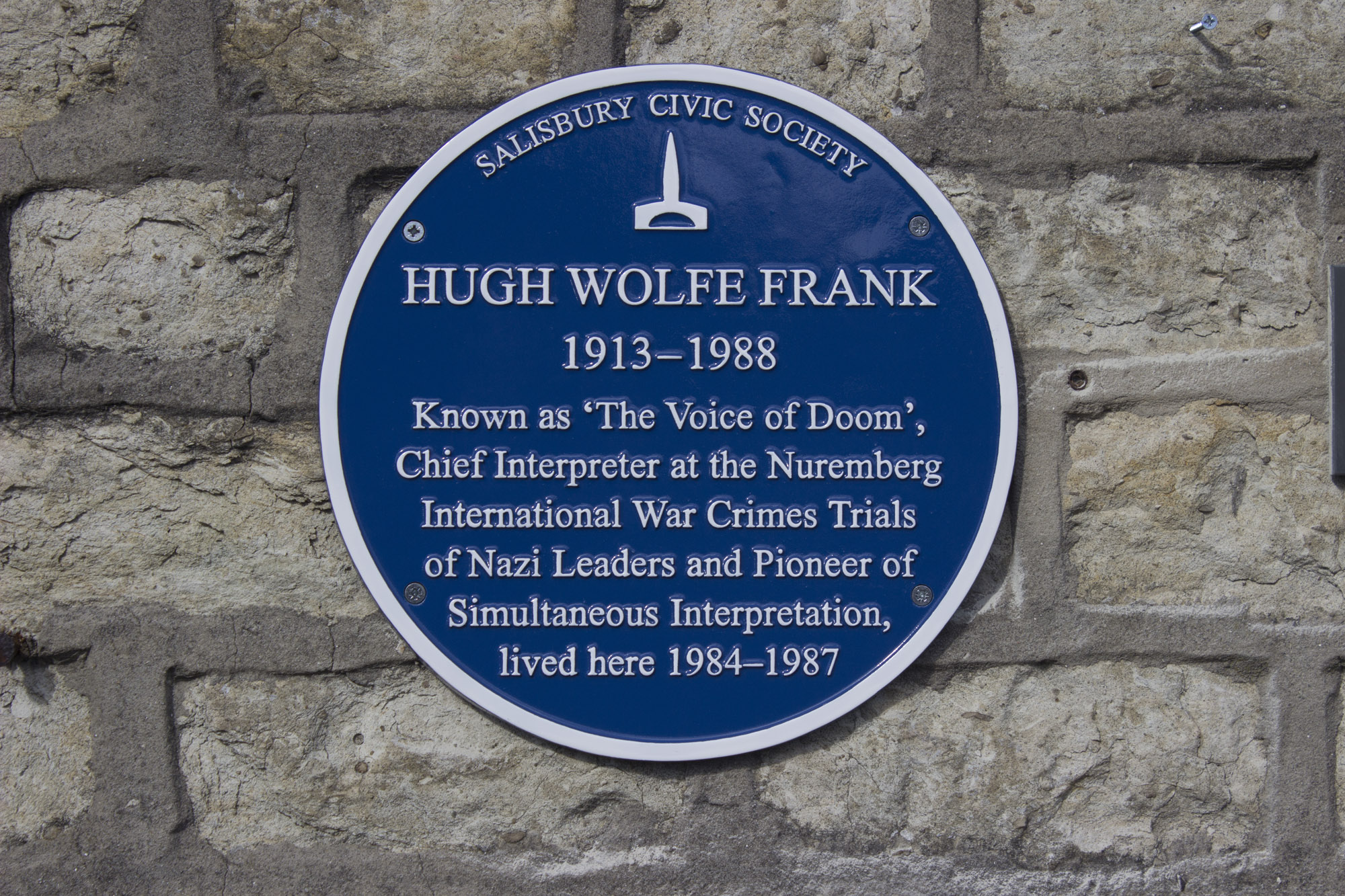 Regarded by many historians as being ‘The Last Battle of WWII’, the Nuremberg Trials were the military tribunals put in place by the Allies after the Second World War to prosecute those members of the political, military, judicial and economic leadership of Nazi Germany, who had planned, carried out, or otherwise participated in the Holocaust and other war crimes.

Exactly 75 years prior to the unveiling, a world-wide radio audience of 400 million had listened to Frank as he announced to the most prominent Nazi leaders the sentences imposed upon them by the International Military Court – following which the world’s media dubbed him ‘The Voice of Doom’.

Without the discovery of the manuscript and the publication of the books, historians and military enthusiasts would have been denied knowledge of unique and important historical information, and the general public would have been unaware of the outstanding accomplishments and daring exploits of a truly brave and charismatic figure.

Frank was the German-born son of a Jewish industrialist and his war against the Nazis had begun on 5th March 1933. Present that day in Munich, at the event celebrating Hitler’s coming to power, he witnessed the first act of barbarity under the Third Reich. This led to him joining a resistance group that smuggled money and endangered Jews out of Germany. Alerted to the fact that the Gestapo were on to him, and branded ‘an enemy of the State to be shot on sight’, he fled to England in 1937. Penniless and unable to speak the language, he moved into the home of a Major of the 9th Lancers on the army base at Tidworth in Wiltshire and over the following three years he became a successful businessman.

At the outbreak of war Frank suffered the injustice of being interned as an ‘enemy alien’. Resourceful and determined he became camp leader and campaigned endlessly for his and his cohorts release and to be allowed to join the British Army. He achieved both objectives in December 1940 and, rising to the rank of Captain, he served the Army with distinction for the rest of the war. Following Victory in Europe he was ordered to join the British War Crimes Executive and later the US Counsel for War Crimes. This led to him eventually being appointed Chief Interpreter.

From being unable to speak English in 1937, by the time the trials began in 1945 Frank was regarded to be the finest interpreter in the world, and he was directly involved in translating one third of the six million words spoken at the first trial. He also introduced the world to simultaneous translation, an innovation (now widely used every day in forums such as the UN and EU) that shortened ‘the enormously difficult proceedings’ by over three years.

On 1st October 1946 Hermann Goering, Commander of the Luftwaffe, Hitler’s designated deputy and architect of the Holocaust, became the first of twelve Nazis to learn from Frank that their fate was to be death by hanging. It is ironic that, having witnessed the Third Reich coming into being and committing its first atrocity, it should be Frank who brought the curtain down on the empire Hitler had boasted would last for a thousand years.

In total, almost 500 cases involving over 1,600 defendants were heard at Nuremberg and it was Frank, as an interrogator, who drew many admissions out of the accused that helped to secure their convictions. These included Bruno Tesch owning up to manufacturing and distributing the gas used in extermination chambers, and Otto Ohlendorf proudly confessing to ‘humanely’ killing 90,000 Jews with his mobile gas chambers. Of that last encounter Frank records: ‘There were days such as that when I had to drown myself in alcohol before I could sleep’.

For 28 months Wolfe suffered the emotional anguish of being exposed daily to the utter degradation of fellow human beings and of witnessing the abominations and depravation in Nazi camps. He then had the unenviable task of processing it all and explaining it in another language. Little wonder then that he left the trials with the parting words ‘I had heard enough about atrocities, mass murder, war crimes, extermination camps and genocide’.

In spite of this, and as related in The Undercover Nazi Hunter, Frank later risked his life again by going undercover in occupied Germany during the ‘Cold War’ where he single-handedly tracked down, arrested and took the ‘Confession’ of Waldemar Wappenhans – the Nazi General who had been earmarked to head the SS in Great Britain if Germany had been victorious. Wolfe’s personal war against the Nazis had therefore lasted from March 1933 until December 1949 when he handed the German General that he had captured over to the Admiralty.

Wolfe Frank’s qualities and achievements have categorized him as being a hero and one of the bravest figures of the twentieth century. Added to his good looks, intelligence service involvements, maverick tendencies, charismatic character and colourful private life (he was married five times and had countless affairs) many now see him as having been a real-life version of James Bond.

The memorial that I had the honour of unveiling in October ensures: these important historical matters will be remembered; that the service Wolfe gave to his adoptive country and the free world are appropriately recognized; and that he will no longer be seen as being ‘a wrongfully forgotten hero of the twentieth century.’

In short, the Blue Plaque is a fitting and lasting tribute to a former refugee who became the finest interpreter in the world. A man whose ‘superlative scholarship, administration and intellectual integrity’, as the Chief Counsel for War Crimes recorded, won him the unreserved praise of all who witnessed his magnificent performance on a world stage and who, as the plaque now records for posterity, was a major contributing factor in the undoubted success of ‘the greatest trial in history’.

The full story of Wolfe Frank’s astonishing life and achievements are recorded in Nuremberg’s Voice of Doom and The Undercover Nazi Hunter – further details of which can be found on Pen & Sword’s website or by clicking on Paul Hooley’s earlier P&S Blogs:

Whilst an interview Paul gave to Dan Snow for his ‘History Hit’ Podcast can be heard by clicking here. 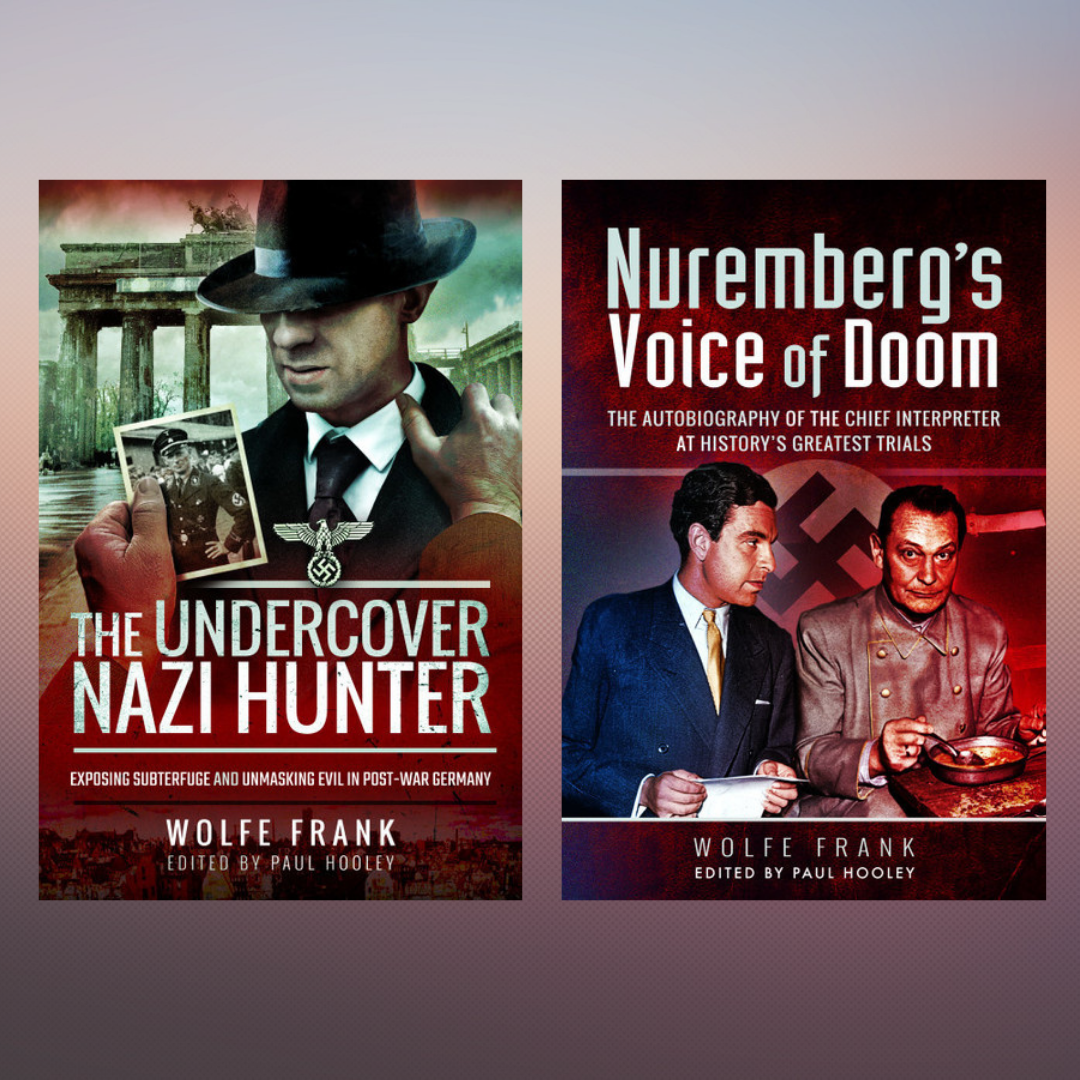