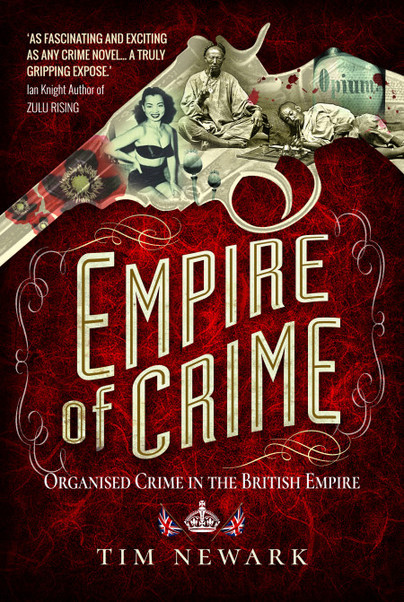 When the British Empire eventually banned its infamous export of Indian opium to China, it created a big problem for its colonial governors who had to look after millions of addicts suddenly denied their daily fix. In Empire of Crime, historian TIM NEWARK reveals that the Governor of Hong Kong, Sir Cecil Clementi, defied London to become the region’s biggest narcotics dealer.

Sometimes the best intentions can lead to the worst results. When Great Britain took the moral high ground and agreed to end its lucrative export of opium from Imperial India to China in 1908, it unleashed a century of criminality. Just as America’s misguided Prohibition of alcohol made illicit fortunes for the Mafia and other American gangsters, so organised crime within the British Empire grew rich on its trade in illegal narcotics in the 20th century.

Having succeeded in stopping the Indian Government from exporting opium throughout South-East Asia, there were millions of opium addicts, mainly Chinese, who demanded their daily fix. With Persian growers and dealers happy to step in and undercut colonial attempts to control the price of opium, the illicit trade was growing rapidly, giving greater power to the narcotics crime lords. The governors of the British Empire’s colonies were getting impatient for action and leading the discontent was Sir Cecil Clementi, Governor of Hong Kong,

‘If no effective opposition is offered,’ said Sir Cecil in 1927, ‘the position of the opium smuggler will grow daily stronger. The Hong Kong market is extremely desirable…”

Unless something was done and done quickly, Hong Kong was in danger of becoming the centre of a world trade in illicit drugs.

‘There is still enormous wholesale opium smuggling from South China,’ continued Sir Cecil, ‘for which Hong Kong is the natural port of shipment and through which the Colony is brought into disrepute.’

The situation was getting worse day by day because of the civil war raging in mainland China between rival warlords in the wake of the collapse of the Qing Dynasty, 1911. Chinese refugees were flooding into Hong Kong, raising the colony’s population from 600,000 to 900,000 and quadrupling the consumption of opium.

According to Sir Cecil, the reduction of opium consumption was quite impossible.

To bolster their war chests, the competing warlords were keen to exploit the money-making potential of the opium trade by growing and selling it. In order to defeat this wave of illegal opium threatening to engulf all British colonies in South-East Asia, there was only one answer Sir Cecil could think of. That was to become a dealer himself— the biggest dealer in the region. Sir Cecil’s daring idea was the result of a life spent in South-East Asia, dealing with the reality of gang life on the streets of British colonies.

More than anyone else, he knew the danger this posed to Britain’s ability to control the rapidly growing Chinese population in their colonies, and for that reason, he was willing to go further than any other governor and think the unthinkable.

To defeat the smugglers their empire of crime, Cecil wanted to buy large quantities of opium directly from Persia and dump it cheaply on his home market—putting the smugglers out of business at a stroke. To achieve this, he needed to buy 40 chests of opium a month from Persia, as well as 196 chests from India.

While he waited for official permission from London, Cecil embarked on his personal drug-dealing exercise by unleashing more legal opium on the market. Within days, government sales had quadrupled. Initial feedback seemed to justify his gamble.

He reported to London, “Steps taken in Hong Kong have now passed beyond the experimental stage and the fact that there is no sign of increased consumption to balance the increase in Government sales shows its success. In addition, the daily average of opium offenders in jail has fallen from 540 to 361, a very important factor in view of its chronic overcrowding.’

The governor’s policy seemed a miracle cure for crime. To carry on however, he needed further supplies of opium and asked permission to import more from Singapore while he awaited the influx from Persia.

Sir Cecil’s pre-emptory action caused a sharp intake of breath among the pen-pushers in Whitehall. At a secret Cabinet meeting, the disapproval of His Britannic Majesty’s Government was made clear.

Everyone now turned to Sir Malcolm Delevingne, Whitehall’s leading narcotics expert, to pick up the gauntlet thrown down by the rogue Governor of Hong Kong.

Delevingne’s position was that if they were to continue with Cecil’s campaign, Hong Kong would be committing itself indefinitely to supplying cheap opium to its consumers. As soon as any attempt was made to reduce the supply of opium in order to suppress the habit, the market would be invaded once again by cheap illicit opium from China. It seemed an unsustainable stance for Sir Cecil to carry on being the chief supplier of opium to his population. The British Cabinet were making it clear to Sir Cecil that they did not approve of his Hong Kong experiment.

Despite nearly precipitating a rift with London, Sir Cecil Clementi was certainly not alone in expressing discontent with Britain’s policy on restricting the export of Indian opium, and he remained Governor of Hong Kong until 1930. He was a modernising ruler, establishing Kai Tak airport, which continued in use until 1998. His obituary in the London Times described his period as Governor of Hong Kong as ‘a great success, especially in regard to the restoration which it brought about of Anglo-Chinese friendship.’ No mention was made of his attempt to become the biggest opium dealer in South-East Asia or his clash with his colonial masters.

You can order a copy of Empire of Crime here.