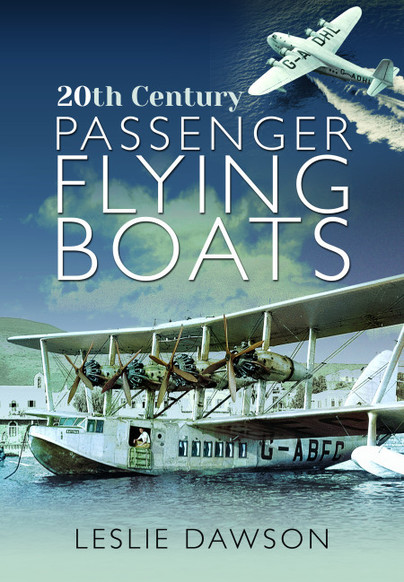 Add to Basket
Add to Wishlist
You'll be £19.99 closer to your next £10.00 credit when you purchase 20th Century Passenger Flying Boats. What's this?
+£4.50 UK Delivery or free UK delivery if order is over £35
(click here for international delivery rates)

From Henri Fabre's first successful take off from water and landing near Marseilles, to the introduction of a hull rather than floats by American Glenn Curtiss, to the world-wide development of huge, ocean-crossing flying boats on both sides of the Atlantic - the passenger flying boat era continues to fascinate aviation enthusiasts and historians alike. Wartime necessity for paved runways to support long-range, high flying land-planes and the faster movement of airmail, overcame in peacetime the unique ability enjoyed by such craft to economically utilise the natural waterways of the world, thus depriving passengers of the ability to enjoy the panorama unfolding below in luxurious accommodation and ease. A sadly missed epoch of flight: though related in clear and vivid detail by Leslie Dawson in his account of a pre-war Imperial Airways flight from Southampton to South Africa.

This extended pictorial edition of the author's previous book Fabulous Flying Boats, A History Of The World's Passenger Flying Boats provides a fast-moving journey from the first pioneers to the very last use of such craft in regions still reliant on waterborne communication with the outside world. From the Americas and the United Kingdom, to France, Germany and Italy, and on to Australia and New Zealand. Supported by world-wide private, public and corporate images, the work boasts a comprehensive and well-researched Appendix.

"A pleasant romp through the world of flying boats; enough to show what we’ve lost."

"An existing enthusiast would enjoy the photographs."

'....incredibly evocative. What is there is all 5 star material!'.

I enjoyed finding out more about this unique aspect of air travel that is unlikely to be repeated, but played such an important part in the development of commercial aviation.

Full of nostalgic illustrations from the period backed up by evocative commentary, this book concentrates a visual and verbal spotlight upon what, for the privileged few who experienced it, must have seemed an all too short career, yet one in which the reader can wallow from beginning to end of this beautifully-produced volume.

Leslie Dawson was born in Southgate, North London. An enthusiastic member of No 85 Squadron Air Training Corps, he first flew from Hendon, now the home of the RAF Museum. He went on to train Glider Pilots at Christchurch Gliding School, a prestigious Aviation establishment. Surrounded by planes for the majority of his working life, his enthusiasm and experience mean he is well placed to offer such a history. He is the author of Wings Over Dorset, a book depicting the county's aviation history. The success of this title secured the author a series of television interviews, including one with the BBC.