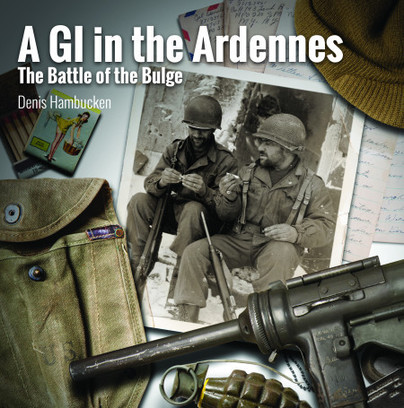 A GI In The Ardennes (Hardback)

The Battle of the Bulge

Add to Basket
You'll be £20.00 closer to your next £10.00 credit when you purchase A GI In The Ardennes. What's this?
+£4 UK Delivery or free UK delivery if order is over £30
(click here for international delivery rates)

A GI In the Ardennes focuses on the human experience during wartime. What was life like for a regular American soldier who gave his life to combat fascism?

By immersing himself in historical documents, hundreds of letters and several interviews from that period of time, Denis Hambucken managed to accurately reconstruct the daily life of an American soldier in impressive detail. The author takes a closer look at the weapons, equipment and personal belongings of the soldiers who fought at the Western front, while sharing numerous personal anecdotes and moving stories.

It is a different and interesting way of looking at the events of the Battle of the Bulge and what it meant for people to live/survive through some terrible days. Some of the topics it covers might easily be glossed over in any study or the battle whereas this one really does get down into the day to day necessities of living and fighting through a battle amidst severe weather. I think modellers, historians and re-enactors will enjoy this for the detail it provides, alongside the personal accounts of those who had to live through it all.

Denis Hambucken creates a book that is a joy for the eyes, which makes you smile for the happy stories and the character of the GI struggling with a war very far from home, which makes us think of the waste of human lives for a counteroffensive decided by Hitler almost at war ended and the German forces that never recovered from that defeat, which makes us wonder at the ingenuity or simply by the enormous productive capacity of the American forces. A book that is a must for anyone who wants to know well what was the epic of Bastogne and the Battle of the Bulge.

The book contains a number of interviews with the servicemen involved and their families, we also see lots of pictures of their kit, rations, vehicles, weapons, uniforms, paperwork and so much more. It really is a comprehensive and fantastic well written book that I found to be a brilliant read and one of the best so far this year. Congratulations to the author Denis Hambucken and the publishers Pen and Sword who have written and collected together a huge array of pictures and work that really does do a brilliant job. 5 stars out of 5. This book will definitely be read and re-read by myself.

Denis Hambucken is an author, photographer, illustrator and graphic designer with a passion for history. Originally from Belgium, and living in the United States, he regularly returns to the Ardennes, and travels across the United States to gather testimonies, documents and photos.