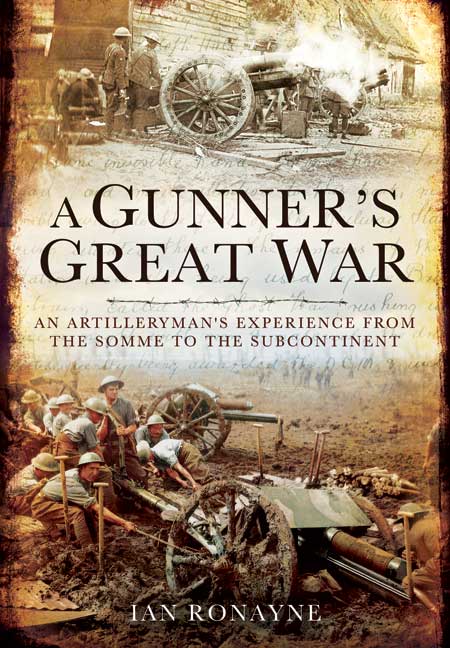 An Artilleryman's Experience from the Somme to the Subcontinent

Click here for help on how to download our eBooks
Add to Basket
Add to Wishlist
You'll be £4.99 closer to your next £10.00 credit when you purchase A Gunner's Great War. What's this?
Need a currency converter? Check XE.com for live rates

If the First World War had not happened when it did, Channel Islander Clarence Ahier would almost certainly have led a mostly unremarkable life. But it did, and in October 1915, aged just 23-years-old, Clarence left his home and volunteered to join the British Army. He would spend the next two and half years serving as an artilleryman on the Western Front.

Now this in itself is not remarkable - millions of other young men did the same thing. But Clarence Ahier did do something remarkable, and it was something to set him out from almost all his contemporaries. From the very beginning of his time at the front, he wrote a graphic and moving account of his experiences of war.

Clarence's ultimate plans for his meticulously written journal are unknown. But having lain unnoticed for years, it was recently discovered in a collection of dusty ephemera handed to a local history society.

The complete journal consists of around 25,000 words, with a focus on Clarence's experience during the Battle of the Somme, in the fighting around Ypres, and, after he was wounded for the second time, the journey to India and his time there as a member of the garrison. This will be supported by additional explanatory text.

This is a good account of an ordinary artillaryman's war which benefits from the perspective and research brought to it by Ian Ronayne.

What good fortune because not only was the story of Clarence Ahier saved and now made available, but Ronayne had provided much supporting text.

Book of the month

A Gunner’s Great War is a graphic and moving account of an artilleryman’s experience on the Western Front. An Interesting book for those who like artillery and WWI