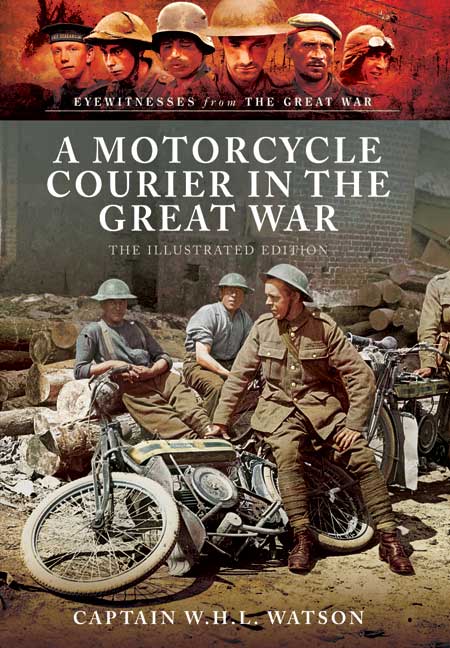 A Motorcycle Courier in the Great War (Paperback)

Add to Basket
Add to Wishlist
You'll be £9.99 closer to your next £10.00 credit when you purchase A Motorcycle Courier in the Great War. What's this?
+£4.50 UK Delivery or free UK delivery if order is over £35
(click here for international delivery rates)

W.H.L. Watson was a British Army, motorcycle despatch rider in the First World War. He saw active service during the key battles of 1914 and early 1915. Watson and his colleagues formed part of the Royal Engineers Signal Service and these riders were originally volunteers, some of whom supplied their own machines.

This amazing account details the experiences of these brave young men and provides a unique primary source account of life at the sharp end during the titanic struggles fought out in Northern France and Belgium.

Richly illustrated with contemporary photographs and maps, this evocative description of the actions of the British Expeditionary Force is a key source and is essential reading for anyone interested in the history of the Great War. Highly detailed, but nonetheless accessible this superb volume is greatly recommended for serious enthusiasts and casual readers alike.

Eye witness accounts of these early clashes are comparatively rare and Watson's wonderfully personal account provides a rare insight from an unusual perspective.

In a word, Watson's book is a must for the Garrison Library, but I hope that future reprints in this series give more thought to what a good modern edition should be

An interesting and engaging read that I have no hesitation recommending to anyone wanting to find out more about this early volunteer unit.

An interesting and unusual account provides a unique primary source.