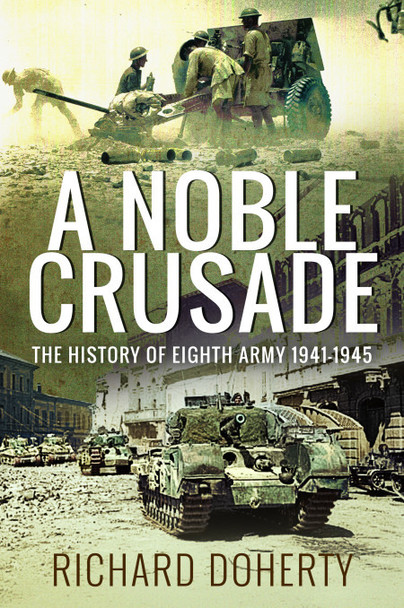 Add to Basket
Add to Wishlist
You'll be £16.99 closer to your next £10.00 credit when you purchase A Noble Crusade. What's this?
+£4.50 UK Delivery or free UK delivery if order is over £40
(click here for international delivery rates)

Eighth Army was formed in Egypt in September 1941. A year later, under Montgomery, it defeated Rommel’s Panzerarmee Afrika at El Alamein which led to the victorious end of the North African campaign at Tunis in May 1943.

The controversial landings in Italy in September 1943 followed the short Sicilian campaign. Tenacious German resistance, exemplified by the protracted Monte Cassino battle during the first half of 1944, made the Eighth Army’s advance north testing and costly. In April 1945, Eighth Army, now commanded by General Dick McCreery, brilliantly attacked into the plain of Lombardy overcoming the last Nazi defensive lines in Italy.

No less than thirty-four Victoria Crosses were awarded to soldiers of Eighth Army who were drawn from every Empire and Commonwealth country, including neutral Ireland, and nations such as Poland occupied by the Nazis.

Drawing on official records and personal accounts, A Noble Crusade, first published in 1999, is a superb and comprehensive history of the most famous British military formation of the Second World War and, arguably, of all time.

One of the premier military units in the Second World War was the British Eighth Army. Created in Egypt in September 1941, the Army fought most famously in North Africa evicting the even more famous Rommel by 1943. The Army went into Sicily, going more head-to-head with the U.S troops under George Patton than the Germans, then on to Italy, where it moved northward over the next two years in relative obscurity until the end of the war. Most histories that involve the Army focus on North Africa and Sicily – given the wonderful personalities like Montgomery, Patton and Rommel, who can blame them. Author Richard Doherty has taken a different approach, following the Army from its inception to its final battles, in A Noble Crusade: The History of the Eighth Army 1941-1945. (Penn & Sword, 2020)

Doherty actually starts his history a bit before the Army was created in order to place said creation in the context of the time. Much of his discussion of the Army’s time in North Africa will be familiar to most students of World War II as - with the exception of the set piece battle of El Alamein – the images of swirling tank battles, long retreats and advances are far more interesting that a slog through mountainous terrain that was Italy. The author doesn’t just give you a dry discussion of “this happened, then this happened;” he discusses the planning, the events and, more importantly the aftermath, including the leadership squabbles. He comments for example, that Montgomery was unhappy with the pace of his armored groups at Alamein, mostly because he really didn’t understand what armored groups could and couldn’t do.

For me the book started to shine when Eighth Army leaves Sicily and enters Italy – where the 3rd Canadian brigade had to fight off a monkey and puma from Reggio’s zoo that the pre- invasion bombardment had set free. (pg 143) The view that I (and probably a lot of readers) had of the Italian campaign was frontal bludgeoning of strong German defenses on the Volturno, Barbara and Gustav Lines and the failed strategic assault at Anzio. But the campaign also had its own “swirling” battles, such as the counterattack by 16th Panzer near Termoli.

Another highlight for me was the fact that Doherty included, in the overall discussion of Brigades and Divisions, the individual stories of the Army’s Victoria Cross winners, such as Canadian Major John Mahony whose company held off intense German counterattacks for five hours protecting the bridgehead over the Melfa River. The author adds the Eighth Army’s order of battle at various times in this long campaign. That, added to a good bibliography for further study and photographs of the personalities and wartime scenes, provides a well-rounded book. A few more maps of the Sicilian and Italian campaign would have been nice, to better follow some of the narrative.

Overall, Doherty has penned an excellent book that captures the actions of a great military organization that includes its known and lesser known achievments.

Montgomery's Eighth Army and the Desert Rats are the stuff of legend and this book re-tells their story. There is an index, there are chapter notes, appendices, a bibliography; all the necessary finding aids that you would expect in a book of this kind which is one to be dipped into rather than read cover to cover.

This must be the definitive account of the Eight Army in North Africa, Sicily, and Italy. This is a comprehensive history of the Eight Army from its formation in 1941, through to the war end in 1945 . – Most Highly Recommended

What we have here is a superior read full of detailed information and facts, culminating in a fantastic book indeed. I have said previously that books need to be written about every regiment or military arm of power, in order to celebrate their history, work and successes. This book is a fine read and looks at it from beginning to end during WWII. Or moving across Northern Africa to El Alamein through to working their way up through Italy. The book is rich in information, detail and stories about both Rommel and Montgomery. Credit should go to the author Doherty who has written a great book which has a wealth of information and this really shines through. There is a great appendices and bibliography at the end of the book. A definite must for anyone interested in this subject.

If you're interested in a good history of the legendary British WW2 formation then this is a great way of reading it all in one place.

I was excited to read this book as I’m building an 8th Army and LRDG army for Bolt Action. My hope was this book would provide a lot of background info for my planned army. I wasn’t disappointed, the book provides a great depth of detail regarding the desert war as well as the European campaign...

... Anyone looking for a book with detailed researched information on the background of the Eighth army should take a look at this book.

Anyone who has an interest in military history will also not be disappointed by this book, its an easy read and a good starting point for reading more about the North African Campaign.