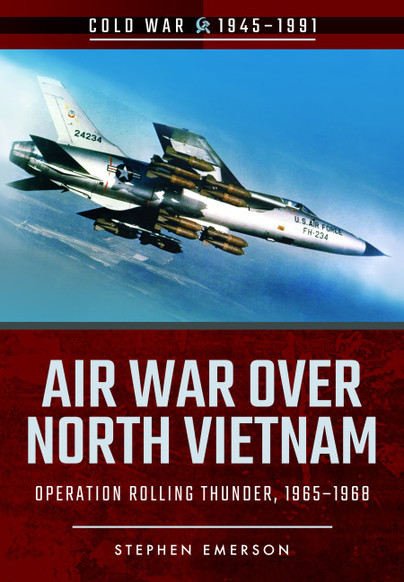 Add to Basket
Add to Wishlist
You'll be £14.99 closer to your next £10.00 credit when you purchase Air War Over North Vietnam. What's this?
+£4.50 UK Delivery or free UK delivery if order is over £35
(click here for international delivery rates)

In early 1965 the United States unleashed the largest sustained aerial bombing campaign since World War II, against North Vietnam. Through an ever-escalating onslaught of destruction, Operation Rolling Thunder intended to signal America’s unwavering commitment to its South Vietnamese ally in the face of continued North Vietnamese aggression, break Hanoi’s political will to prosecute the war, and bring about a negotiated settlement to the conflict. It was not to be.

Against the backdrop of the Cold War and fears of widening the conflict into a global conflagration, Washington policymakers micromanaged and mismanaged the air campaign and increasingly muddled strategic objectives and operational methods that ultimately sowed the seeds of failure, despite the heroic sacrifices by U.S. Air Force and Navy pilots and crews

Despite flying some 306,000 combat sorties and dropping nearly 650,000 tons of ordnance on North Vietnam – more than that used in the Pacific theater during World War II – Operation Rolling Thunder failed to drive Hanoi decisively to the negotiating table and end the war. That would take another four years and another air campaign.

Stephen Emerson does an outstanding job of outlining the complicated flashpoint of Vietnam that lasted for more than 30 years and culminated with the height of the Vietnam War. In 1965, the US sent 3,500 Marines ashore at Da Nang, South Vietnam, which would be the tipping point for US involvement—an involvement we tried to tiptoe around for many years. Ultimately, the US would be in Vietnam for the next 10 years, escalating involvement and testing American airpower.

Maps depicting the emergence of French Indochina in the 19th and 20th centuries and Vietnam in 1964 when in August two incidents in the Gulf of Tonkin saw the US commit to retaliation against the North Vietnamese. The US military and government prevaricated over different strategies – the concept of bombing North Vietnam to seek a peace saw the launch of Operation Rolling Thunder on 2 March 1965. Micro management by the White House virtually hamstrung the military commanders on the ground with key targets being put off limits, and numbers of aircraft and sorties being restricted as well as the calling of temporary cessations of the bombing. Despite the US inflicting considerable losses on North Vietnam through 300 000 sorties dropping in excess of 600 000 tons of bombs for the loss of almost 700 pilots and over 900 aircraft up until 31 August 1968, the North did not flinch politically.
With a comprehensive glossary, a timeline from August 1945 to March 1965, additional maps, photographs of key players and incidents, a colour insert of aircraft, the almost journal-like narrative is an excellent account of Operation Rolling Thunder. Emerson has well documented his work with excellent Notes and a lengthy bibliography.

If the Vietnam conflict is something that appeals to you - or if you're keen on Air Combat in general - you will definitely find something to captivate you in this book. Personally, I have an avid interest in the Vietnam Conflict and I learnt a few facts I didn't know, which is pretty much the best thing I can say about any book.

At just under £15 it won't break the bank and is one of those books you can pick up and have a browse through, or use as a reference: I recommend it.

As a new Air Force ROTC cadet in 1974, I was educated and led by a staff of officers with multiple tours in Southeast Asia flying missions in support of the war in Vietnam. Our detachment commander was an RF-101 Voodoo pilot who had been shot down twice outside of Hanoi and rescued the same day each time. We knew in theory, how dangerous it was to fly missions in this war, but our staff was a quiet and modest group and didn’t talk in detail about the risk involved. We had no idea how much bravery it took to fly these missions day after day with the losses that were experienced until authors started writing about it in detail after the war ended. Many of these works dealt with individual battles, a specific service, and specific areas of operations.

Emerson’s new book draws from many of these earlier works and goes even further by pulling it all together with the research he did at several U.S. Navy and U.S. Air Force museums and archives, as well as the LBJ Library. What makes Steve’s new book so valuable is that it brings the reader from the highest levels of decision making including President Lyndon Johnson and Secretary of Defense Robert McNamara, to the Joint Chiefs of Staff, to the theater commanders, and then right down to the crews that executed the missions. He gives us the “why” behind Johnson’s micromanagement of the war, the limits he put on targeting, and the results that were produced. He describes the political climate in the United States and how that affects Johnson’s decision making. Emerson does a superb job of describing the capability of the weapon systems, as well as the aircrews at the beginning of Operation Rolling Thunder and describes how these improve over time for the United States. He also describes in great detail the capabilities of the North Vietnamese People’s Air Force and how they evolved during the period of operations. In the end, the book discusses the results that were produced from the over three and a half years of concentrated air operations.

I strongly recommend Emerson’s book to everyone from military member, to policy maker, to anyone interested in history. As always, there are lessons to be learned that can be applied to present conflicts as well as those in the future.

This short, but excellent book, looks at both the military campaign and the underpinning political one, with plenty of photographs to illustrate the fighting in the air.

A hot and interesting topic.