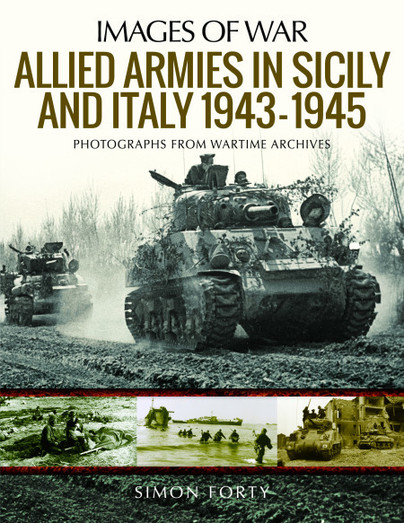 Click here for help on how to download our eBooks
Add to Basket
Add to Wishlist
You'll be £4.99 closer to your next £10.00 credit when you purchase Allied Armies in Sicily and Italy, 1943–1945. What's this?
Need a currency converter? Check XE.com for live rates

The Italian campaign was one of the most debated of the Second World War, splitting the American and British allies, and causing great disharmony. After the fall of Rome and the surrender of Italy, the invasion of Normandy led to the Italian campaign becoming a sideshow as the ‘D-Day Dodgers’ fought their way through Italy to the Alps against a grinding defence and extreme weather.

In a sequence of 200 wartime photographs Simon Forty sums up the major events of the conflict – from the landings on Sicily to the crossing of the Po. Commanded first by Sir Harold Alexander and then Mark Clark, the Allied armies (US Fifth and British Eighth) drew men not only from Britain, the United States, France and Poland but from all over the Commonwealth – from Australia, Canada, India, New Zealand and South Africa – as well as such other countries as Brazil, Czechoslovakia, Greece and Palestine.

The devastation caused by the war in the cities, towns and countryside is part of the story, but perhaps the most powerful impression is made by the faces of the soldiers themselves as they look out from the Italian front of so long ago.

Simon Forty's Allied Armies in Sicily and Italy 1943-45, is a library of photographs and story line, depicting the British and American men and armour, at war. A great book, when one has a moment, to sit down and savour the pictures. It's a book which one can pick up again and again, and experience that moment in time.

Overall, a really great collection of images and highly recommended to modellers wanting to begin an Italian campaign- themed project.

Another addition to the very popular Images of War series, with a mass of outstanding and rare images. The author covers campaigns in Sicily and Italy as the Allies slogged their way North, using amphibious and airborne assault to bypass the German lines – Very Highly Recommended

The text offers a decent overview of the two years to supplement the photographs, which offer plenty of detail for modelers and creators of vignettes. Most come from the US Army, British, and Canadian archives. Collectively, they offer a nice selection of the multinational Allied force that slogged up the Italian peninsula. Enjoyed it.

The Images of War books rely heavily on photographs accompanying the text to tell a more complete story. Forty gets the balance right in this edition, particularly in showing the nature of the terrain and the conditions under which the campaign was fought. The photos also make it clear the Allies did not have it all their own way. Both the photos and the text give due weight to the multinational force on the Allied side with not just the British Commonwealth forces and Americans, but Poles, Greeks, Brazilians, and other contingents playing their part.

This title as part of the Images at War series is a good addition to the series and covers an aspect of World War 2 that tends to play second fiddle to D-Day. The images are a great mix of preparation, in action and at rest. The text despite its limitations is well written and provides a good backdrop to the photographs that are made extremely valuable due to the captions that accompany them.

As featured on Traces of War

This book is supported by many photographs and maps and of course first class text describing the events as the troops marched into various broken towns. As usual in these ‘Images of War’ books the photographs are of a high standard and really do comprehend the harshness and weariness of battles that was encountered from both sides. As usual this book is excellent and will be one of the more popular books in the series and rightly so. I would highly recommend this book to anyone.

The Campaign of Italy, often snubbed by the mainstream media, was a tough and bloody campaign, which saw the clash of forces from many nations, including in addition to Anglo-Americans and Germans, Italians (on both sides), New Zealanders, Canadians, Poles, Greeks, the Jewish Brigade, the French with their colonial troops, the Brazilians. At the same time, the civilian population suffered a lot (as my father loved to tell me - he most likely saw many of the soldiers who passed from Cassino going back to Rome) both hunger and problems related to the war, but even real barbarism like those of the Moroccans of the CEF and more to the north the massacres of the SS in retaliation for the attacks of the partisans. Those among the allies who fought in Italy were called "DDay Dodgers" because for many the real war was in Normandy, but nevertheless as this book shows with its splendid photos, the ground in Italy was an equal if not often more fearful enemy than Germans and those who fought in Italy do not deserve to be forgotten even if the campaign did not go, finally as foreseen at the beginning.

All in all a very good book with tons of interesting photos and providing a concise and useful timeline of the entire Italian campaign. I use it as an indispensable addition to my other books about the Italian campaign which provide more in-depth details on certain parts of the period.

It is a neat addition to the Images of War series, and puts some focus onto a campaign that cost so many lives in the liberation of Europe. The troops in Italy were sometimes known quite unfairly as the D-Day Dodgers, and this does a good job in helping set the record straight. My own father returned home to the UK in June 1944, having been away in North Africa since 1940. He went on to land in Normandy on D+26 and he went on across NW Europe into Germany in 1945. I am quite sure he would have been interested to see this one, had he still been with us.

Having guided these battlefields, it is clear that this book is both an excellent introductory narrative of the events in Italian Campaign and is well supported by very good images. In all a good starting point for anybody interested in the campaign.