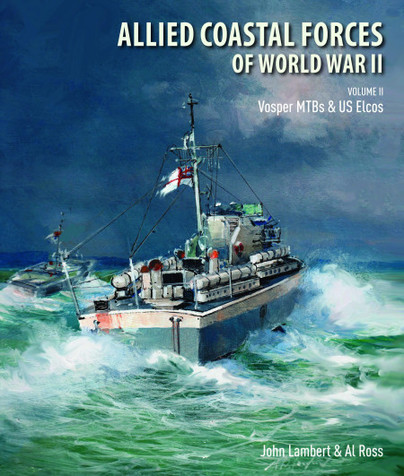 The major contribution made by Coastal Forces to the Allied war effort has had surprisingly little coverage in the literature of the Second World War. Motor torpedo boats, PT boats, motor gunboats, launches and submarine chasers served with distinction throughout the war, and in every theatre. They performed invaluable service as patrol boats, convoy escorts, minelayers and minesweepers, harbour defence vessels, light landing craft, RAF rescue boats and transports for agents and clandestine missions.

This second volume covers sixteen Vosper MTB designs and the US 70ft, 77ft and 80ft ELCO designs. US-built Vosper designs supplied under lease-lend are also covered, while weapons systems and machinery are dealt with in detail. Some 700 finely detailed drawings were drawn by the authors for this second volume in their highly acclaimed two-volume work.

The authors, firmly established as the recognised authorities on small warships, unearthed a remarkable body of information now included in this major work, and their finely detailed drawings, redrawn form original builders’ plans, offer an unparalleled view of all these remarkable designs. The new and redesigned editions of their work will be welcomed by naval enthusiasts and modellers alike.

Volume 2 of Allied Coastal Forces in World War II will appeal to readers interested in motor torpedo boats used by the British and Americans in coastal warfare at sea and those building smaller scale ver- sions of these interesting craft. Many of these miniatures are ideal for playing naval war games.

It is a fascinating and very revealing read which definitely justifies the price of the
Volume. The authors have written a Volume to be very proud of and it covers the
subject very well.

This also is a must have book for anyone interested in coastal warfare and a great companion to Volume 1. There is nothing I can think of that is really missing from this coverage.

Over 250 pages packed with an amazing level of detail and a degree of research effort from both authors, that can only be admired. Anyone with an interest in Coastal Forces, veterans, historians and modellers, and I suspect even some boatbuilders and those restoring any of these old boats will find this of interest. This is a book I think should really be on your reference bookshelf. I can't recommend this one highly enough.

Being a large-format book, both the illustrations and plans/drawing[ which represents John Lambert at this best] are clearly and crisply printed on semi-gloss paper, so that the details stand out, assisted by extensive, information captions.

What I really liked about this book though are the pictures. You can tell so much from a picture, far more than words alone will ever tell you. I’d only seen a few of the pictures before, which is a little surprising when many of them are from The Imperial War Museum, a source that I’ve regularly raided over the years: others are from factory sources, the USN and private collections... All in all, a truly fascinating book.

For modellers, boat construction historians and those who simply like big fast boats in action ‘Allied Coastal Forces’ Volume 2 is a must have book.

This is not a book just to be read but to be owned. A quality publication in a large format, 290mm by 240mm, with over 250 pages packed with technical drawings, photographs and engaging text. Some publicity blurb says it would help anyone wishing to build a model but for some of the boats little more would be needed to build to full size craft such is the detail given.
Although it may look like a technical tome written only for experts, and it fits that role very well, it would also delight any general reader with an interest in naval development. So much extra is covered around the development and construction including the politics and finance under the Lend Lease arrangements, in a brief review it is difficult to do the book justice. The joint authors massive research has resulted in the listing of every boat built and its eventual fate, including a chapter about the ones which still exist in museums or as houseboats.

We cannot recommend this book too highly.

This is a book not to be missed and the companion Volume I, covering Fairmile and US Submarine Chasers, is equally important.

AL ROSS II is the author of several books on small warships and since the 1980s has been producing a series of plans for modellers of small combatants of the Second World War and Vietnam eras. He lives in Bangor, Maine, USA.