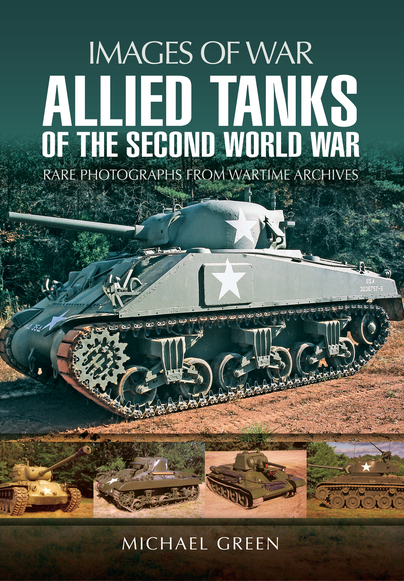 Click here for help on how to download our eBooks
Add to Basket
Add to Wishlist
You'll be £4.99 closer to your next £10.00 credit when you purchase Allied Tanks of the Second World War. What's this?
Need a currency converter? Check XE.com for live rates

Expert author Michael Green has compiled a full inventory of the tanks developed and deployed by the Allied armies during the six year war against Nazi Germany and her Axis partners.

There were four categories of tank: Light, Medium, Heavy and Super Heavy. Combat experience proved Light tanks (such as the Stuart and T-26) to be ineffective. Medium tanks (the US M4 series, named Sherman by the British, and Russian T-34) soon dominated with their fire power, protection and mobility.

The later stages of the War required the Allies to answer the Axis Panther and Tiger tanks with up-gunned and up-armoured second generation M4s, T-34-85s and the Sherman Firefly. Totally new heavy tanks such as the M-26, Pershing, Soviet KV-1 series and the British Centurion only saw action in the final months.

Allied Tanks of the Second World War covers all these categories in detail as well as the few super heavy tanks such as the French Char 2C and the TOG. For an informed and highly illustrated work this book has no comparable rival.

The Images of War take on tank history is, as one would expect, rich in photographs, both black and white from the past and color from contemporary armor museums. The result is that both tank buffs and modelling accuracy mavens will find all or most of the detail they could want about these vehicles. Michael Green’s accompanying text teaches readers the design concepts behind each tank.

For myself, the images came in handy as I recently built two early-war French tanks, the R35 and H35. RPM’s instructions are, unfortunately, small and not entirely clear, so it was extremely helpful to be able to refer to photos of the running gear and main guns, for example. Furthermore, it enhances my experience of building the models to know more about the tanks they represent.

This is a somewhat surprising book, because although one expects it to have excellent photographs, and most are quite new to this book, I did not expect such a good written description of the tanks described, their development and combat use. It covers not only those well known, but also tanks under development and some intended for WW2 but which did not make it into combat. I was very pleased with this volume as it presented quite a bit of new information and data that was very useful. For those with not a lot of tank references, this volume may fill in some of the holes in older books, where only bare technical information was provided, without the extra chit chat this author engages the reader in. I had opened it expecting one of those skim through coffee table books with perhaps a bit of data, but was surprised to find it was anything but that. The author does not only point out breakdowns, and general construction problems with many tanks, but their finer points too. I liked this book.

The "Allied Tanks of Second World War" is another new title by military historian Michael Green. In this book, he compiled a history of the tanks, developed, produced and used by Allied forces against Nazi Germany and other Axis countries. Since the war continued for six long years, the line up of the vehicles in this well-illustrated volume is really impressive.

The Second World War changed how tanks were deployed on the battlefield, which displayed the need to have specialized tanks - scout tanks, infantry support tanks, amphibious tanks, etc. Besides the usual criteria of combining armor, firepower, and maneuverability, the tanks now had to be easily manufactured, serviced and repaired in the field. Before the 1940s some of the tanks were almost handcrafted one at a time. The unification of designs, as well as assembly lines similar to car manufacturing, was a great way to increase production numbers.

This was one of the main advantages the Allied tanks had over the Axis', and especially Nazi Germany's tanks. Even being technologically more advanced, such tanks as the Panther or Tiger were too iabor intensive. They took too long to produce and were too complicated to maintain or repair in the field. To compete with thousands and thousands of American M4 Sherman and Soviet T-34 coming off assembly lines was close to impossible. Just like in the "Axis Tanks," the content of this book is broken into four chapters based on the classification of tanks: a chapter on the light tanks; two chapters on early-war and late-war medium tanks; and a final chapter, dedicated to heavy tanks. Each chapter traces the. history of each particular category starting in the 1920s-1930s and continuing until the end of the war. A small but fair amount of attention given to odds and
ends, such as the Soviet SMK tank or British TOG.

Obviously, one can't fit everything about this subject into a single 200-page volume. Just the tanks like the Soviet KV or American M3 or M4 series require big volumes of their own. Nonetheless, this affordable and highly illustrative work can appeal to scale model builders, WWII buffs, collectors and even wargamers.

This is a fine pictorial study that will appeal to modellers, re-enactors, equipment collectors and armour historians alike.

Modelers will enjoy viewing dozens of color and camouflage schemes along with fascinating and useful detail shots, including overhead and several interior photos.

Overall, the volume is an interesting combination of old and new imagery detailing both common and rare tank designs.

An excellent source for one who knows not too much about the allied tanks yet, but also a great source for scale modelers.

Once again this is a great book for tank modelers. It is also a good 'starter book' for someone who doesn't know much about the Allied armor in World war II, but wants to learn.

This is a very detailed and illustrated book that will be of great interest to modelers and military historians alike.

For an informative and highly illustrated work this book has no comparable rival.

The fine selection of images and the clear text very effectively describe the design and deployment of Allied armour.

The variety of tanks featured in the book are not only the well known ones which saw extensive combat service, but also a number of the experimental types, built as prototypes or in very small numbers but still interesting to see included. The museum examples are spread around various countries, from the USA, the UK, Belgium, France, Finland and Russia. One of the elements I found particularly interesting were the 'Dead Ends' of the Heavy Tanks section, when various designs got no further than prototype builds. These include things like the American T28 and the British Tortoise, TOG 1 and 2. I liked the inclusion of the modern colour images that show the wide variety of WW2 tank types that have been kept in museums and are therefore accessible for us to see today.