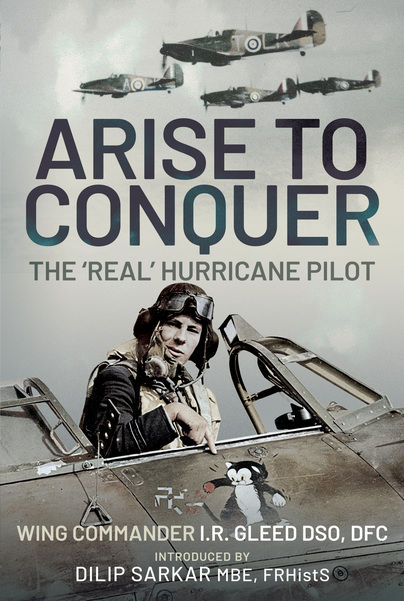 Add to Basket
Add to Wishlist
You'll be £17.50 closer to your next £10.00 credit when you purchase Arise to Conquer. What's this?
+£4.50 UK Delivery or free UK delivery if order is over £35
(click here for international delivery rates)

Born in 1916, after learning to fly as a civilian, Ian Richard Gleed was granted a RAF commission in 1936. He completed training on Christmas Day that year, being posted to 46 Squadron which was equipped with the Gloster Gauntlet.

Through much of his RAF service the diminutive Gleed was known as ‘Widge’, short for ‘Wizard Midget’ on account of his excessive use of the word ‘wizard’ to describe something ‘topper’, and his short stature. Rising from Flight to Squadron Commander in short order, and later taking over the Ibsley Spitfire Wing in 1941, Gleed was enormously popular with his peers. Indeed, Wing Commander ‘Bunny’ Currant once described Gleed as a ‘pocket-sized man with care for others and courage beyond compare’.

Having been decorated with the coveted ‘double’ of both DSO and DFC, Wing Commander Gleed went out to lead a wing in Tunisia. It was there that he was shot down and killed on 16 April 1943. By this time, he had achieved the status of being a fighter Ace, having been credited with the destruction of thirteen enemy aircraft.

The previous year, Gleed’s wartime memoir, Arise to Conquer, was published by Victor Gollancz. Eloquently written and detailed, this book is a superb first-hand account of one man’s life and times as a fighter pilot – mainly flying the Hawker Hurricane – during the Fall of France, the Battle of Britain and beyond into the night Blitz.

Reprinted here in its entirety, and extensively introduced by the renowned aviation historian Dilip Sarkar MBE, FRHistS, this edition of Arise to Conquer is supported by a remarkable set of wartime images. Among Gleed’s Hurricane pilots on 87 Squadron during the Battle of Britain and beyond was Sergeant Laurence ‘Rubber’ Thorogood, a keen photographer who is often mentioned in this book. Along with his Commanding Officer’s words, Rubber’s unique personal photograph album, containing as it does a number of images of Gleed, provides a rare glimpse of a fighter squadron at war during our Darkest – yet Finest – Hour.


This was a really good book to read, a book about a group of Hurricane pilots during WW2, their lives, training, flying and everyday life from a first-hand account, by Wing Commander I. R. Gleed DSO, DFC. In a way this a great history book because it tells the stories and daily experiences of the ‘man’ on the ground doing the job.

A great biography regarding one of the great pilots for the RAF during WW2. The story is full of action and full of great stories about the pilots and the ordeals they endured. A must read for the air enthusiast.

A marvellous, well-written first hand account of a war hero and his air force colleagues that I was previously unaware of. It is an enthralling page turner from start to finish, and provides a timeless poignant snapshot of how Britain was just before WW2 up to the middle of the war. Not only does it detail the true diary of the brave men who fought against seemingly insurmountable odds in Spitfire and Hurricane squadrons and somehow succeeded, but also gives in an insight into the lifestyles of young ex-public / grammar school boys who lived each day to the max because they were never sure whether it would be their last. This book should appeal to military historians as well as anyone interested in the social history of Britain in turbulent times.