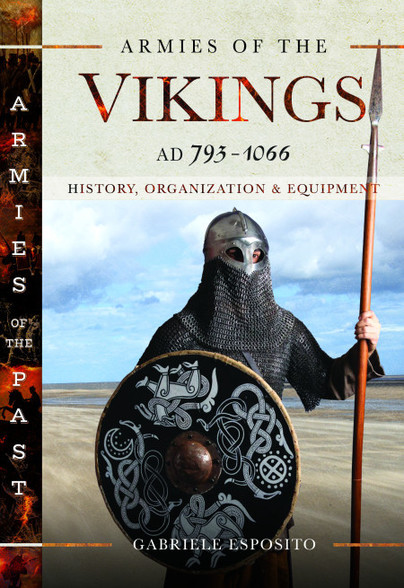 Click here for help on how to download our eBooks
Add to Basket
Add to Wishlist
You'll be £4.99 closer to your next £10.00 credit when you purchase Armies of the Vikings, AD 793–1066. What's this?
Need a currency converter? Check XE.com for live rates

An enjoyable exploration of the Vikings, packed with easy-to-digest information for both the Viking enthusiast and those who are marginally interested in learning more about them.

Exploring the military history (AD 793-1066) of the Vikings, this accessible work of nonfiction examines their global impact including key campaigns, battles, and warriors. Of particular note is the use of high quality color photographs of re-enactors and emphasis on strategy, tactics, weapons, armor, and clothing.

A supposed descendant of mighty Vikings, particularly Erik the Great, I am always curious and interested in historical research related to Vikings. Armies of the Vikings, AD 793–1066, did not disappoint! The content is informative and brings these warriors to life. The explanations of their plights, reasons, and rationales for some choices were helpful. I love that it covers a lot of land and it written in a way that non-academics can enjoy. Saying that, the images were vivid and stunning and can hold the attention of any reader. I appreciated the re-enactors bringing these warriors to a contemporary audience.

Any book about Vikings is pretty much guaranteed to get at least 4 stars from me. "Armies of the Vikings, AD 793–1066" managed to get the top rating by bringing Viking armies to life. I almost expected to see a couple of Vikings charging through my living room! It's written in a style that makes it easy to read, it's entertaining, and the photos are an added bonus. Great stuff!