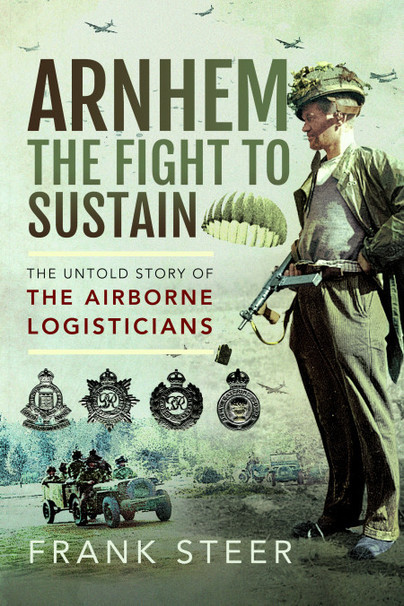 Arnhem: The Fight To Sustain (Paperback)

The Untold Story of the Airborne Logisticians

Add to Basket
Add to Wishlist
You'll be £15.99 closer to your next £10.00 credit when you purchase Arnhem: The Fight To Sustain. What's this?
+£4.50 UK Delivery or free UK delivery if order is over £40
(click here for international delivery rates)

On the ground the airborne logisticians at the battle of Arnhem fought to the bitter end, indistinguishable from their paratroop comrades. In the air, their deeds and sacrifice were shining examples of duty done under the most desperate circumstances. Witness the account of Flight Lieutenant H J King, navigator of Dakota KG 374 of 271 squadron RAF, Down Ampney: These men were not volunteers like aircrew. They received no flyingpay, yet were, without doubt, superb in their fulfilment of duty even though KG 374 was burning for the whole period over the dropping zone.

Arnhem - The Fight To Sustain tells the stirring story of the men and the methods employed in sustaining 1st Airborne Division. It is the first account of forming corps of today's Royal Logistic Corps in action together. Following extensive research the story draws heavily on contemporary documents and eyewitness accounts and is lavishly illustrated.

"The book is enriched with personal stories of the soldiers in combat...thoroughly recommended to those with an interest in airborne or logistic operations. It would also be useful to those who want to build accurate dioramas of the equipment's used during this airborne operation."

..engrossing, informative and focuses on a rarely studied aspect of airborne combat. Highly recommended for readers with an interest in parachute operations in the Second World War.

A most interesting account of Arnhem from the perspective of the Royal Army Service Corps and the Royal Army Ordnance Corps. The book begins with a description of their role within the 1st Airborne Division; the organisation of their units, equipment used and supplies that they were expected to render. Then comes a day by day account of the battle, with the logisticians initially plying their unglamorous trade against the background of an operation that had not yet gone awry, then, as the situation became desperate, taking their place in the thick of the fighting. Frank Steer also discusses the wider aspects of the battle, from the supremely courageous work of the RASC Air Despatchers on the resupply flights, to the progress of the 1st Airborne Division's Seaborne Echelon, following in the wake of the 2nd Army.