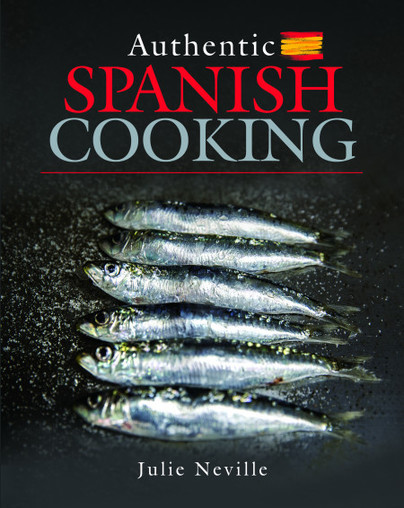 As featured in Hello! magazine: Julie Neville opens up about her family life as she unveils her new Spanish cookery book

You'll be £20.00 closer to your next £10.00 credit when you purchase Authentic Spanish Cooking. What's this?
+£4 UK Delivery or free UK delivery if order is over £30
(click here for international delivery rates)

Up until three years ago I was confident that I had experienced true Spanish cooking bringing together the many flavours of the Mediterranean – and its health benefits too. I had holidayed many times in this incredible country and sampled many traditional dishes and there are numerous lovely Spanish restaurants emerging all over the UK now too.

Moving to Spain in 2015 made me quickly realise that I had not even scratched the surface and that the types of foods the Spanish eat, when they eat, their cooking methods and their use of herbs, spices, oils and locally produced foods was so incredibly different to anything I had tasted or experienced before.

My quest to learn as much as I could during my time in Spain about their food and culture resulted in me working in a wide range of incredible restaurants, some Michelin Star with award winning chefs and others only the locals would know where the grandmother is still cooking her famous recipes in what was her original house 60 years earlier. Some in the city, some by the beach and others hidden in the mountains.

Collaborating with many of the restaurants in which I worked, I have now brought to you Authentic Spanish Cooking which shares the recipes of restaurant quality food that you can easily recreate in your own home using traditional ingredients and methods. With each restaurant we have provided their most popular dishes including a starter, main course and dessert.

Exclusive interview and photos: On winning form in her magnificent mansion Julie Neville tells of life with football legend Phil and her recipe for keeping their home team happy

Julie Neville is the wife of footballer, TV Commentator and now Women´s National team football manager Phil Neville. Well known for her love of health and fitness and author of “Superfoods – How to make them work for you”, Julie has always had a passion for cooking. After the family's move to Spain in 2015 for Phil to work at Valencia Football Club, Julie was captivated by the Spanish culture, their love for food and cooking and their use of fresh local ingredients. This resulted in her working in a wide range for Spanish restaurants for two years and the creation of her latest book “Authentic Spanish Cooking”. Now relocated in the UK but keen to share all that she has learnt.