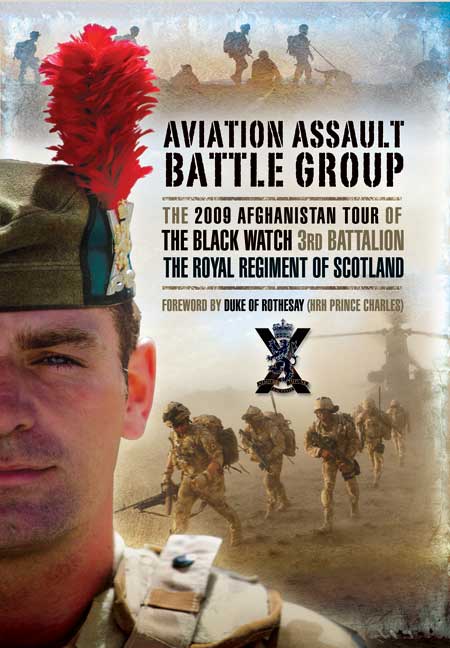 The 2009 Afghan Tour of The Black Watch, 3rd Battalion The Royal Regiment of Scotland

Add to Basket
Add to Wishlist
You'll be £30.00 closer to your next £10.00 credit when you purchase Aviation Assault Battle Group Afghanistan. What's this?
+£4.50 UK Delivery or free UK delivery if order is over £35
(click here for international delivery rates)

The Black Watch, 3rd Battalion The Royal Regiment of Scotland Battle Group deployed on Op HERRICK 10 to Afghanistan for six months during the summer of 2009. Its role was that of Aviation Assault Battle Group and its main task was raiding into insurgent-held areas in both Helmand and Kandahar Provinces. The Battle Group was dubbed the 'flying squad' by the media as it took the fight to the Taliban with aggressive helicopter assaults. The book follows the Battle Group's progress starting with pre-tour training and deployment. It describes, using first-hand accounts, the thirteen Battle Group operations including the Sangin Valley raids and the one wave assault at the start of Operation PANTHER'S CLAW. Also covered are the fighting patrols in Kandahar Province in an area known as the 'heart of darkness'.

Above all, this is a record of the achievements of every member of the Battle Group who were individually and collectively asked to do extraordinary things in the face of an highly experienced and ruthless enemy. Personal accounts and letters, supported by superb images, many taken by Battle Group members, vividly illustrate the paradox of conflict: the elation and fear of contact; the intensity of combat and the boredom of waiting; the calm of camp life and chaos of battle. The book exposes the humour, the grief, the hardship and the camaraderie experienced by soldiers on the front line of modern warfare. The vital contribution of those left behind, both Rear Party and families, is underlined. There were casualties and losses, each one felt deeply, and we see how the joy of the homecoming was tempered by these.

While members, families and friends of the Battle Group should see this as a personal tribute, others will find Aviation Assault Battle Group an inspiring account of the combined efforts of this highly professional, dedicated and courageous team. It is hoped that the book will also lead to a better understanding of what our Servicemen and women are achieving in this most dangerous and controversial of war zones.

This book could be considered as a tribute to all those soldiers of the 3rd Battalion who fought and died to preserve the common good of thousands of strangers caught in the debacle of a bloody and senseless war.

A book of human and military interest, with good visual documentation of uniforms, weaponry and combat zones.

Written by a range of soldiers and officers from the Battalion this account offers readers an inside look at the challenges, the chaos and the camaraderie that became the routine of daily lives. As an aviation assault battalion which was supported by Coalition helicopters, these solders and officers played a unique role during their time in Afghanistan.
The book is honoured with a foreword by HRH Prince Charles Duke of Rothesay, in which he praises the efforts and performances of the Battalion and voices the personal privilege he feels at being the Royal Colonel for this particular regiment.
The book is both heart-warming and heart-wrenching as the soldiers’ bonds are strengthened by friendship and weakened by death. This book offers people the chance to see this life-threatening job from the perspective of those who do it.
There were losses and loved ones left behind, but the in-depth, personal nature of this book ensured these efforts will never be forgotten.

This account of an operational tour in Afghanistan by the Black Watch, 3rd Battalion Royal Regiment of Scotland in 2009 is a splendid combination of words and pictures. The numerous photographs are reason enough to buy; together with informative captions they tell at a glance the remarkable story of the tour.
There is, however, a great deal more to this book than just pictures. The text has been written by many contributors, all eye witnesses to the major and routine events that punctuated the tour. Each contribution provides a first-hand description of daily life in action and in base. Not every contributor is a polished author but if anything this increases their impact.
Through their eyes and ears of the participants we begin to understand the extraordinary challenges they all faced; the heat and discomfort, the heavy loads, the instant change from calm to intense fire fight. In understanding we begin to see exactly how splendid all these men and women are and exactly how much they deserve our admiration.
I strongly recommend Aviation Assault Battle Group to any Legion member who wants to get into the guts of an operational tour in Afghanistan or who is looking for a Christmas present for any young man or woman who enjoys tales of derring-do.