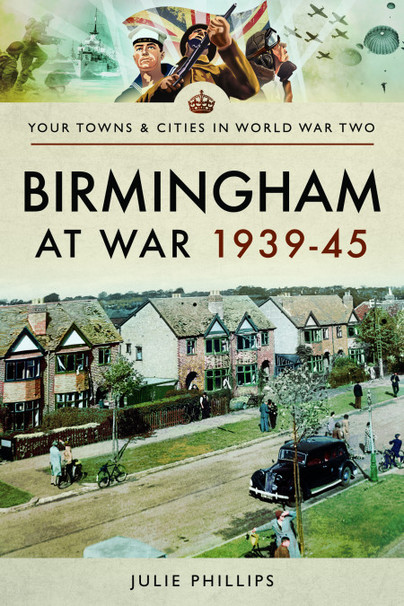 Click here for help on how to download our eBooks
Add to Basket
Add to Wishlist
You'll be £4.99 closer to your next £10.00 credit when you purchase Birmingham at War 1939-45. What's this?
Need a currency converter? Check XE.com for live rates

Barely 17 years after the Great War that had brought Britain to its knees, the country was once again asked to make sacrifices and give their all to the war effort. With its strong industrial background, Birmingham was already geared to help manufacture the vehicles that could be adapted for war use, and with the threat of the German Luftwaffe screaming across the skies, it was only right that the production of planes, most notably the spitfire, was ramped up to help protect the British public.

While many of its men and women were involved in the forces abroad, many more stayed behind to defend the city, with inhabitants risking their lives by taking up fire hoses, first aid kits, manning anti-aircraft guns and positioning barrage balloons in order to save others from the devastating destruction of the Blitz. Meanwhile, the city's children were separated from their families to escape the worst of the bombing and would return from their adventures changed: not all host evacuee families were as kind or as welcoming to their charges as it would appear.

Yet not everyone was so patriotic and keen to do their bit, and the opportunity for crime and to fiddle the rations with black market goods was rife. Not even Government issue equipment was off limits, as one Birmingham gang of sandbag thieves demonstrated.

For Birmingham, the Second World War was a time of great hardship and sacrifice and the hard work continued for many years after, as its people painstakingly rebuilt parts of the bomb-damaged city.

Well, where do you start with a subject as extensive as the experience of a city, and its people, during the Second World War? There are so many personal stories which could be told, and so many aspects of them to cover. So Telford historian and author Julie Phillips took on a real challenge in producing this book on Birmingham, part of a themed series by the publishers. And she's made a good fist of it, cramming in a lot of detail and memories.