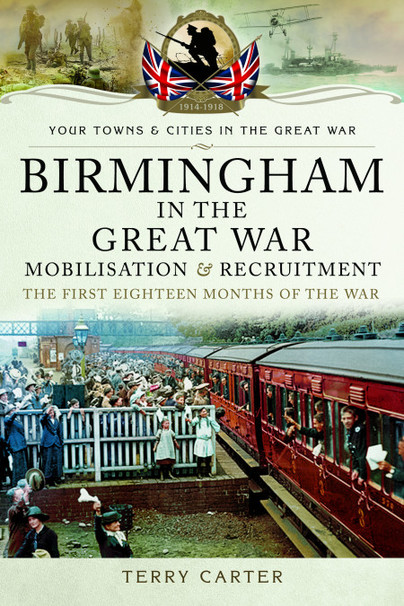 Birmingham in the Great War – Mobilisation and Recruitment (Kindle)

Click here for help on how to download our eBooks
Add to Basket
Add to Wishlist
You'll be £4.99 closer to your next £10.00 credit when you purchase Birmingham in the Great War – Mobilisation and Recruitment. What's this?
Need a currency converter? Check XE.com for live rates

How the experience of war impacted on the town, from the initial enthusiasm for sorting out the German kaiser in time for Christmas 1914, to the gradual realization of the enormity of human sacrifice the families of Birmingham were committed to as the war stretched out over the next four years. A record of the growing disillusion of the people, their tragedies and hardships and a determination to see it through.

Birmingham's part in the Great War is well documented from the production of Rifles and Lewis Guns at the B.S.A. to the mind boggling 25 million rifle cartridges produced weekly at Kynochs. Aeroplanes, Tanks, Armoured Cars, Military trucks, shell fuses, shell cases, Mills bombs and hundreds of other intricate parts needed to make military hardware. “The country, the empire and the world owe to the skill, the ingenuity, the industry and the resource of Birmingham a deep debt of gratitude,” to quote Prime Minister Lloyd George and former Minister of Munitions.
But that is only part of the story. Around 150,000 Birmingham men enlisted and sadly approximately 14,000 did not return. No story of Birmingham's war effort can be told without mentioning the wives, moms, sisters and girlfriends who toiled away night and day working in munitions. Four years of local war time newspapers have been trawled through unearthing personal experiences of Brummagem folk in the Great War.

5 STAR REVIEW - There are two words which should instantly recommend this title to anyone with even a passing interest in Birmingham during the First World War, and those words are "Terry" and "Carter". Terry's 1997 work on the Birmingham Pals remains a staple ingredient for anyone with an interest in Kitchener volunteers, pals battalions or Birmingham and this new publication in Pen & Sword's "Your towns and cities..."series is the ideal complement as it looks at Birmingham in the first 18 months of the war at a time when the pals battalions were recruiting and training. There are useful chapters on the 1st Southern General Hospital, Belgian refugees in Birmingham, HMS Lusitania, HMS Birmingham, the expansion of the Territorials and, of course, the pals battalions. One of the better books in this series, I would suggest, and well worth the £14.99 investment. Anything less should be considered a bargain.

Find My Past, Paul Nixon

Over 40 years ago I purchased a book, Birmingham and the Great War 1914 -1919 by R.H.Brazier & E. Sandford printed in 1921. That book changed the course of my life and developed my interest in Birmingham’s contribution and involvement in that war and my thirst for more knowledge. I read every book I could get my hands during my lunch breaks at work …some I enjoyed and went into my library and a few went into the dustbin …one that opened my eyes was Birmingham Pals by Terry Carter which came out in 1997.

I have known Terry for a number of years drank with him in the local watering hole and walked the battlefields of France with him a few years ago, so I know all about his passion for the subject he loves and his determination to leave a record of the Brummies who survived that terrible conflict and the ones who died.
After reviewing a book about the Boer War for Pen & Sword Books Ltd I was quite pleased when I got the chance to review Terry Carter’s new book Birmingham in the Great War
Most books about the Great War are full of facts but are hard to read, Terry’s book is full of facts and is easy to read with many never published before photographs.
Once again he has done Birmingham and the Brummies proud. The book is well worth reading and passing on down the generations and should be available in all our schools
I do not recommend many books or films so having read this one all I can say is
Well Done Terry and I cannot wait for the next one to be published.