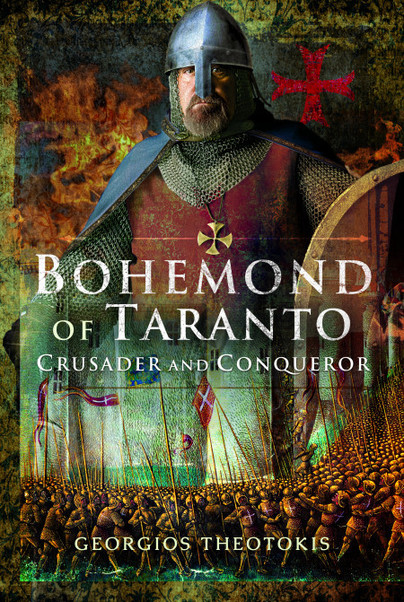 Click here for help on how to download our eBooks
Add to Basket
Add to Wishlist
You'll be £4.99 closer to your next £10.00 credit when you purchase Bohemond of Taranto. What's this?
Need a currency converter? Check XE.com for live rates

Theotokis does not fall into the trap of confining Bohemond’s military career to the Crusades, but gives due weight to his other activities, particularly his diplomatic successes and failures. Bohemond was a complex leader and warrior, and this biography does him justice.

The first book Bohemond of Taranto offers a broad and accessible biographical survey of this famous conqueror and crusader’s life, spanning from his involvement in the politics of Norman Italy and Robert Guiscard’s wars against the Byzantine Empire, through the First Crusade and foundation of the principality of Antioch, to his final campaign against the Byzantines in 1107-1108. It has clearly been written primarily for general readers and it does an admirable job of recreating the overall trajectory of Bohemond’s career. The later chapters, as well as Theotokis’ meticulous descriptions of Bohemond’s many campaigns, are particularly stimulating. From a scholarly perspective, this book’s engagement with the core questions surrounding Bohemond’s life are fairly conventional with no real revelations concerning major issues, such as his motivation for joining the crusade, his relations with Alexius Comnenus, or his relationship with his father. The book’s main academic contribution lies rather in its vivid and very detailed recreations of Robert Guiscard and Bohemond’s campaigns across the Adriatic. The level of detail offered here and the lucidity of Theotokis’ accounts of these campaigns is very impressive. This is especially true for Bohemond’s crusade against Alexius Comnenus in 1107-1108.

This new biography of Bohemond does much for renewing interest in the topic: an approachable work, its thorough engagement with the primary sources, and well-informed take on strategic and tactical issues, will make it a volume of interest to specialists in military history, and contributes another point of entry into Bohemond’s well-publicised, often controversial, but still much to be discussed career.

“This book, by historian Giorgios Theotokis, is the first biography of Bohemond in English since R. B. Yewdale’s Bohemond I, Prince of Antioch (1917). This book will be enjoyed by readers with an interest in the military history of the Crusades."

For my part, living in Calabria, a few kilometers from a small town called Gerace (I can see it from my window at this moment) where part of the enterprises of the two brothers Robert the Guiscard and Count Roger took place, I feel them much more nearer of any other historical figure, and I can only thank Dr. Georgios Theotokis for bringing this great military leader back into the spotlight.

"There have been few works about Bohemond in English, and this work helps bring him back into the light of historical study...The writing is clear and easy to follow through the complexities of the medieval world."

A seminal and meticulous work of simply outstanding scholarship, "Bohemond of Taranto: Crusader and Conqueror" is enhanced for academia with maps, a section of color plates, and informative Introduction, an Epilogue (Death and Heritage), 20 pages of Notes, a six page Bibliography, and a three page Index. An inherently fascinating and impressively informative study throughout, "Bohemond of Taranto: Crusader and Conqueror" is a very highly recommended addition to community, college and university library history collections.

This is a great book if you want to look at how War was conducted during this period. It is also a great look at a seemingly forgotten military commander.

I didn't know much about Bohemond before this book, but I am so glad that I read it! Wow! This book was full of great information, and it was broken down in such a way as to keep the reader from feeling overwhelmed and frustrated. There is a lot to learn about this man, and his role in the first crusade, but it also lays out the good, the bad, and the wow factors so very nicely!

Great weekend read if you are looking to learn something!

Dr. Georgios Theotokis gives us a masterful portrait of a genial ruler, his military prowess and a clear overview of the political & military shenanigans at play during the First Crusade.

I think Theotokis does an excellent job of showing the military strategies that made Bohemond such a dynamic leader. I found this account extremely fascinating and eye-opening on what one leader could do in a few decades.