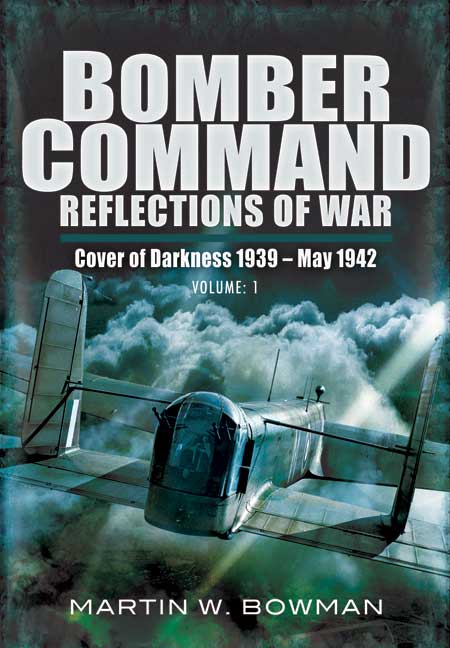 Click here for help on how to download our eBooks
Add to Basket
Add to Wishlist
Get Bomber Command: Reflections of War (Kindle) for FREE when you purchase 2 other eBooks.
Need a currency converter? Check XE.com for live rates

This is the first volume of a five part work that provides a comprehensive insight to the experiences of Bomber Command’s pilots and aircrew throughout World WarTwo. From the early wartime years when the RAF’s first attempts to avengeGermany’s onslaught were bedevilled by poor navigation and inaccurate bombing,to the final winning onslaught that finally tamed Hitler in his Berlin lair, these volumes trace the true experiences of the men who flew the bombers. Hundreds of first-hand accounts are complemented by the author’s background information that put each narrative into wartime perspective. Every aspect of Bomber Command's operational duties are covered; day and night bombing, precision low-level strikes, mass raids and operations throughout all wartime theatres.

This volume is full of accounts that tell of the camaraderie amongst the crews, moments of sheer terror and the stoic humour that provided the critical bond. The five volumes of this work provide the most vivid and comprehensive work on the outstanding part played by RAF Bomber Command in their vital role in the destruction of the Third Reich.

The book is written in a pleasant style, but serious enough for the reader to understand what these men went through. Amomentous work entailing a great deal of research but well worth the effort to put before the public the role of the men, who, without thought of the dangers and the consequences they might bring, volunteered to fly and were assigned to the bombers.

Covering the years 1939 to May 1942, this is the first volume of a five part work providing an insight into the experiences of Bomber Command throughout World War Two. It is incredibly detailed, and full of first hand accounts of life in Bomber Command. Each narrative is carefully placed into the wider perspective, showing how Bomber command steadily developed from its first awkward onslaughts on Germany. Problems of poor navigation and inaccurate bombing were endemic in these first few years. Some of the descriptions are extremely vivid such as planes coming back 'perforated like a cheese grater'. An interesting and unusual angle is the experience of an airforce wife, travelling illicitly to accompany their husbands from base to base, finding accommodation wherever they could just so that they could have some element of normal family life. Extremely detailed, this book will prove essential to anyone interested in military and airforce history. 3 stars.

Few campaigns wages during the Second World War continue to excite more hotly-contested debate than the RAF’s bombing offensive against Hitler’s Reich.
The scale of the assault was enormous. It dominated the nations war effort and the headlines. For four years it represented Britain’s only means of seriously hurting Hitler’s war machine. And the monumental nature of the undertaking is reflected in the five-volume history being compiled by Norwich-based aviation historian Martin Bowman.
Now he is putting the research of more than 30 years to great use as he embarks on an epic odyssey to record the successes and the failures that characterised the greatest bombing offensive in history. As ever the accent is on the men at the sharp end and their stories, often told in their own words are at the heart of his story. In the first of the Bomber Command: Reflections of War series, Bowman traces the early struggles and setbacks as the RAF crews climbed a steep learning curve in their attempts to make an effective contribution to Britain’s war effort.

A clear chronology of the bombing campaign. This will be a series worth collecting.